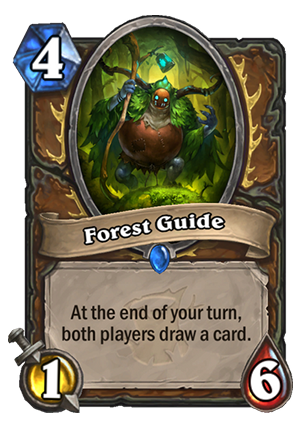 Forest Guide is a 4 Mana Cost Rare Druid Minion card from the The Witchwood set!

At the end of your turn, both players draw a card.

So, I like seeing them experiment with different stat-lines and different effects. This is something we have never seen before. I like the art especially, but I feel like I will never see it in an actual game after the pack opening.

First of all, stat-line. Believe it or not, but it’s important even on minions with cool effects. 1/6 for 4 is TERRIBLE. It’s a worse Mogu'shan Warden, and that comes with Taunt at least. This will be either ignored or traded nearly for free. There is no chance that dropping a 1/6 will make your board scary or anything.

Then, the effect. This is the interesting part. Since it’s an end of turn effect, it will happen at least once. But you’re still in the losing position, since your opponent will take advantage of his extra card first. This card is straight up unplayable against Aggro – not only is it super slow and doesn’t contest anything, but giving them extra cards is not good at all.

So this card is trash, right? Well, maybe not. Right now it looks like that, but there might be something going on for it. First of all – Hand Druid synergy. It seems like it’s a thing they’re going for this expansion (Wispering Woods), and we might get more cards benefiting from a high card count. Still, given that you force both you and your opponent to draw cards, this won’t likely survive more than a turn if such strategy is really a thing, wouldn’t it be better to let’s say play some other card draw? I don’t know, Acolyte of Pain costs 1 less and can draw more than one. Even Gnomish Inventor seems like a better pick in such a deck.

But, another strategy this might fit into is… Mill/Fatigue Druid! While not good in Standard, it’s actually a thing in the Wild. As for Fatigue, I don’t think that it will work, because the deck plays a bit differently. But the Mill variant could actually use it. Druid gets another way to force the opponent to draw cards. However, I have another counter-point – Druid already has a card like that, which feels better – Grove Tender. Yes, this is not an ongoing effect, but it costs 1 less and has a much better stat-line for its cost. Can you afford to play both in your deck?

Those are all valid points, but… Right now, there is not much going on for Hand Druid yet, and the Mill strategy is not something viable in Standard (especially now that Coldlight Oracle will be gone), so right now this card looks bad. But I wouldn’t immediately dismiss it, because believe me or not, it actually has SOME potential to be played, even if in an off-meta deck.