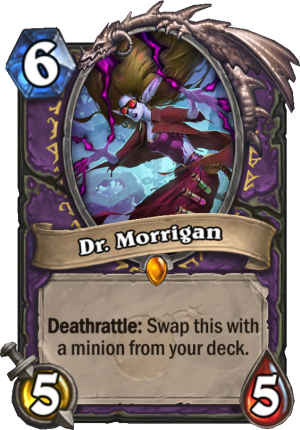 Dr. Morrigan is a 6 Mana Cost Legendary Warlock Minion card from the The Boomsday Project set!

Deathrattle: Swap this with a minion from your deck.

She will NOT STOP until she gets tenure.
Tweet

This card just seems… bad. Theoretically you can go for the “infinite loop” with Baleful Banker, but you need to build an entire deck around it, and it’s still not consistent. Not to mention that if it just gets Silenced or Transformed, that’s it for the infinite plan. No, it’s not a combo you build your deck around.

So maybe build a deck around big minions only? This will have 100% chance to pull something good then. But what’s the point? It costs 8 mana, that’s not much of a cheating. Just look how weaker Possessed Lackey got after nerfing it to 6 mana, and it’s still 2 mana cheaper than that. Playing 8 mana to pull a 10 mana minion doesn’t seem like the most efficient thing ever.

And running it in a regular Warlock deck seems outright terrible. Even the non-Zoo Warlock decks run multiple small minions – Kobold Librarian, Doomsayer, Plated Beetle, Gnomeferatu, Vulgar Homunculus, Stonehill Defender etc. Those are terrible pulls. The card can also be Silenced before you pull anything and you spent 8 mana on a 5/5 minion. And even if you high roll into a Voidlord for example, it’s still not very impressive. You had to pay pretty much the same mana cost, and got an extra 5/5 body for one card.

You theoretically can do some Carnivorous Cube shenanigans on this card, but you can’t play those two together and it’s incredibly vulnerable to Silence, like I’ve mentioned before. If it works, then you can either pull a bunch of high value minions or just more copies of Morrigan. But the question is – how consistently will it work? My guess is that not consistently at all.

So unless I’m completely missing something, this card is just bad. Might be played in some meme deck, but I don’t see it seeing play with the current pool of cards. But Blizzard will probably troll me and reveal some sick synergies after I’ve already said that this card is trash.