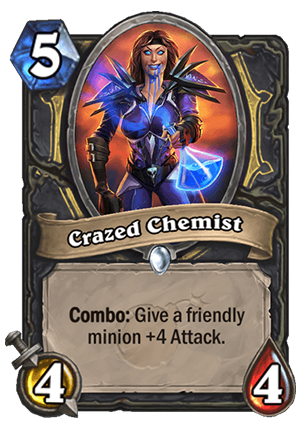 Crazed Chemist is a 5 Mana Cost Common Rogue Minion card from the The Boomsday Project set!

Combo: Give a friendly minion +4 Attack.

You don't have to be crazy to work here, but it helps.
Tweet

This is like a 5 mana 4/4 with Cold Blood effect. Since it’s Combo not a Battlecry, it’s a bit harder to make it work, but it’s still really big. I could totally see Odd Rogue wanting to run it. A permanent +4 Attack buff is very powerful, especially if you add a body. I feel like this might replace Cobalt Scalebane. While Scalebane has a better body, this being an immediate effect makes it significantly better. Scalebane has a high chance to buff a minion you will never get to attack with, and in case of this, you will very often buff something to trade up or just push for immediate extra 4 face damage.

You can play it with Southsea Deckhand on Turn 6 to get a 6/1 with Charge and a 4/4, really solid play. On top of that, Odd Rogue sticking any minion on the board will be even more deadly. I think that this card will see a bit of play. I feel like it’s still worse than Fungalmancer, because it doesn’t buff health, but Scalebane is often too slow in that deck, unlike this card. The only issue is that activating combo on a 5 mana card is not always easy, but Odd Rogue can already make it work on Vilespine Slayer.