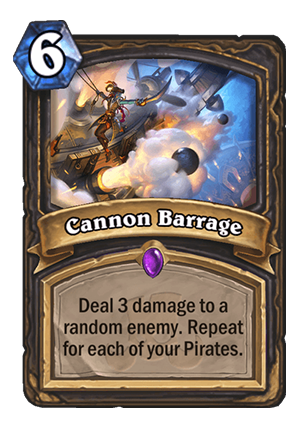 Deal 3 damage to a random enemy. Repeat for each of your Pirates.

Why fire your cannons strategically when you can fire them all at once?
Tweet

Pirate synergy in Rogue! I was actually waiting to see some. Rogue was always in a weird spot when it comes to Pirates. At times, it had enough Pirate cards / synergies to for a Pirate deck to ALMOST be viable, but it was never good enough.

It’s an interesting card, and it can actually be a solid finisher in Pirate Rogue deck. However, in order for it to work, you can’t just run a Pirate package and call it a day. You need a full-fledged Pirate deck, when most of your minions are Pirates. If you have 3 Pirates on the board, which is kind of a good, but not the best case scenario, this is 4x 3 damage for 6 mana – 12 in total. Ideally you would want for it to go face most of the time, but sometimes clearing minions can also be good, especially if you aren’t winning the game yet. Even with 2 Pirates, that’s 9 damage in total, which is not terrible (comparable to Avenging Wrath, but it’s 3x 3 instead of 8x 1, for better or for worse).

Still, there are a few problems. First of all – you need a Pirate Rogue to be viable. Right now there aren’t even enough Pirates to support a half of Pirate deck, so this expansion will have to do A LOT of work in order for this card to work. Second problem is the fact that this card is a bit win-more. It works best when you already have a bunch of Pirates on the board, and at that point you have  a relatively high chance to win. However, it’s not EXACTLY like that – it’s in the same way that Savage Roar is a win more card. Having 3-4 small pirates doesn’t mean that you’re winning the game, and this can push enough damage to finish the opponent. Savage Roar is actually a good comparison – this is like a Pirate Savage Roar for Rogue.

It also combos nicely with the new Sharkfin Fan – it can spawn a bunch of 1/1’s which then deal 3 extra damage each with Barrage.

The card has a higher chance of seeing play in the Wild, actually. But it might be playable in Standard in case enough Pirate synergy gets printed.

Card rating: 3/10 right now, but might be much higher if Rogue gets enough good Pirates to build a deck around them 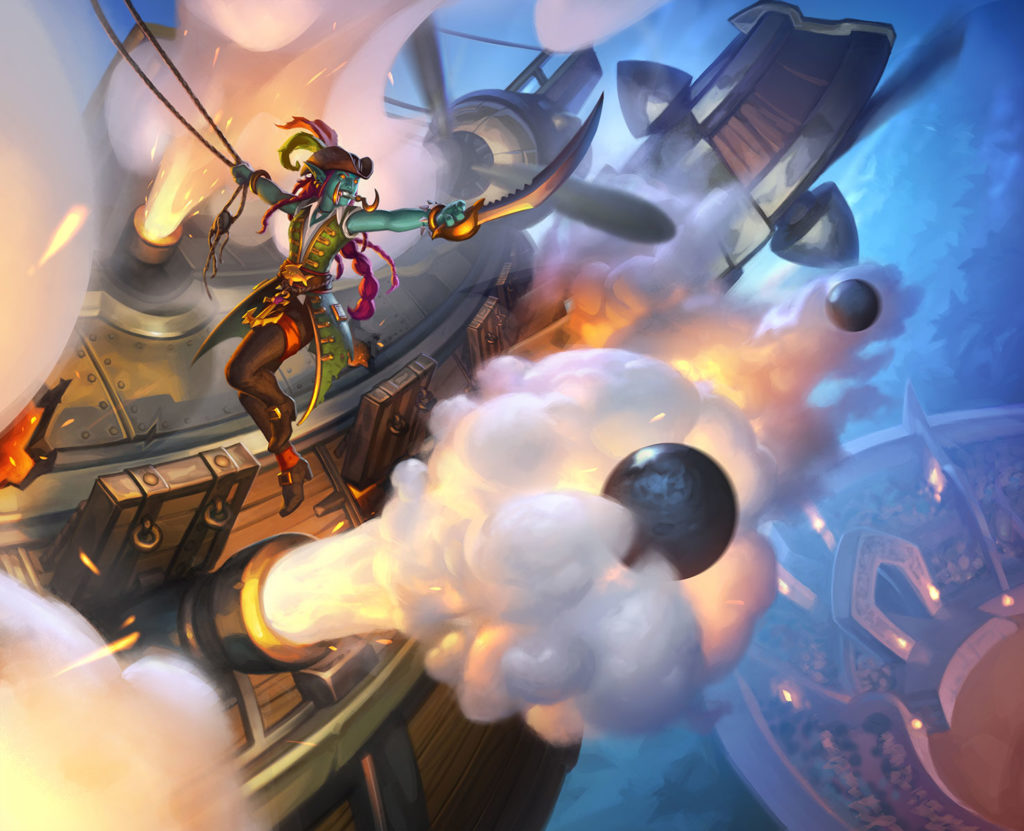