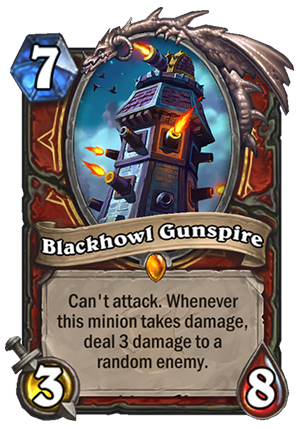 Blackhowl Gunspire is a 7 Mana Cost Legendary Warrior Minion card from the The Witchwood set!

Can't Attack. Whenever this takes damage, deal 3 damage to a random enemy.

The upper windows used to be for aiming. Then we thought: "Hey! MORE cannons!"
Tweet

Even though I don’t think this card is particularly powerful, I like it. The flavor is really nice – you have a huge tower that can’t attack itself, but fires back every time it gets damaged.

Even though the 3/8 stat-line is not huge, you COULD say that it has 6 attack, just the 3 of it has a random target. 6/8 for 7 is still not that good, but the strong part about this minion is that it heavily benefits from every Whirlwind effect you play. It basically turns every Whirlwind into a sort of Swipe on a random enemy, which is cool.

Random enemy means that you could potentially use it as a combo piece, e.g. with Bouncing Blade in Wild, but it might be harder to pull off in Standard.

However, the card has lots of flaws. First of all, the stats aren’t that exciting. Even if we think of it as of a 6/8, it’s still not great. Then, the mana cost means that it’s hard to combo immediately – just think about how hard it is to get multiple Legendaries from the Rotface. And finally – yeah, Rotface. While it’s 1 mana more expensive, its effect is much more powerful. Summoning a random Legendary is way, way better than dealing 3 damage to a random target (unless you specifically build a combo around dealing damage). And, to be honest, I don’t see Rotface being overpowered, it doesn’t even get much play.

Plus, it’s difficult to just “drop it” like that without immediately comboing it, because if it gets destroyed by Siphon Soul, Polymorph, even Shadow Word: Pain, you get no value at all. Even if it gets cleared by a single hit or spell (e.g. Meteor), then it’s meh, but at least you dealt 3 damage.

This card would be significantly better with one simple change – Taunt. Right now, playing it against a faster deck can be pretty risky, because you don’t get any immediate value and you open yourself to just… dying to the board.

This card is pretty cool and I like the design, but I don’t think it will see much play. When it comes to power level, it’s probably below average. I’m not completely dismissing it, because Warrior might get more synergies, and building a deck oriented around Whirlwind effects might be a thing (Scourgelord Garrosh approves). Right now it’s only like a 3/10 though.

P.S. They should have called it “Blackhowl Moving Turret”! (reference if someone doesn’t get it) 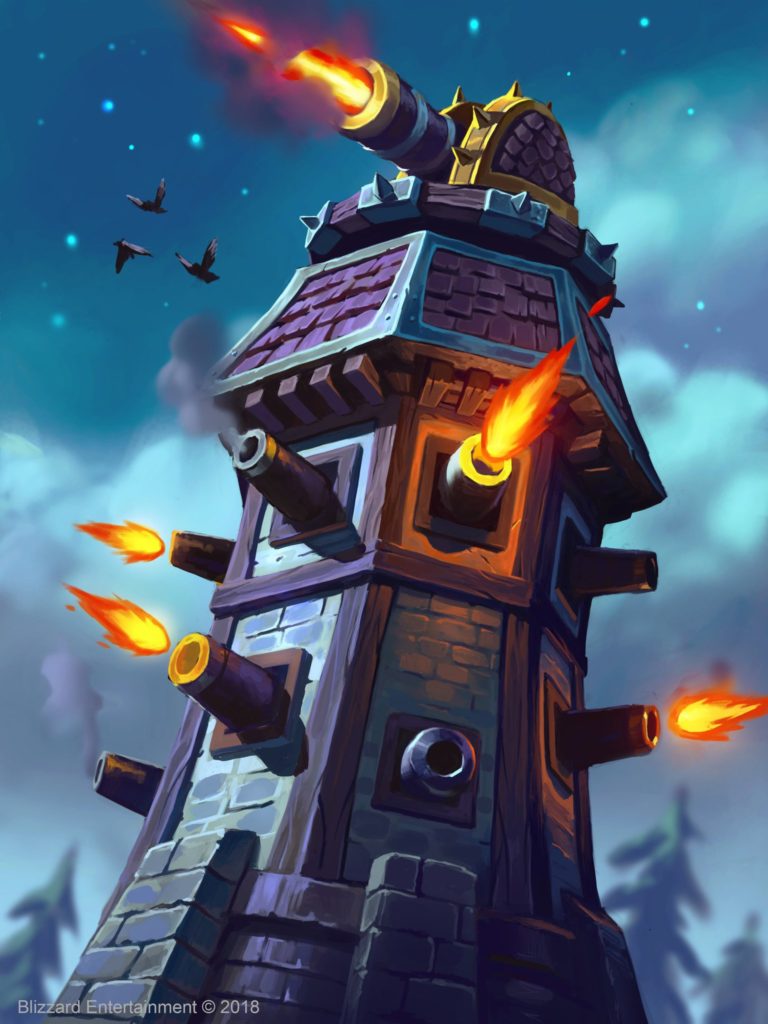