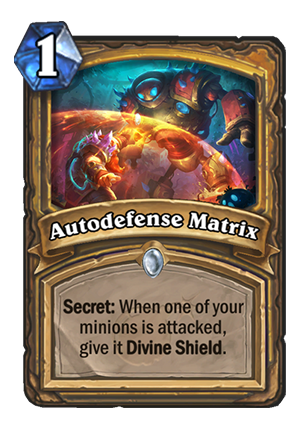 Autodefense Matrix is a 1 Mana Cost Common Paladin Spell card from the The Boomsday Project set!

Secret: When one of your minions is attacked, give it Divine Shield.

I’m always curious to see more Paladin Secrets. They’re the hardest ones to balance. On the one hand, they need to be pretty powerful for a 1 mana card to be viable. On the other hand, it seems like they want to keep their power level toned down after Avenge was a staple in multiple Paladin decks for a long while.

If I had to compare Autodefense Matrix to something, it would probably be Noble Sacrifice or Redemption. Similarly to Noble Sacrifice, when one of the minions is attacked, the attack is basically blocked – by a 2/1 minion or in this case by an extra Divine Shield. Unlike Noble Sacrifice, though, your opponent has the ability to choose the target, and face hits don’t get blocked. If he attacks a 1/1, that’s like having a 1/1 version of Noble Sacrifice. But if he attacks a 5/5, well, now his minion probably dies and your lives. On the other hand, it’s similar to Redemption in a way that it protects the chosen minion. When you have something that your opponent really wants to kill on the board, then Autodefense Matrix will make it way more durable.

In the right scenario, this Secret can be really powerful. You just buffed your minion with Blessing of Kings and you don’t want it to die? Well, giving it a Divine Shield when it’s attacked might be great.

On the other hand, Autodefense Matrix has a few downsides too. It’s bad in any deck that wants to summon a lot of 1/1’s, such as Odd Paladin. Giving your 1/1 a Divine Shield for a cost of 1 mana AND a card is just bad. You’d rather just drop a 1-drop like Argent Squire or Righteous Protector. Another downside is that it only stops ATTACKS, not spells. If your opponent Fireballs your 5/5, then it won’t get a Divine Shield. It can also be played around quite easily if you identify that it’s THE Secret your opponent runs – so it’s really a bad Secret to put into your deck alone. Oh, and it’s really bad when you play lots of minions with Divine Shield. If your opponent attacks one with this Secret in play, it basically does nothing – it gives DS to a minion, which already has one.

I mean, you can already give Divine Shield for 1 mana. Reliably, to the target you want. On your turn, so you can trade with it immediately and get the value. Yet Hand of Protection sees no play at all. I know that they’re different, but both have their upsides and downsides. Noble Sacrifice also sees no play, so why would this card be different?

The only deck I could see this working in right now is Secret Paladin. It has got some support last expansion with Bellringer Sentry, but that card alone wasn’t enough. Adding Autodefense Matrix might make Secrets harder to play around – when you run 3-4 different Secrets, they can get much more value when your opponent simply plays around the wrong one. But right now, the deck still doesn’t look very promising. The card is probably a bit better than Noble Sac, but Noble Sac isn’t great to begin with, so in the end its quite average. Pretty easy to play around and has no synergy with lots of Paladin stuff (Hero Power, Righteous Protector and other DS minions etc.).