The patch is out now! Once people playtest the new decks, we’ll be adding them to this post.

The upcoming balance update is pretty major and we should see some meta shifts after it’s released. With 8 card nerfs and 4 card buffs, we expect to see some new decks. The thing is that not only the decks directly affected will be hurt. For example – Demon Hunter. Because Demon Hunter is nerfed, it will show up less, so any deck targeting DH will automatically become weaker (like Enrage Warrior, which is also getting a nerf on top of that). On the other hand, some deck that was held back by DH might pop out when the class becomes less popular.

What’s interesting is that we’re also getting some card buffs. Shaman is the biggest winner here – three Control-oriented cards are getting buffed. We will definitely see people playtesting Control / Highlander builds, but whether they stay as a part of the meta remains to be seen. And then we’ve got Libram / Pure Paladin – with Aldor Attendant being a 1 mana 1/3 now, those decks definitely got stronger, but since the change is rather minor and it’s only one card, it’s hard to say whether it will be a part of the meta. Attendant’s change by itself shouldn’t make that big of an impact, but maybe if we combine it with all the nerfs, it might be good enough.

Here’s a quick reminder of the coming changes: 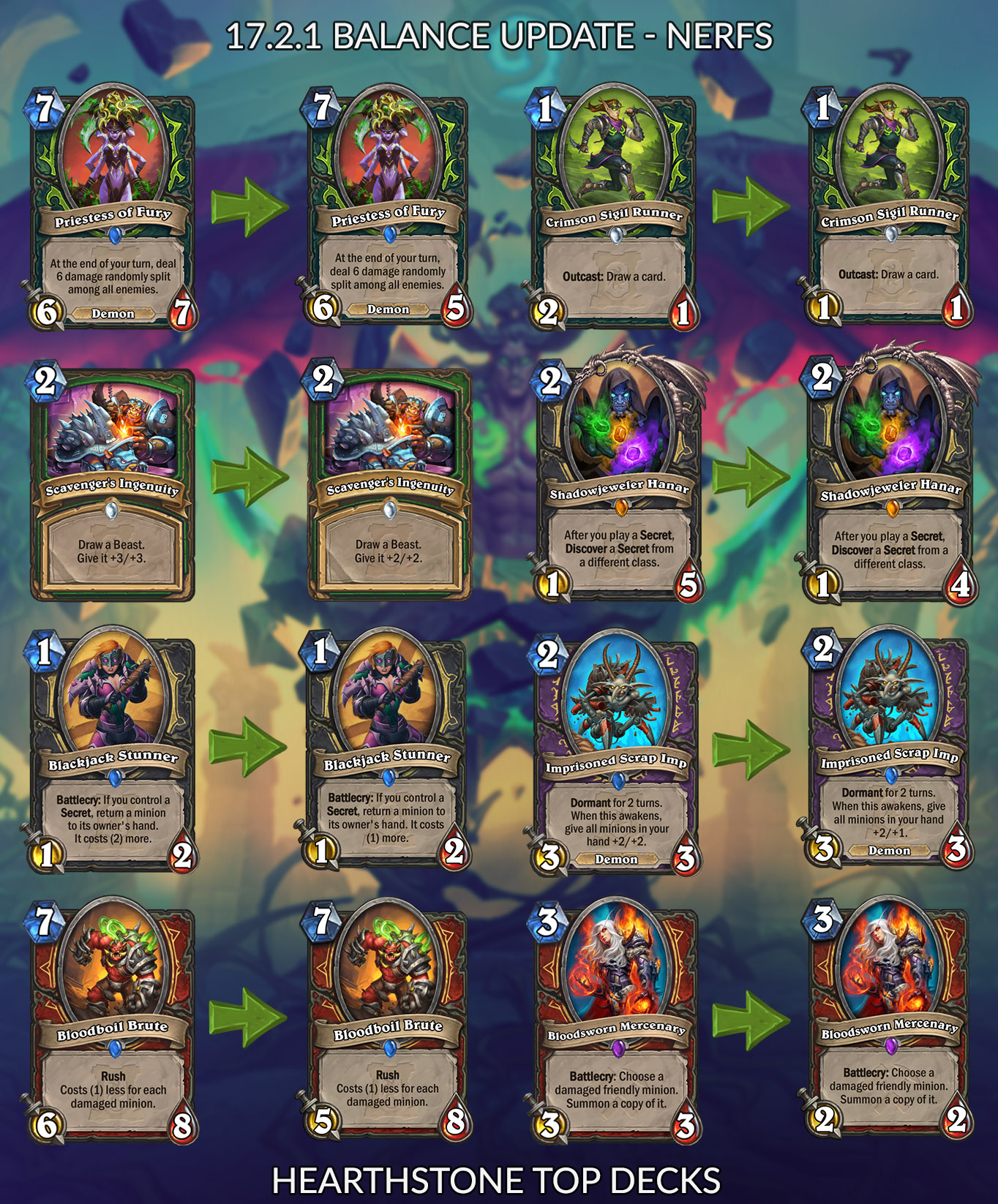 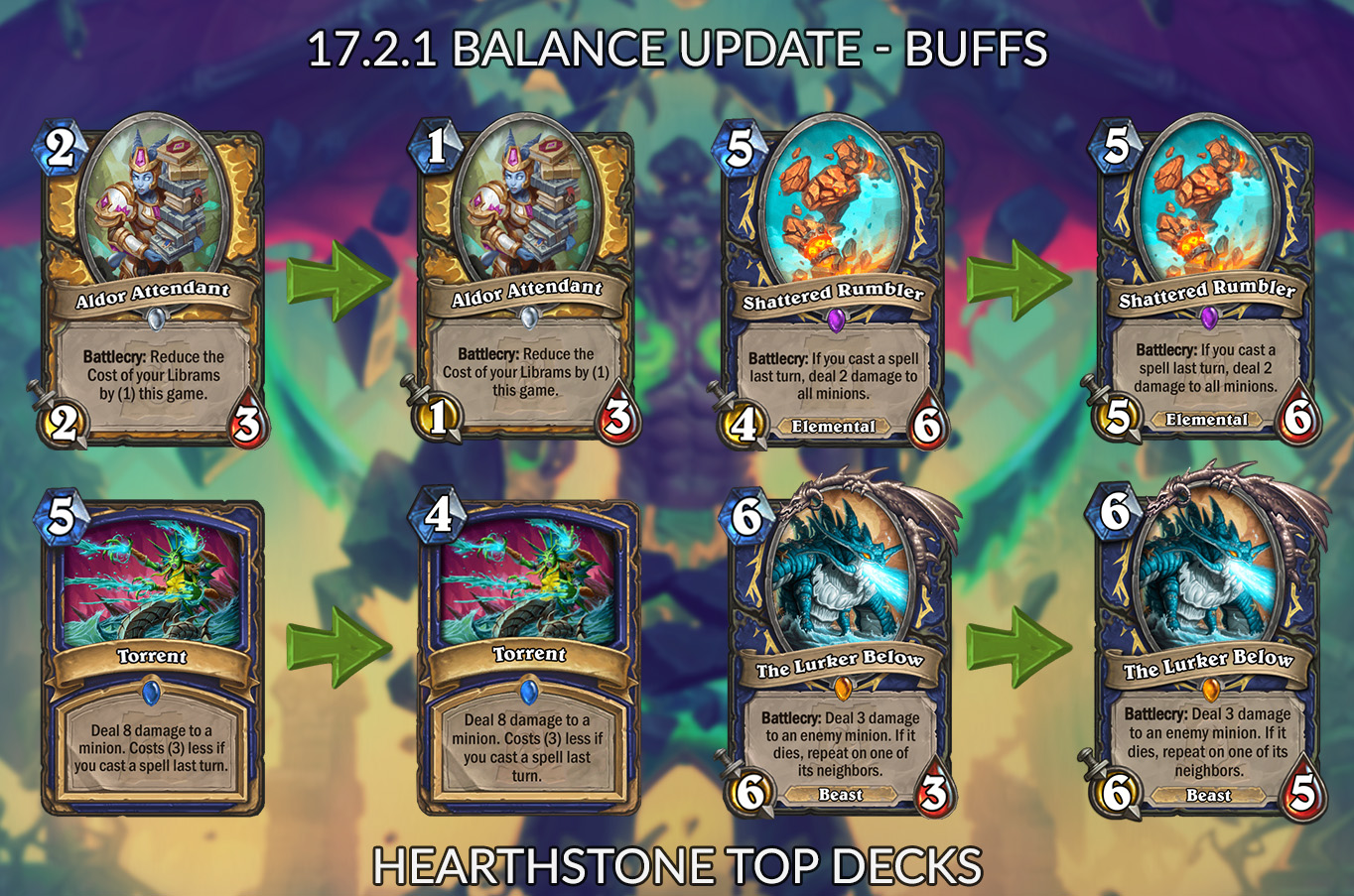 Should I Disenchant Nerfed Cards?

This is a very common question, and the answer is always simple – YES, you should disenchant them! All of them, for that matter. Just dust every nerfed cards the moment update is live (unless you plan to play the nerfed version right away). Why? Because you will never lose out anything that way. Nerfed cards are always disenchanted for their full crafting cost (so 40 for Commons, 100 for Rares, 400 for Epics and 1,600 for Legendaries). It’s always better to have a dust equivalent of a card instead of a card. If you have 1.6k Dust – you can use it to craft any Legendary you want, but also let’s say 4 Epics that you need. It’s much more flexible. And if you have a given Legendary* – that’s it, you’re stuck with it no matter what.

Let’s say that a certain Legendary was nerfed. You disenchant it and get 1,600 Arcane Dust. But as it turns out, the Legendary starts to be viable again a few months from now. You can craft it again for 1,600 Arcane Dust (which you gained previously for dusting it). Which means that in the grand scheme of things, you didn’t gain or lose anything.  But for those few months, you will have extra Dust you can spend on something else you might need in the meantime. You can, for example, craft another viable meta Legendary (like Zephrys the Great or Kronx Dragonhoof) and use it in multiple builds. However, if the Legendary turns out to never see play again (which sometimes happens with nerfed cards), you’ve just gained a lot of extra Dust.

Now a different scenario – someone told you to save X Legendary, because it should see play in the future. In case it does see play in a few months, you still have it, so there was no gain or loss in terms of Dust (but the Dust was “frozen” for that time, whereas in the example above, you could use it for something else). But now, if the Legendary does NOT see play, you’re stuck with a bad Legendary that you can either ignore or disenchant for 400 Dust. Either way, it’s a huge dust loss. You might not care if you pre-order every set and have most of the cards you need anyway, but it’s a huge difference for F2P / budget players.

* You can replace Legendary with any other rarity here. It’s just easiest to showcase on Legendaries, since they give you most Dust.

We’ll be featuring a bunch of Post-Nerf decks from pros & streamers. Keep in mind that the early meta can be volatile, not as much as when the expansion releases, but still. A certain deck working quite well right after the nerfs (when players haven’t figured out what’s best yet) doesn’t necessarily mean that it will stay as a part of the meta. So I would not recommend doing any extensive card crafting for the first few days. Just wait it out and see which decks end up sticking.