Demon Hunter was officially released alongside Ashes of Outland expansion, over a month ago. It’s the 10th Hearthstone class, and the first time the devs have attempted to add a new one. Previously, we’ve played with 9 classes ever since 2013. Yeah, it’s been a while. As someone who has played since Closed Beta, I never imagined that Blizzard will decide to pull the trigger and do it.

However, the release was a total rollercoaster of emotions. On the one hand, we’ve finally got something new, something fresh to play with. On the other hand, Demon Hunter has turned out to be absolutely broken, its release has lead to the quickest nerf patch in the history (and then two more balance updates targeting it, among the others), and LOTS of players have complained – I haven’t seen so much hatred towards a single deck/class in a long time (okay, maybe except Priest… I’m sorry Anduin, everyone hates you).

In a hindsight, it’s pretty clear that it wasn’t the most successful release. But it wasn’t all bad. In fact, I believe that overall there are more positive things to look at, and the negatives can get fixed over time.

What Went Wrong – Struggle of Developers

It’s clear that Team 5 wasn’t experienced when it comes to adding new classes. They had to overcome a lot of difficulties, and dealing with many of them wasn’t easy.

The first difficult choice was power level of the new class. Making it too weak would feel terrible for the players. Everyone would be excited to play it, and then they would be so disappointed if it ended up being unplayable. So between making it too strong and too weak, the former is clearly better. And that’s the idea devs had in mind when tuning the new class. Because of that, Demon Hunter’s power level is the first and most important thing that went wrong. Demon Hunter cards were simply too strong. 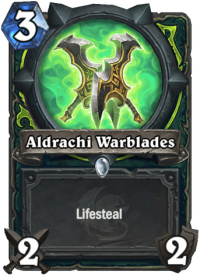 While I get the idea that they were supposed to be good, the insane power level lead to exactly the opposite of what Team 5 has tried to avoid. Instead of no one playing the new class, EVERYONE was playing it. At one point, during the first day, Demon Hunter had well over 60% play rate (and some builds had over 70% win rate – but take this number with a grain of salt because of very limited early data and no one figuring out how to counter it yet). Even after two nerf patches, Tempo Demon Hunter was STILL one of the strongest and the most popular deck. A third nerf patch just went through and it’s too early to tell whether it was finally brought back in line with other classes (but it seems that way).

Another issue with balance is the number of cards. Other classes had years of development. Even in Standard, they had access to Basic, Classic, as well as four full expansions. It wasn’t feasible to release so many Demon Hunter cards at the same time. Since the class has less cards, each of them needs to have a bigger impact. There’s little room for “filler” or “meme” cards, they had to attempt to make everything as playable as possible.

Cards also had to be “self-contained” – it’s not uncommon for classes to keep getting more support for a certain mechanic/synergy over multiple sets. In case of Demon Hunter, they couldn’t really do it – the synergies had to be working NOW. Given that it’s only the beginning of a Standard year, other classes had a lot of unfinished synergies. Since the class has less cards, they didn’t want to “open” a few synergy paths and leave them hanging until future expansions (but it’s something that they can do from now on). 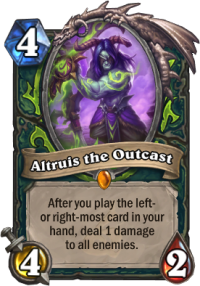 What’s even worse is that majority of the strong Demon Hunter cards are cheap. There are lots of staples in the free Demon Hunter Initiate set, while Commons and Rares from Ashes of Outland are also very powerful. You can build a really good deck without using any Epics or Legendaries. It means that the class is even more dominating at lower ranks, especially new player ranks, when nearly everyone is running a Basic deck (and a “Basic” Demon Hunter deck obliterates any other class).

And that’s the thing – most of the early Demon Hunter issues were (and still somewhat are) related to power level. And that’s… great! They can balance the class, but it’s much harder to make it flavorful, mechanically interesting or fun.

The only non-balance issue I have with DH is that Aggro/Tempo is the only viable build. Early in the meta, we also had a really cool OTK build, but it disappeared after the second wave of nerfs. During the first few days, some players have also attempted to play Token and Big Demon builds, but they fell short. I feel like on top of nerfing Tempo version, Blizzard should also make some small buffs for the other archetypes. Target cards that are only played in those, make them slightly better – maybe that would bring more diversity to the class. For example, I’m a big fan of the idea behind Token Demon Hunter (that instead of buffing the tokens, you want to sacrifice them for some extra effects), but it’s just not good enough. Hopefully, other DH decks will become viable after next expansion.

First and most importantly – we now know that adding new classes to the game is not out of question. I wouldn’t be surprised if we got another one in the future (such as Monk, it seems most likely). Probably in a rather distant future – I wouldn’t expect to see anything for the next 2-3 years at the very least. But it’s good to know that Blizzard is not afraid to experiment on that level. Something that I, and probably many players, have never expected to happen – happened. While in the early days I was still hopeful, after seeing Knights of the Frozen Throne’s implementation of “Death Knights”, I figured out that it’s how it will work from now on. But as it turns out, it’s not the case. And talking about Death Knight, I hope that they will implement them as an actual class too, eventually.  There’s a lot of potential, having another “darker” class to balance things out wouldn’t be a bad thing at all.

Second thing – we know that Blizzard is not afraid to experiment in general. As much as I liked Ben Brode, at the time he was a Hearthstone’s director, Team 5’s approach was way too cautious and safe. For the last year, and especially for the last few months, they’ve been way more aggressive. More and quicker balance updates, buffs on top of nerfs, new modes (Battlegrounds + another one on the way)… and a new class is the best testament to their new way of handling things. 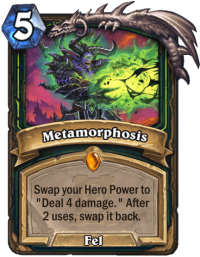 Third – say what you want, but Demon Hunter is fun to play (if you’re into faster play style, that is). Altruis the Outcast was broken at the beginning and it’s still strong, but pulling of a great Altruis turn after setting it up for the entire game feels amazing. The entire class fantasy is cool. I dig playing Kayn Sunfury and just passing through all the Taunts, dropping Metamorphosis to upgrade my Hero Power temporarily and even all six slashes from Priestess of Fury just feel good. At the time it was viable, the OTK DH strategy with Inner Demon was also incredibly fun – smacking opponent into face for 20 is something you rarely do in Hearthstone, but it’s very satisfying (and I remember managing to pull out Doomhammer from Zephrys on the second Day of the expansion just to kill my opponent from full health next turn). Trying to manipulate your hand so your Outcast cards will land on the left or right is also a fun mini-game (although I have expected it to be a bit more skillful than it is right now, hopefully things will change in slower builds). Having 1 mana Hero Power also feels different, but different in a good way. You plan your turns differently than you would with other classes. It will be tougher to balance, but as long as they pull it off, it will be all good. Now I’m waiting for a 3 mana Hero Power with some pretty strong effect. Like I’ve said in the previous section, the only thing I’m sad about is how weak are other archetypes. While I didn’t have much hope for Big Demon version (at least not yet – it has potential with 2-3 more support cards), I thought that Tokens will be better.

And fourth – it might not be a big deal, but Illidan is one of the most iconic characters in Warcraft’s lore. People love him. I have friends who never were into anything Warcraft-related, and they know the character. My brother used Illidan as avatar on some online forums when he was younger even though he didn’t even play Warcraft. Demon Hunter class itself is also “badass”, something that draws younger audience in particular. While it’s hard to measure its impact, I’m absolutely sure that it brought back a bunch of old players (who have fond memories of W3, for example), as well as some new blood. And that’s what Hearthstone needs. The game has been in decline for a while. No, it’s not a “dead game” like some people like to suggest, but it’s clearly much less popular than during its peak. So every player who goes back or starts playing thanks to Demon Hunter is an amazing thing for the whole Hearthstone community.

At this point you pretty much know what I wanted to say. Ever since Illidan’s release, I’ve read so many comments saying that it was a mistake, that Blizzard shouldn’t have done that and so on. And I completely disagree. Yes, the release has been messy and I think that Team 5 could do it much better. But Hearthstone desperately needed something new other than just a constant and predictable flow of expansions and reskins of Dungeon Run. It was getting boring, stale. I’d much rather suffer through a period of insane, imbalanced meta and then have more diversity and fun than repeat the same Groundhog Day-ish 4 months expansion cycle over and over again with no new additions.

Of course, I also hope that Blizzard will be able to handle the 10th class. Next expansion will be a big test – DH will again get 15 cards, so we’ll see whether they will support a few different archetypes and push them into viability without making them too strong. Yes, it will be a difficult task. But a necessary one if they want to keep Hearthstone as the #1 digital card game.

And what do you think about this release? Ignoring the balance issues, do you like Demon Hunter? Do you agree with the decision to release 10th class? Share your thoughts in the comments!