Interesting change being made soon. The Enrage keyword is being removed and the effect is being spelled out instead.

First things first: we’re removing the Enrage keyword from Hearthstone.  All the Enrage cards will keep their effects; we’re just rewording them without the keyword.  For example, Angry Chicken will read “Has +5 Attack while damaged.”

Our goal with this change is to clean up the game a little by removing a keyword we weren’t using much, but we also wanted to take the opportunity to share some of our general philosophy on keywords.

Keywords in Hearthstone are the bolded words in the card text – they’re words that have a special meaning in the context of the game.  We use them a lot; most of our sets have introduced at least one keyword and the Basic and Classic sets have a bunch.  Why are keywords helpful?

So why not make lots and lots of keywords?  In the extreme, we could keyword everything – the “Kel’Thuzading” keyword would mean “At the end of each turn, summon all friendly minions that died this turn” and the Doomsaying keyword would mean “At the start of your turn, destroy ALL minions.” That feels a bit silly – because it is!  Keywords aren’t all upside, so it’s worth taking a look at which keywords are worth keeping.

Ultimately, we have keywords to make cards easier to understand.  The best keywords appear a lot, are flavorful, and give us useful mechanical hooks.   In the last year, we added two examples that we expect to be permanent: Poisonous and Lifesteal.  These are great abilities that make minions a bit more interesting – they alter combat math, change which minions you prioritize, and spice up gameplay.  The full text for both of these abilities is also fairly long – without a keyword, it’d be hard to pair them with much else. 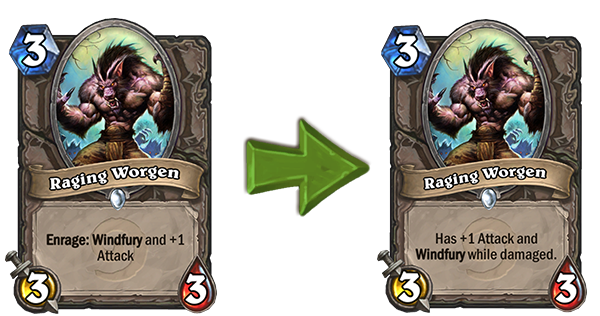 So let’s take a look at Enrage.   Enrage means “While damaged, this minion has a new power.”  It’s on nine cards: six from the Basic and Classic sets, two from Whispers of the Old Gods, and one from Goblins vs. Gnomes.  Part of the reason we haven’t used it much is that it’s a difficult keyword to design for: minions in Hearthstone don’t survive very long, especially once they’ve been damaged.  Instead, we’ve favored cards with triggered abilities that encourage you to damage them multiple times, like Acolyte of Pain and Rotface.  These lead to more interesting gameplay as you try to maximize the number of times they get damaged.

How well, then, is Enrage serving us as a keyword?  First, it’s not clear that Enrage is actually any easier to understand than “while damaged”.  It is certainly flavorful though, and does shrink the card text a little.  On the other hand, we haven’t made any cards that key off of Enrage minions and aren’t likely to in the future.  Overall, Enrage isn’t doing very much work for us, we haven’t used it in a while, and it isn’t on very many cards, so we’re cleaning up the game a little bit and removing it.

Thanks for reading, and we’ll see you in the Tavern!