Joemag, Hearthstone Associate Game Designer, did a retrospective of some of his favorite Tavern Brawls from 2018 on Twitter. It’s an interesting inside look at some of the Brawls we got to take part of in the previous year. Take a trip down memory lane, and let us know which were your favorite!

With 2018 coming to a close I want to take some time and do a little retrospective on some of my favorite Tavern Brawls from this last year. Join me, won’t you? – Source 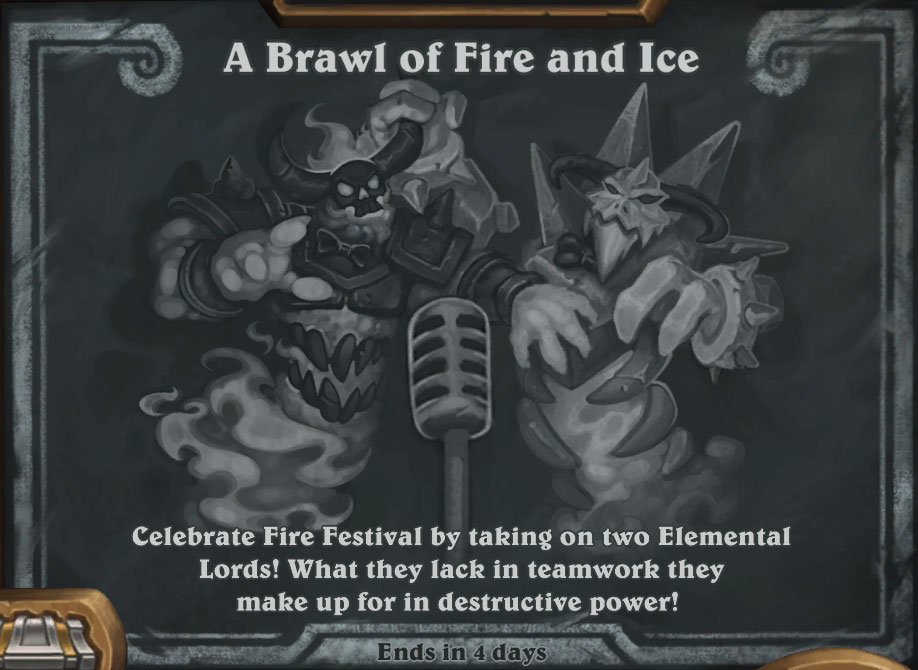 Let’s start with “A Brawl of Fire and Ice.” The PVE brawl against Rag & Ahune. Took a lot of work (timing the VO, balancing, etc) and I’m happy with the level of challenge and the flavor of it. Getting the transitions to work and feel just right took most of the effort. – Source 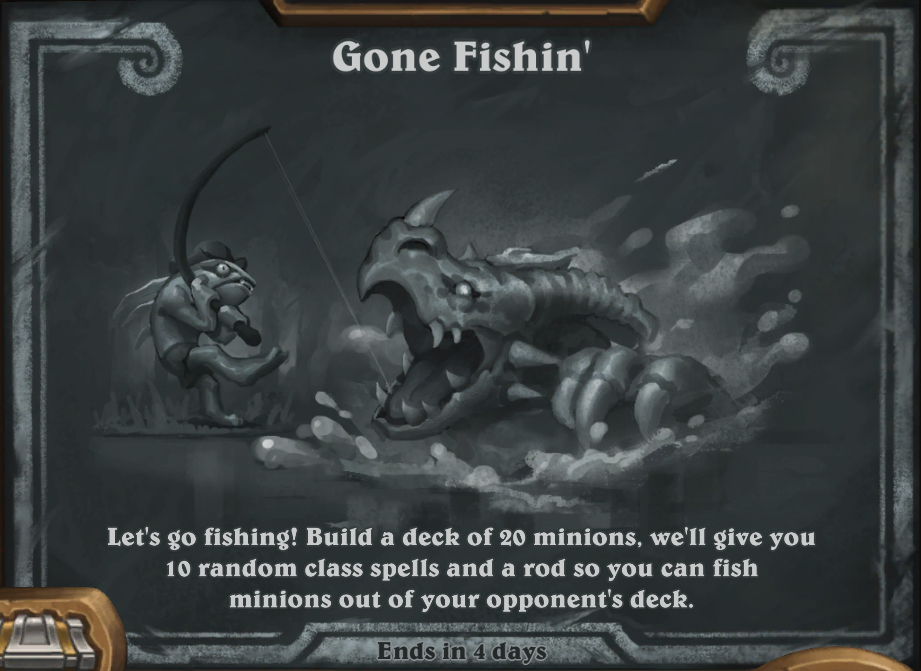 “Gone Fishin'” where minions from your deck get fished out onto your opponents battlefield. This year I really liked playing around with limits to deck building, making you build in weird unexpected ways. The “Tad’s Pole” mechanic from Dungeon Run played so well into this idea. – Source 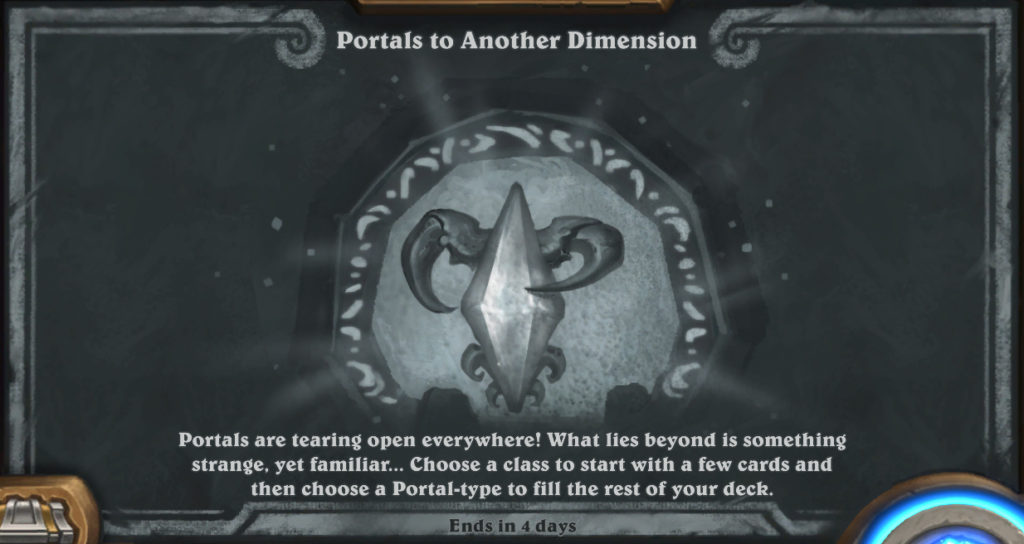 Portals to Another Dimension. Effectively “The Starcraft Brawl” choose terran/protoss/zerg and you get an unstable portal-like card that has a unique subset. Was interesting, I expected there to be more discussion about class/race combos, focus was more on which portal was best. – Source

Another thought on “Another Dimension”. When creating the pools for the portals I mostly focused on flavor, mechs go into the terran portal, goopy monsters into zerg. That didn’t really account for balance and I think it could have been improved with more diverse cards. – Source 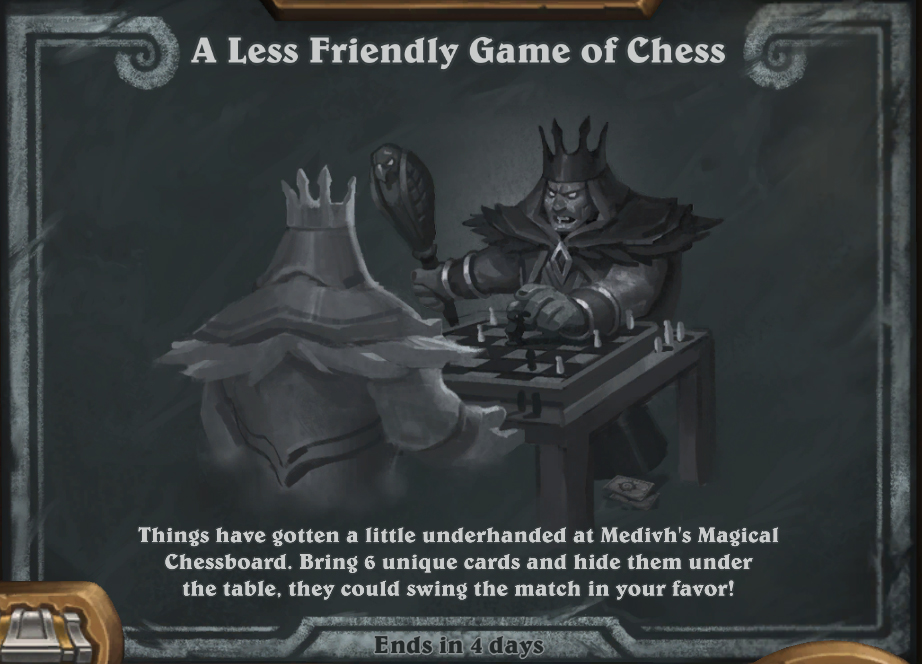 “A Less Friendly Game of Chess”, Chess Brawl but you bring 6 unique cards. I would always affectionately call it “Cheater Chess”. Tiny decks are always fun and lead to great experimentation. I always loved the idea of hiding cards under the table. Lotta interesting matchups. – Source 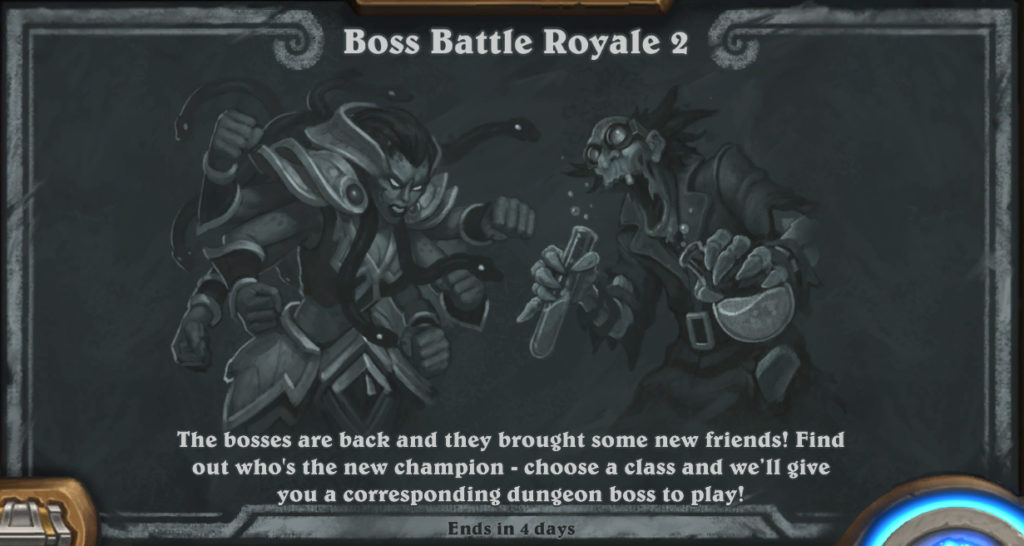 “Boss Battle Royale 2” Play as the Bosses with some new additions! Sindragosa, Putricide, and Togwaggle! Sindragosa was way too strong the first time out, had her full kit. Great part of how we re-run brawls I was able to nerf her. I was surprised how balanced Togwaggle was. – Source 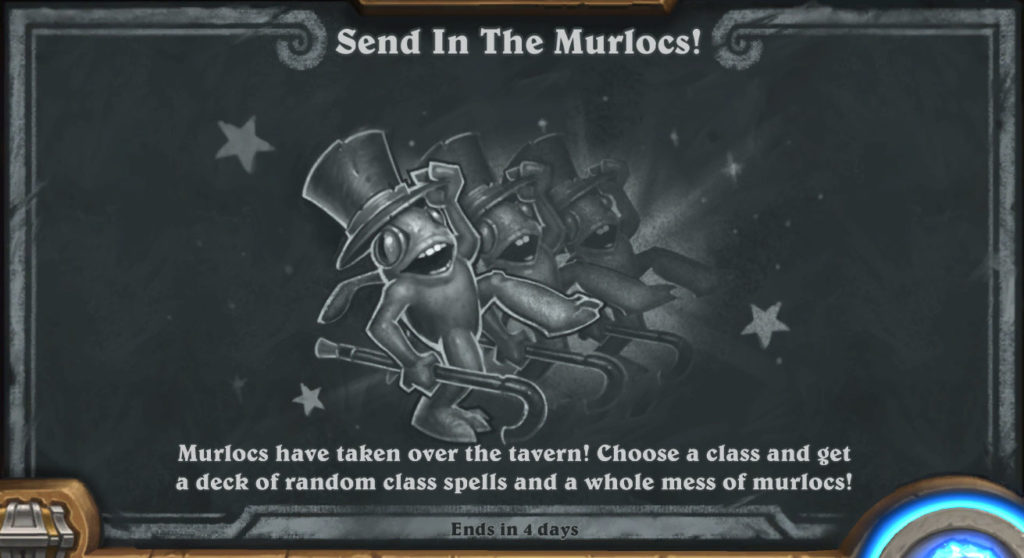 “Send In The Murlocs!” Random Deck of Murlocs! I didn’t realize it initially but this is a Brawl that the team had wanted for a while. Just took a few years to get a “pool” wide enough for it to be interesting. Although it could often come down to who draws Ol’ Murk Eye. – Source

I could always remove that card from the possible options although it’s such a juicy moment when it happens. Sorta thing I have to consider often with these brawls and also the sorta thing that doesn’t surface until it gets into player’s hands. Will continue considering, always. – Source 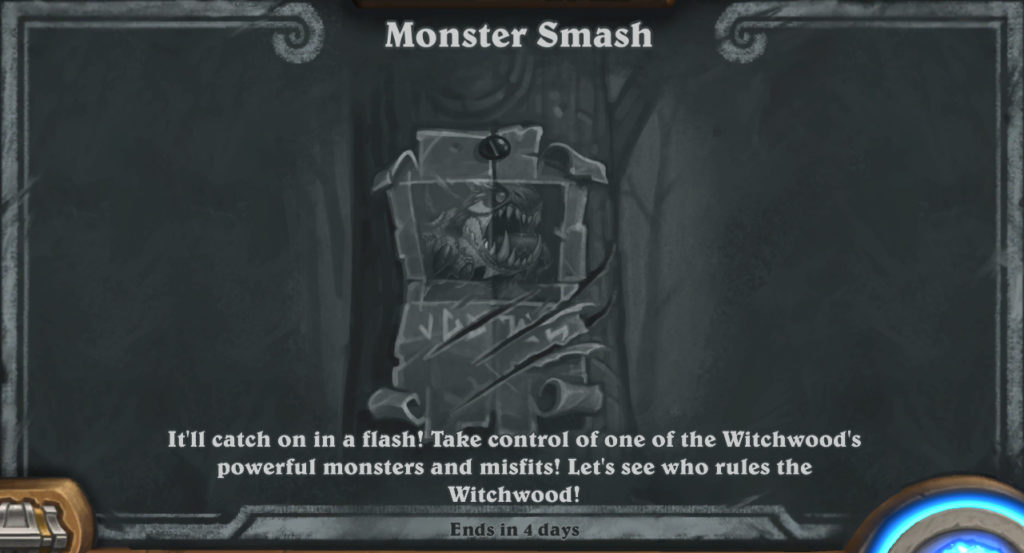 “Monster Smash” play as a random Witchwood boss! Started life as a Boss Battle-like, worked better as a random boss. I knew early that the power levels could be pretty far apart. Although I wonder if you lose some of the excitement of trying all the bosses when its random. – Source

Overall I’m happy with how it came out, players still had fun and had stories. Again, just another consideration that often goes into these. – Source 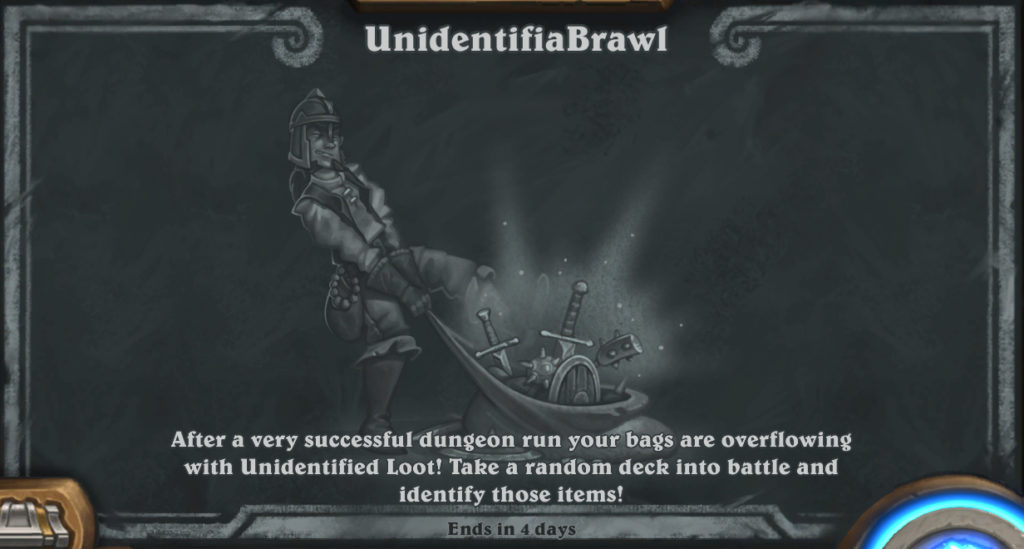 “UnidentifiaBrawl” your deck is full of Unidentified items! Learned some lessons with this one. I focused on the “unidentified” mechanic while K&C was still in development. It never really took off (maul excepted) and so the Brawl felt weird, somewhat orphaned. – Source

Really the big takeaway is if you’re doing a brawl like this take a moment to see what players respond to and then build from that. Or try and build something unique that has one of these new mechanics as a part of the flavor rather than the focus. Zombeasts is a great example. – Source 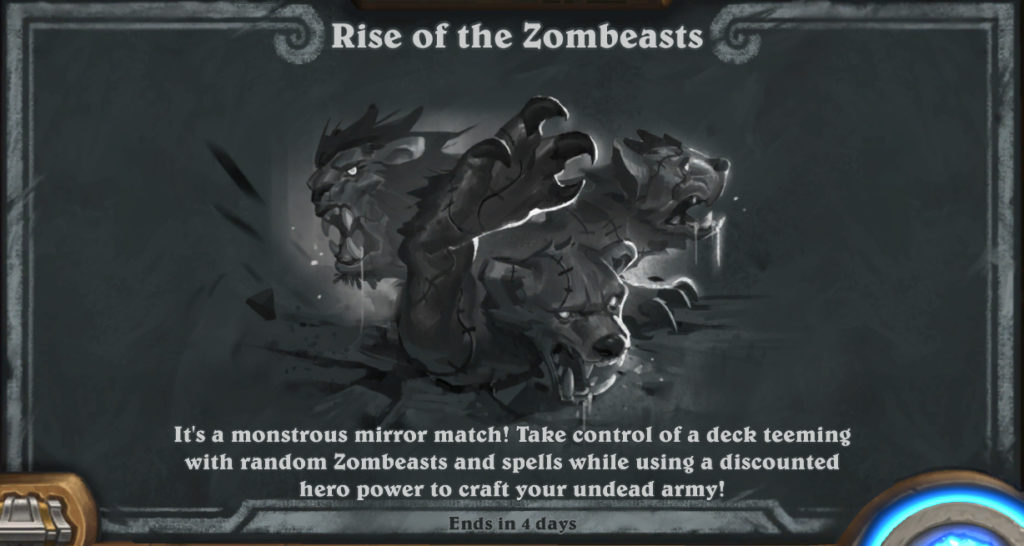 That said! “Rise of the Zombeasts” DK Rexxar mirror match! Started simple, snowflippers and free hero power, wasn’t fun. It had to be massaged over a few months to get to where its at. Happy with the result although the games did have a tendency to be long. Mirrors are like that – Source

While we’re here. I often just make brawls, when I’m in between projects or deadlines I just tinker and implement and backlog. In that state they are almost never fun but are usually an interesting extrapolation of a mechanic. Zombeasts was one of them, took it out of the backlog – Source

We playtest, iterate, experiment, iterate again. Sometimes it goes right back into the backlog for another time. Sometimes it just feels too good to not ship. Those are magic, those are my favorite. – Source 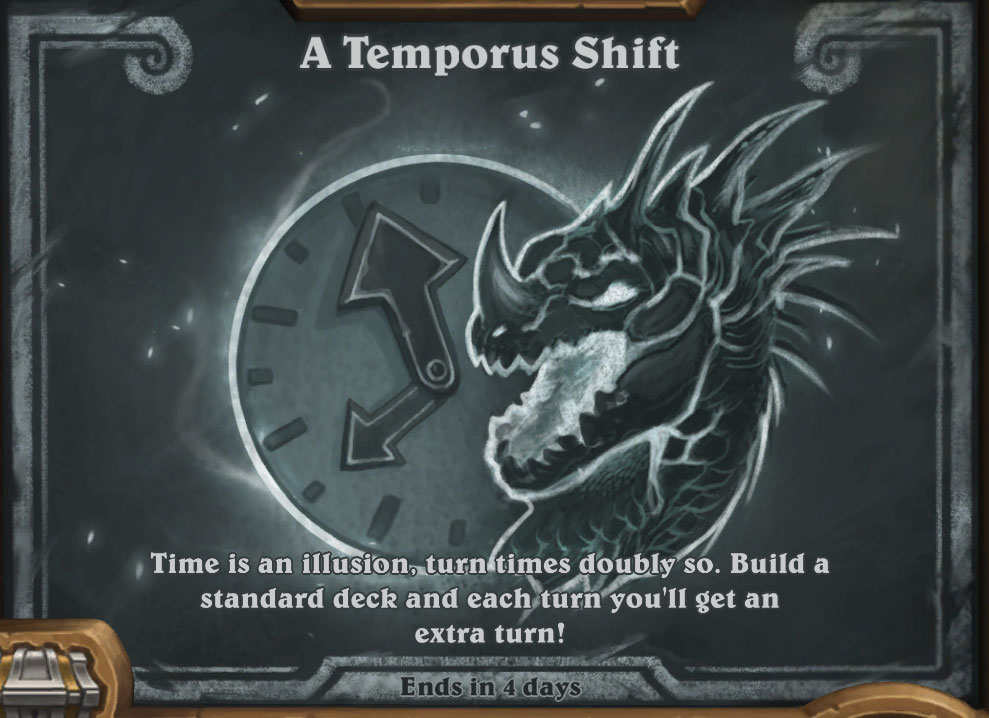 “A Temporus Shift” probably fits that. Every turn is two turns. I LOVE a brawl that’s just a simple rule change. It plays into that fantasy of having “house rules” at the tavern. That said, first turn had an advantage and it’s something I’m going to consider if/when this returns – Source 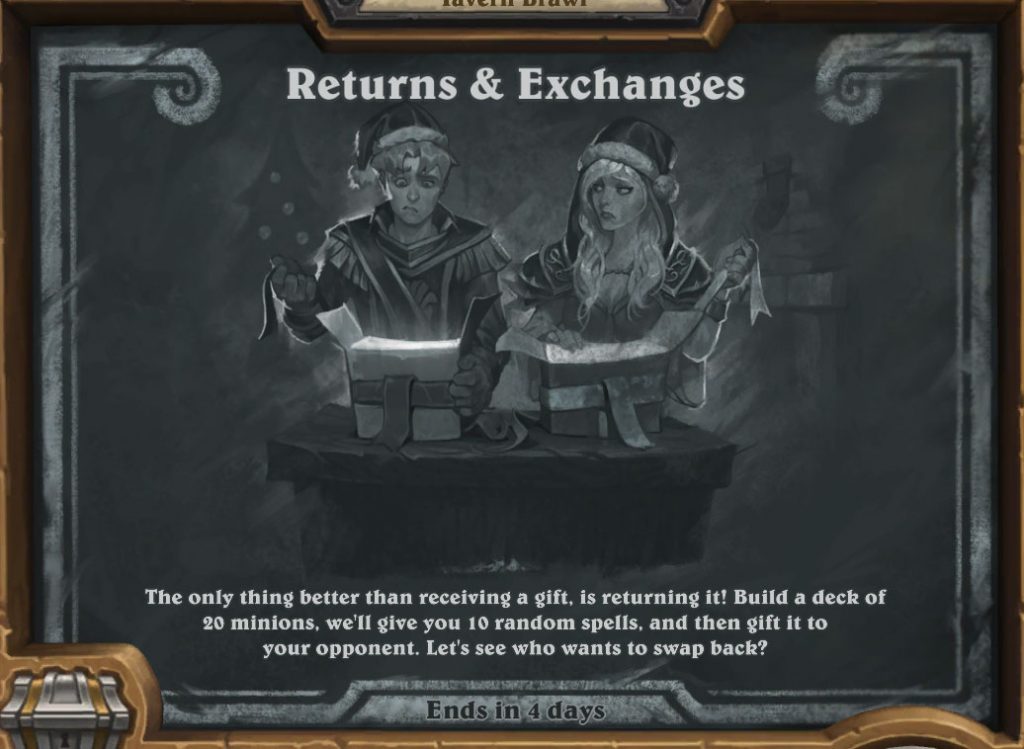 “Returns & Exchanges” build a deck, “gift” it to your opponent, but you get a gift receipt if you want to return it. The flavor on this brawl is weird but man if it ain’t the most joemag brawl ever heheh. The receipt mechanic was baked into its DNA and I’m happy I stuck by it. – Source

It might not have been the most direct version of a holiday brawl but I thought it was something I’ve never seen done or lampooned in a game before. I also love the chalkboard, I often write the pitches for our epic artists, for this I wrote “their expression says ‘ugh, socks?’.” – Source 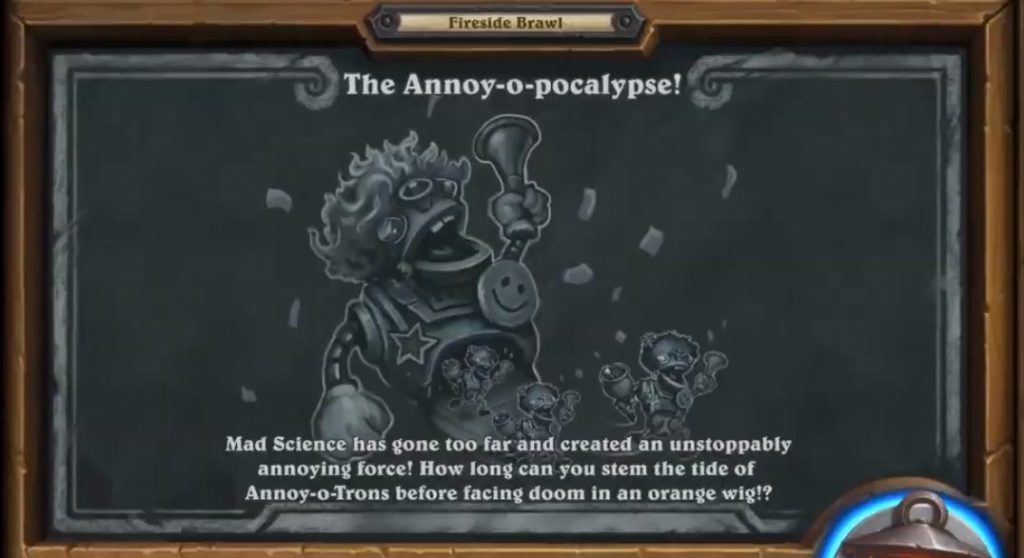 “The Annoy-o-pocalypse” one of our exclusive Fireside Brawls. Fight an unstoppable army of Annoy-o-Trons!!! So I also make a lot of our Fireside Brawls that you can only play at Fireside Gatherings (firesidegatherings.com ). They offer a very different experience! – Source

Annoy-o-pocalypse (still love that name) was at Gamescom this last year, like the Lich King Raid the year before. We wanted to do something like LK Raid but more manageable, less fussy, easier to run. Still wanted some sort of high score since that was the main attraction. – Source

I also always wanted to do a “horde mode” sort of brawl. So what’s small, challenging, and would be fun to destroy hundreds of? Annoy-o-trons of course! So there’s a high score to how many you can destroy and how much damage you do to the main boss (who’s basically stormwind). – Source

I really love making stuff for FSGs, the energy there is so unique and I get to experiment and try even weirder things. I highly recommend checking them out, if you can’t or none are near you can always setup private gatherings to try out the content at home with some friends. – Source

I think that about wraps it up. Thanks for playing the brawls this year! I never forget how lucky I am to design in this space, I have such a great opportunity to try things, learn and make better and better brawls. 2018 I feel like I refined my craft and I look forward to 2019! – Source