The top level of competitive Hearthstone, Grandmasters league, will begin its second season on Friday, August 23rd. 48 Hearthstone players across three regions will play for glory and prizes over the next two months. This time, the stakes are more real, because in addition to the upside to winning, there is also a downside to losing: the bottom two players from each region risk relegation and being replaced by the top performers from Master’s Tour events.

While the first season attracted some interest with all the household names competing on weekly basis in a meta with more mid-expansion changes than any previous Hearthstone expansion, the competition struggled to maintain its viewership numbers. The lack of consequences for losing was one factor and the new competitive format, Specialist, was another. Therefore, Blizzard is now introducing a new-new competitive format for season two. In this article, we take a look at what happened with Specialist and what the new format can do to help Hearthstone esports.

The Rise and Fall of Specialist Format 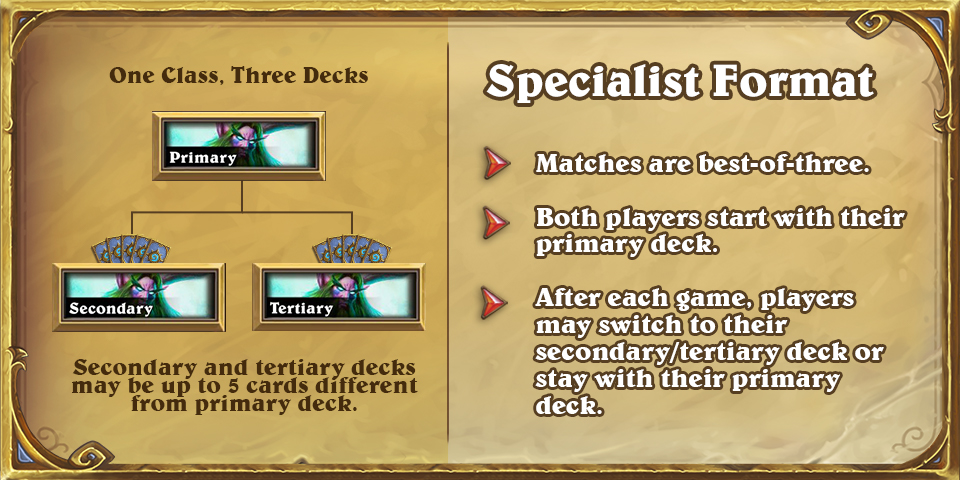 The main competitive formats for Hearthstone before 2019 were Conquest and Last Hero Standing. Both are multi-deck formats that are most commonly played in a best-of-five format with one ban. This means that both players bring four different decks, one of which is then banned from a match, and it will take up to five games to decide the winner of a match.

For 2019, Blizzard was looking to streamline Hearthstone esports: faster, simpler, easier. In order to achieve these goals, they came up with the Specialist format, which is a single-deck format with limited sideboarding: players bring three decks of the same class, and their secondary and tertiary decks can differ from their main deck by up to five cards. Matches were primarily played in a best-of-three format, thereby reducing the time it takes to complete a match.

The fantasy was that a player who focused exclusively on, say, Priest, could take that Priest ladder deck to a tournament and succeed because of their specialist ability without having to learn other classes or invest in cards for multiple decks. Of course, things did not turn out that way at all. What we got instead was a small number of dominant classes comprising the majority of played decks, and a new meta built around the limited sideboarding options, in which the decks were not really ladder decks either. While viewers got to see the strongest classes a lot – unlike in ban formats, where overpowered decks are simply banned away and not played – they also lost class diversity and got to see the same matchups over and over again.

Warrior mirror became a common topic on Twitch chat and Reddit, and interest waned with the same matchups being played time and again. It is not just a matter of pure numbers as much as how it feels to watch a Specialist tournament: you can get deeper into an individual matchup, but you will mostly see meta matchups, and you will see the same ones again and again.

Looking at the numbers, here are the times various classes were brought to Grandmasters during season one:

The top three choices were clear, and even the third-most popular class, Mage, was brought more often than the bottom six classes combined. Priest, for example, did not win a single game during Grandmasters season one.

Even with a three-class rock-paper-scissors meta, there were not that many actual mirror matches. Of the 813 games played during season one, 178 (22%) were mirrors. In case you were wondering, 80 of them were Bomb Warrior mirrors, and there were 37 Cyclone Mage mirrors and 50 Tempo Rogue mirrors. However, Bomb Warrior also faced Cyclone Mage 100 times and some variant of Tempo Rogue 107 times, while Cyclone Mages and Tempo Rogues met each other 101 times. That’s 475 games (58%) of the season spent in games between just three decks.

The New-New Format: Best-Of-Three Conquest with a Ban and a Shield Phase

In an attempt to remedy the situation, Blizzard is introducing a new format for Grandmasters season two. It is a best-of-three variant of Conquest format with a ban and a new Shield phase.

Because of the Shield phase, Hearthstone esports will showcase the best decks in the game and be closer to the ladder experience in that regard, while still returning to a multi-deck format. We have had times in the past where 100% of the field have brought an overpowered deck (Jade Druid, for example), only for it to be almost universally banned and not actually played during the tournament. This protected competition from an overpowered deck, but also kept it distinct from ladder, because tournament decks could simply ignore the existence of a powerful deck and make card choices that would not be viable on ladder. Specialist, on the other hand, was utterly dominated by a couple of powerful decks. The new format attempts to strike a balance between these two extremes.

A Conquest format where you do not have to win with all of your decks is actually a big deal. One way to build a Conquest lineup was to design it so that a popular deck cannot get any wins against your lineup. This option is now unavailable, because one of the decks does not have to be played. This drives lineup decisions towards cookie-cutter builds of all-around strong decks. However, it also has the opposite effect of allowing an experimental deck in a lineup, because you do not have to win with it. However, bringing an experimental deck means that you will miss one generally strong deck, so you need a lot of faith in that build to justify reducing your flexibility.

Then there is of course the matter of matches being in a best-of-three format. Best-of-five used to be considered the minimum number of games to sort out the best players in Hearthstone, because of the inherent randomness built into any card game. What has changed? The main drive behind best-of-three seems to be scheduling and time constraints, and not competitive considerations. In Grandmasters, players play a lot of matches over the season, and that mitigates the effects of best-of-three matches, so it might all work out in the end.

The meta will ultimately determine what kinds of lineups we will see in this new format. If it’s a rock-paper-scissors between three classes, everyone brings those three classes and one deck that can hopefully target some of them, protects one of the top decks, gets one of the top decks banned, and probably plays the other two top decks in a match. In a best-of-five format, one weaker deck would also see play, but in a best-of-three that is unnecessary. One of the criticisms of best-of-five Conquest used to be that it is your weakest deck that is the most important one, and the players with the strongest fourth decks succeeded. In the new best-of-three, we may end up with the same top meta face-off as we did in Specialist, but at least we do not have to watch the exact same matchup three times in a row.

Overall, I am cautiously optimistic about the new format. A single-deck format is a poor fit to Hearthstone, where there are nine separate classes that cannot be combined freely – compared to the colors in Magic, for example, that can be used in any deck in any imaginable combination. Class diversity makes tournaments more exciting, and a multi-class format goes some way towards promoting it. However, a best-of-three format is a short one for multi-class matches: this new format is the best hope so far to make it work, but it is far from certain whether it will succeed.

Oh, and if you’re not into Grandmasters, all other official competitions will still use the Specialist format for now. This includes Master’s Tour qualifiers and the upcoming Master’s Tour Seoul, so you need to wait just a little while longer to see the new format in action.