BlizzCon is over, and now we are finally in the know about the last expansion of 2019: Descent of Dragons will be the third set in the Year of the Dragon.

In the first time in Hearthstone history, Team 5 actually took their Standard year name quite literally, as dragons look to take the main stage in Descent of Dragons. In fact, it is Galakrond, the “Father of Dragons”, who will try to influence the outcome of the year-long fight between the League of E.V.I.L and the League of Explorers.

But who exactly is Galakrond? What could be the reasons behind his interference in Hearthstone great finale?

Let’s start with what we have been presented so far: In a teaser video one week prior to BlizzCon, Madam Lazul and her crystal ball showed us the Dragonblight, a zone in the south of Northrend. This snowy valley contains tons of lore about dragons as well as their skeletons, as numerous of Azeroth’s most mystical creatures came to die in Dragonblight. 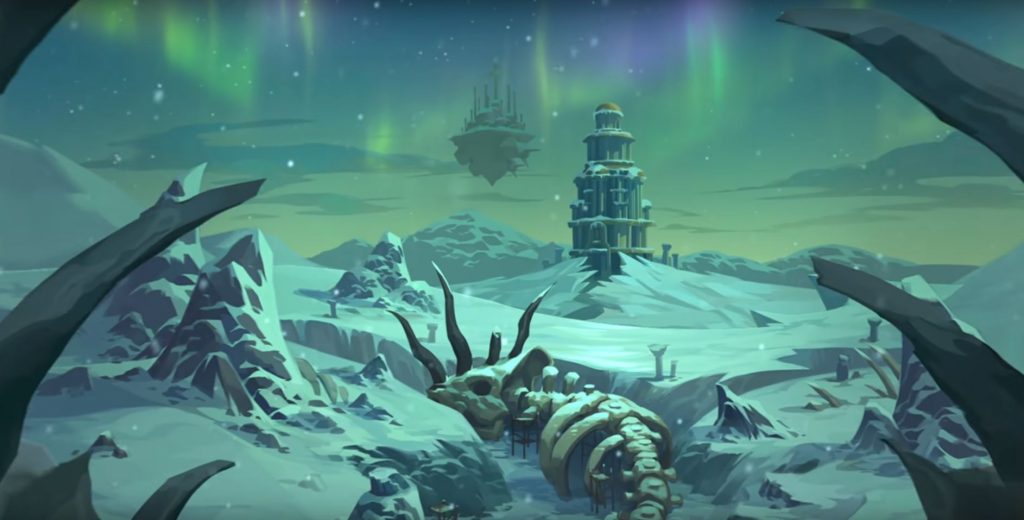 The crystal-clear vision of Lazul not only shows Dalaran in the background, back in its “usual” place right over Crystalsong Forest; we also see Wyrmrest Temple, one of the most lore-packed buildings in the Warcraft universe.

The focus of the vision is topped by an enormous dragon skeleton, and we know that this skeleton once belong to Galakrond, or as he is called in common lore, the Father of Dragons.

As already said, Dragonblight belongs to Northrend, the continent that WoW players entered with the release of Wrath of the Lich King. And Galakrond’s Rest – as the point of interest is called in-game – plays a vital role in the main quest storyline of Dragonblight.

In fact, it is the Lich King himself who wanted to resurrect the mighty Galakrond to fight alongside the Scourge. But thanks to the mighty adventurers of Azeroth, Grand Necrolord Antiok – who was in charge of raising Galakrond from the dead – could be stopped in his sinister plans. Now we know that in recent World of Warcraft lore, Galakrond is, in fact, dead, just like Lazul’s initial vision showed us.

Fast forward to BlizzCon 2019: Descent of Dragons has been announced, and what do we see? Galakrond is alive!

Well, not exactly. The new keyword called Invoke looks to tell the story around the League of E.V.I.L. who tries to accomplish what the Lich King failed to do in World of Warcraft lore: Reviving Galakrond to fight on their side against the League of Explorers.

Galakrond and the History of Dragons

And we are not talking about a random dragon, folks. We are talking about a creature who is called the “Father of Dragons” – and one of the most evil beings in Warcraft’s history.

To fully understand what role Galakrond played in the history of Azeroth and dragons in particular, we need to go back over ten thousand years in time:

Back when no humans existed, the proto-dragons, the primal predeccesors of today’s dragons, resided all over Azeroth. Simple in intellect and sense, they gathered in different dragonflights. The leaders of those dragonflights, however, showed extended understanding of the world.

During those times, Galakrond already had been one of the most powerful and massive proto-dragons. Nobody really knows why and how he gained these powers, but rumors say that the titan keeper Tyr was involved in Galakrond’s growth.

Over time, he became more and more massive and hungry, which eventually caused him to hunt down his own kin. The immense amounts of cannibalism corrupted Galakrond through and through, and not only that: The proto-dragons that he consumed returned to live as the so-called “not-living” who fought by his side.

As Galakrond noticeably decimated the population of proto-dragons all over the world, the dragonflights decided to unite against him. In the first battle, the proto-dragons weren’t able to defeat Galakrond, but luckily the leaders of the dragonflights – Alexstrasza, Neltharion, Ysera, Malygos and Nozdormu, who were later known as the Dragon Aspects – survived.

Most likely driven by feelings of guilt, Tyr decided to intervene and help the proto-dragons. Using the strengths of every single dragonflight leader – Alexstrasza’s connection to life, Malygos’ magical affinity, Neltharion’s power of the earth, Nozdormu’s excellent timing, and Ysera’s ability to dream the impossible – they managed to defeat the mighty Galakrond.

After their victory against Galakrond, the dragonflight leaders were asked by the titans themselves to take their future roles as the Dragon Aspects – a group of the most knowledgeable and wise dragons that should guard over the world. Since then, the history of the Aspects since their initial fight against Galakrond shaped the lore of World of Warcraft

Now back to Descent of Dragons: Luckily enough, the Dragon Aspects seem to hear the call of the League of Explorers who try to prevent the invocation of Galakrond.

Picking Galakrond as the main antagonist not only for the last expansion of 2019 but for the great finale of Hearthstone’s first year-long storyline shows the importance behind this lore decision – and Team 5 nailed it.

The icing on the lore cake is the active use of key gameplay elements as a way to support their very own storytelling with Descent of Dragons.

That combined with the comeback in the form of Dragon Aspects reprints and the announcement that we “will see more dragon cards than ever before” ends an exciting premiere of Hearthstone’s first year-long story arc.

We expected Deathwing and got Galakrond, a villain that could not be more vile and corrupted in his evilness. Rafaam chose wisely once again, and we can only hope that the League of Explorers with the help of the Dragon Aspects will be able to play the right cards in a final fight – because otherwise the Year of the Dragon will be the last story told in Hearthstone!