Hearthstone’s ladder system was revamped in April 2020 when the old 25-rank ladder was retired in favor of a new 50-rank ladder. The change went far deeper than just the number of ranks and stars as it also touched the monthly ladder grind, season rewards, and matchmaking. We have now played two full months in the new system and it is a good time to take a look at how successful it has been: Is it more even? Is it more competitive? Is it more rewarding? Is it more fun?

Is It More Even? (Bronze Is Not the Same as Bronze Anymore)

This means that for good players who only play a few games, competition does not get weaker as you near the end of the month as it did under the old system: if you play less than people of your skill on average, you used to fall behind them in the climb and faced weaker players before the next reset. In the new system, you will constantly face worthy opponents, so your winrate is closer to 50% but the games should be of higher quality. A player in Bronze who starts playing late in the month can play all of their games against Legend players if they are rated high enough. 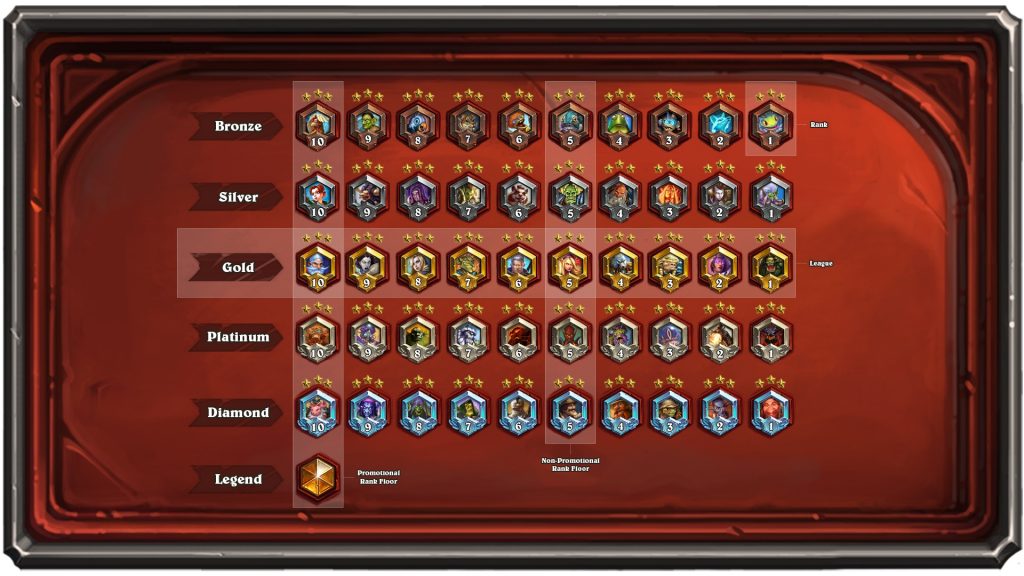 For the most part, the new system does a better job than the old system in finding worthy opponents. As a curious side effect, when I climb later in the month on other servers, the quality of games collapses when I hit Diamond 5 and drop out of star bonus, only to jump back up when I reach Legend. There is a curious area where you play without star bonus and can face anything from top players climbing alternate servers to casuals just chilling at a rank floor.

Chilling at a rank floor is far from being as chill as it used to be though. Because your MMR is not reset, you can lose a lot of it when experimenting or playing meme decks and then face a long and hard grind to get your MMR back up if you want to play seriously again. A new season cannot save you anymore.

What makes it all more confusing is that you cannot see your MMR anywhere. The closest you get is seeing your Legend rank, if you’re in Legend, because Legend ranks are just people sorted by their MMR. What you cannot see is how big of a difference there is. Is the #1 spot ten wins from where you are, or is it 100 wins away? There is no way to tell.

The system is far better at matching players evenly than the old system under the assumption that all players are always trying seriously to win. The moment you deviate from this designed path and start to explore new archetypes, for example, the system still treats you as if you were playing your best deck with your best effort, so if you start losing you have obviously lost your skills. The simplified view the system has of the game sadly punishes some of the most interesting aspects of playing a card game: building and testing new decks.

Is It More Competitive? (How Hard Is It to Get to Legend, and Does It Matter?)

It can be difficult to separate the effects of the Standard rotation and new expansion from the ladder rework, but overall there are more players in Legend than ever. A community effort to track the number of Legend players in various regions has come up with these approximate numbers at the end of the month:

Roughly nine times as many players reached Legend in the first month of the new ranked system than in the last month of the old ranked system. In the second month, there were still around six times as many Legend players under the new system than in the final month of the old system. So while the first month can partially be attributed to the new expansion, the numbers staying high in the second month seems to indicate that the new system results in more Legend players.

However, for a mid-Legend player from the old system, the difference is not big, and any difference that does exist goes the other way: it actually takes more games to reach Legend from Bronze 10 with a 10x star bonus than it did to reach Legend from Rank 4 in the old system. It takes more games, but you don’t have to have as high of a win rate: even a 50% win rate takes a 10x star bonus player comfortably to Diamond 5, from which all you need to do is to win 15 games more than you lose, the equivalent of climbing from Rank 5 to Rank 2 in the old system. With a smaller obstacle to climb at the end, more people are able to pass the gate and become Legends.

Legend is not an exclusive club in the new system, although, given the size of the player base, even tens of thousands of Legend players remain a small portion of the whole.

What is new is that once in Legend, there is a whole new grind in front of you. With MMR values not getting reset, the top ranks slowly creep up, and it becomes a bigger grind to climb to the top once you are in Legend. I actually lost thousands of ranks by testing new decks for around 200 games, going from around 1000 to 6000. I had to have a terrible win rate to do that, right? Well, I suppose. It was 52%. You need to keep winning at a good rate in Legend or people will pass you by. Consider Sidisi’s climb in Legend this season: 91-47 (66% win rate) to climb from 3290 to 1090. To reach the higher ranks, the grind has simply moved to take place within Legend, where you cannot even clearly see the progress you make because your MMR is hidden. In contrast, players with high MMR need to play less than ever. For example, Meati was able to get a #2 finish in May with a 124-87 (59%) record for the entire season after grinding hard in April with almost 1000 games for a #13 finish.

There is also the elusive 11x star bonus to compete for when you are in Legend. With 11x star bonus, you will receive bonus stars for winning all the way to Legend, which means that you will reach Legend in roughly a hundred games even if you lose more than you win. We asked Game Director Ben Lee for more details on how to achieve this reward, and he told us that it is based on MMR (not fixed ranked) and it is tweaked to include roughly the top 10% of Legend players. Unfortunately, there is currently no way to know if you’re eligible for the 11x star bonus until after the season is over, but maybe this piece of information can help you to make a rough estimate if that is your goal.

Overall, then, getting Legend is now easier than before, although it still remains a major achievement. However, getting high ranks in Legend is a bigger grind than before unless you already have good MMR, in which case you can play less as long as you can maintain a good win rate.

Is It More Rewarding? (Packs or Golden Cards?) 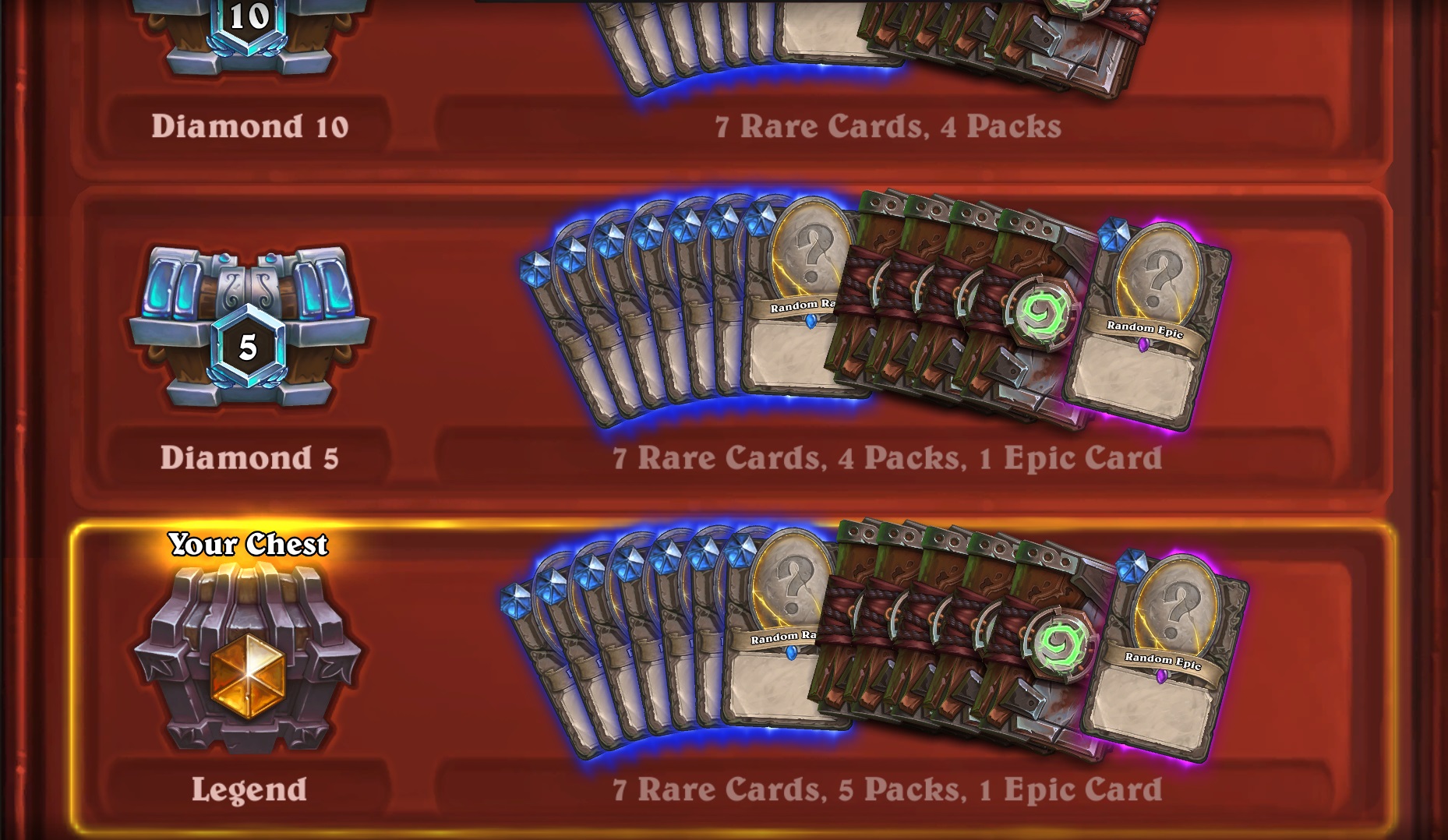 The new system also gives you rewards when you reach specific ranks for the very first time, which adds another incentive to make that push towards Legend at least once.

The old system was better if you want golden cards and you intend to keep them. Other than that, the new system is more rewarding.

Is It More Fun? (Why Are We Playing?)

You are more evenly matched most of the time in the new system and you also get somewhat more cards as rewards for playing, both of which can be good things.

On the other hand, the new ranks can be confusing now that matchmaking has been separated from your rank. Much of the progress you make each month is an illusion, designed to keep you playing the game. Star bonus will slowly carry you to almost where you were, from which real progress can begin. Do you mind that you are being “tricked” to play the game? So far, people have been happy to keep playing, so the new system seems to be more fun than the old one. Time will tell whether it lasts.

What is your experience with the new ladder system? Have you been happy with it? Let me know in the comments!