It’s been a long while since Blizzard has shared their data about Ranked Players distribution. In fact, last time we’ve seen any official data like that was over 5 years ago, in 2014. The game was still fresh back then, and the current ranking system has only been out for a few months. You can find the old chart here. 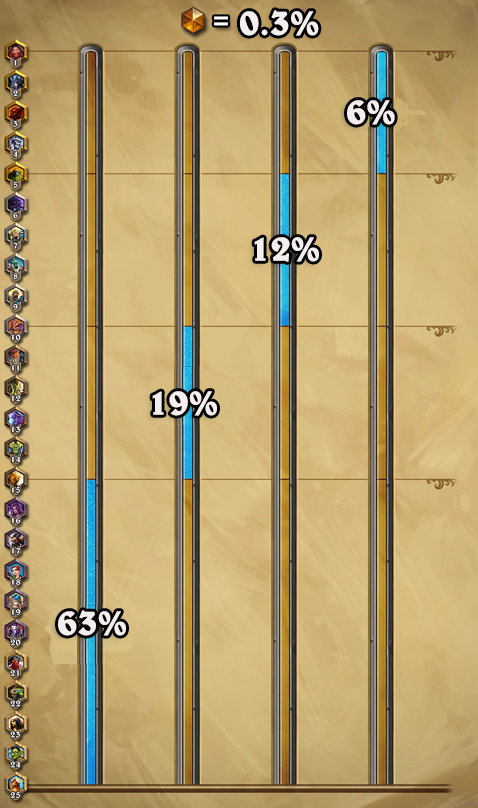 The chart was done for November 2019, which honestly might make it a bit skewed near the top (since we were in the middle of Evolve Shamanstone meta and lots of players didn’t feel like climbing to Legend), but the general idea should remain the same. The data only counted players who have played at least one game, so it did not include inactive accounts. The chart also does not count players still in the “novice” ranks (R50-R26).

If we compare it to the 2014 chart, number of players in Legend is roughly similar – 0.5% vs 0.3% is not a big difference. In fact, given the thing I’ve said above (many players didn’t feel like grinding Legend because of poor meta), I would imagine that they could be very similar on a different month. Either way, Legend is still a pretty “exclusive club” and only a very small percentage of the playerbase hits it every month. A big difference, however, is the amount of people between R5 and R1. It used to be only 2% back in 2014, while it’s 6% right now. 3 times increase is very significant, but there are some easy explanations. First of all, 2014 chart was done before end of month ranked chests were introduced, so players didn’t have that much motivation to hit R5 (which offers a Golden Epic). More recent ranked changes also had something to do with it – not only rank floors were introduced every 5 ranks (which made climbing easier + players couldn’t fall out of R5 after hitting it), but players are no longer set back to low ranks after monthly reset.

Constantly watching pro streamers and being fed with high Legend decks makes some players think that only bad players belong in lower ranks, which is not necessarily true. For example, hitting R10 already puts you in ~Top 20% of players. R5 is ~Top 6%. And if you hit Legend, you’re among less than 0.5% of the players who did it that month. So congratulations, no matter how high you’ve climbed 🙂