Elementals are the most recent addition to Hearthstone Battlegrounds, as all the minions in the tribe were added to the game in patch 18.4 in late September.

Elementals can grow to be freakishly huge and their main win condition is pure stats. You can simply overwhelm your opponent with gigantic minions that crush any opposing force to goo. Except for Poisonous minions. The main weakness of Elementals is poison because they are strictly a stat-based tribe. It is no coincidence that Deadly Spore was released at the same time with Elementals to help counter their size with some carefully injected poison. If you can avoid poison, you are good to go. 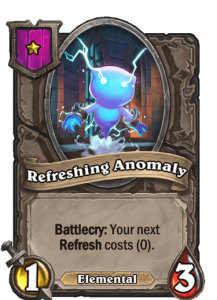 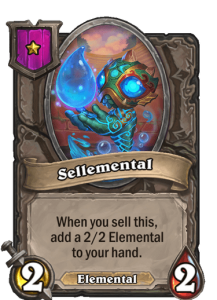 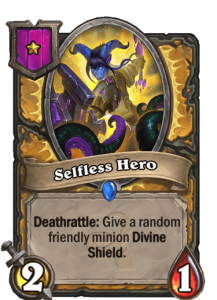 Sellemental is one of the best Tier one minions. You really want a token on turn one to get a good start for your game, and Sellemental provides you with two minions, just not at the same time. It is right behind Murloc Tidehunter in performance and may even be better than Alleycat. Because late-game Elemental strategies are focused on playing and selling Elementals, Sellemental also has great tribal synergy throughout the game.

Selfless Hero is not an Elemental, but she is worth mentioning in conjunction with the tribe. One of the main weaknesses of Elementals are Poisonous minions, and Selfless Hero’s ability to give your other minions Divine Shield can be useful with some Elemental compositions. 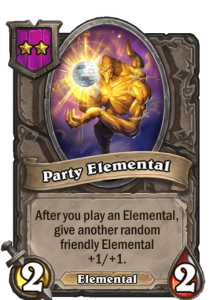 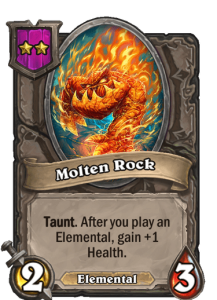 Party Elemental is a useful early-game Elemental buff minion. Its low stat line means that you rarely want to pick it up without other Elementals to go with it, but if you are offered multiple Elementals, it can form a key part of your early- and mid-game composition.

Molten Rock is a growing early-game Taunt minion. It relies on other Elementals to be useful, so it is not something you would pick alone early in the game, but if you have a chance to combine it with other Elementals, especially Party Elemental, it can offer a strong defensive minion. 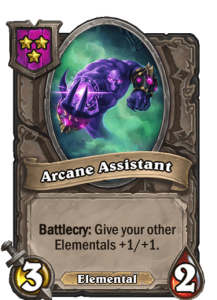 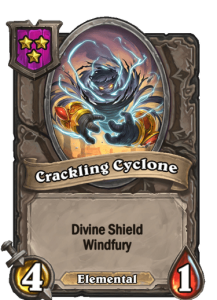 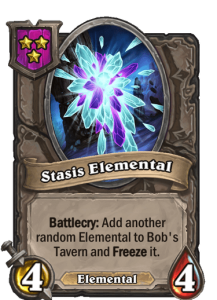 Arcane Assistant is an Elemental buff minion. It is only useful if you already have multiple Elementals, in which case it can really help your board. As an upside, it is also an Elemental itself – unlike Crystalweaver for Demons, for example – so it also helps with all the other synergies that require you to play Elementals on the board.

Crackling Cyclone is one of the strongest Elementals. Because Elementals are usually buffed while in the Tavern, the Crackling Cyclone you buy early is not going to be the one that stays with you all the way, but it is a strong minion already early on and even better when it is buffed up in the late-game. 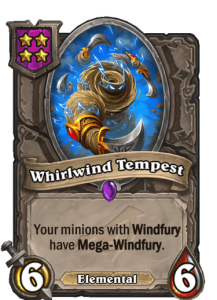 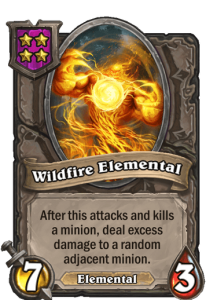 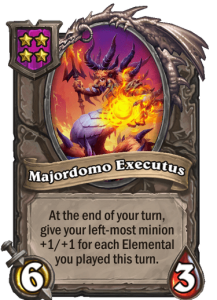 Whirlwind Tempest turns all of your Windfury minions into Mega-Windfury minions while it stays on the board. This can beef up your Crackling Cyclone, although it needs to be buffed up a lot to survive all those attacks, and it also has uses in other than pure Elemental compositions. For example, turning Al’Akir’s Windfury effect into Mega-Windfury can be devastating with the right minion.

Majordomo Executus provides your left-most Elemental a buff each turn depending on how many Elementals you have played. However, as Executus is not an Elemental himself and as the buff is rather minor, Executus is typically not worth buying. The real key buff minions are on Tier five, and Executus is more of a distraction. 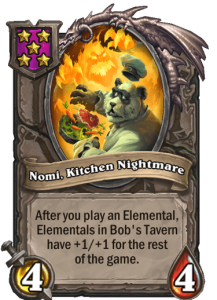 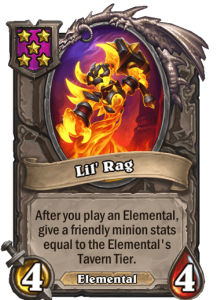 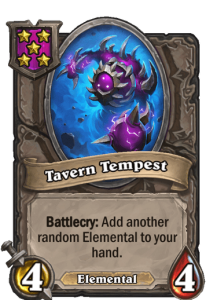 Nomi, Kitchen Nightmare is the heart of most Elemental compositions. It is the minion you’re looking for to commit to Elementals. Once you have Nomi, you want to buy every Elemental you can, as every time you play an Elemental, all Elementals in Bob’s Tavern – the ones you have not bought yet, current and future – get a +1/+1 buff. You then keep buying and selling Elementals to buy bigger and bigger Elementals. Buy the Elementals you want to keep on your board for that turn as late as possible to give them more buffs.

Lil’ Rag is another key piece to building a strong Elemental warband. With Lil’ Rag on the board, every Elemental you play gives a random minion a buff according to the Elemental’s Tavern tier. Lil’ Rag goes great with Nomi, and together they can quickly build ludicrous boards. Lil’ Rag can also be used alone, in which case you want to prioritize higher-tier Elementals to get meaningful buffs. A solo Lil’ Rag can also support menagerie compositions, as it can buff other minions than Elementals as well.

Tavern Tempest is two Elementals for the price of one. It does not do anything special on the board, so it is usually just a passing visitor, but it gives you more Elementals to play for your other Elemental synergies. 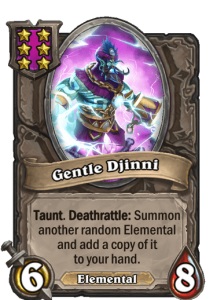 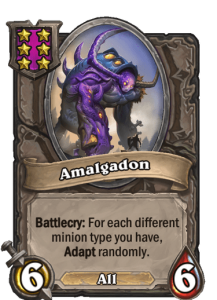 Gentle Djinni is a strange outlier when it comes to Elementals. It has a Deathrattle effect that summons a random Elemental, which is typically not that great because Elementals are built in the Tavern, not in combat, and they generally lack useful abilities. However, it also adds a copy of that Elemental to your hand. This can give you fuel to keep Nomi and Lil’ Rag going, so Gentle Djinni has its uses even though it is not a particularly common sight on Elemental boards.

Heroes With the Best Elementals Synergies

Any Hero can succeed with any tribe, and many of the most powerful Heroes can use almost all tribes with a high rate of success. However, some Heroes have a greater affinity to specific tribes, and Elementals are no exception. 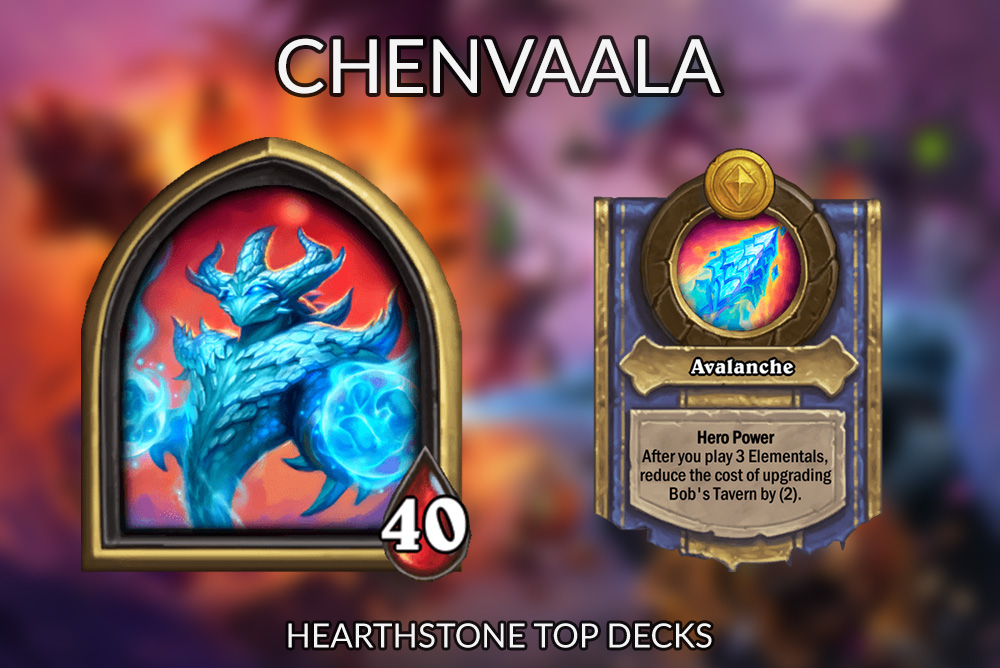 Chenvaala is the Elemental synergy Hero. The more Elementals you play, the faster you can upgrade your Tavern. Unfortunately, Chenvaala is a weak Hero who should never be picked, so it does not help much that you’d have a bit more of a chance with Elementals than with most other tribes. 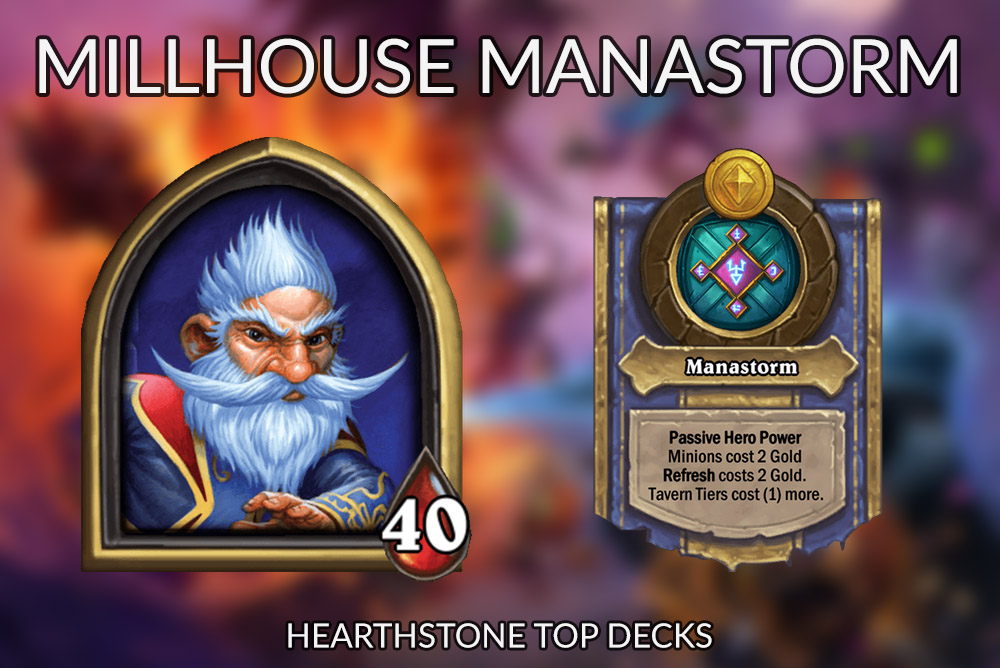 Millhouse Manastorm‘s ability to buy a lot of minions goes extremely well with the overall Elementals plan that relies on constantly playing and selling minions. Millhouse can also get Elementals rolling in the early game more effectively than most other Heroes. 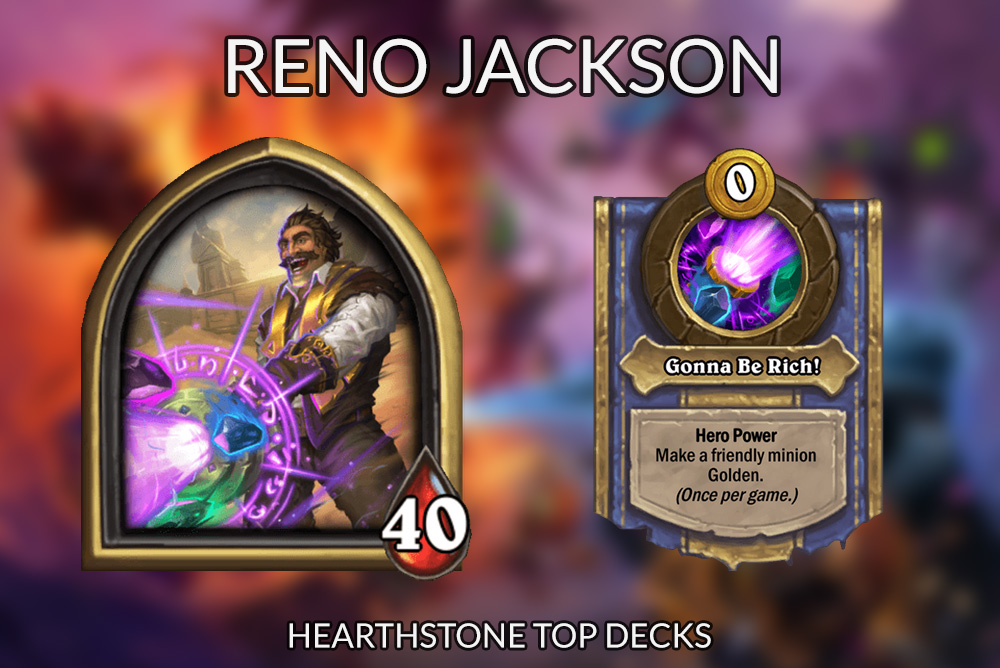 Reno Jackson is always looking for effect-based minions to turn into Golden versions of themselves, and both Nomi, Kitchen Nightmare, and Lil’ Rag are scary when subjected to Reno’s Hero Power.

Elementals are still new and therefore see more play than they should, and that means that Heroes that can get things from their opponents – especially Mr. Bigglesworth and Tess Greymane – perform better with Elementals during this initial hype period. This is a temporary phenomenon that will end as the tribe matures and becomes less interesting.

When and How to Use Elementals in the Early Game

Elementals are not a tribe that you commit to early in most games. Sure, Sellemental is a phenomenal tier-one minion, and you are likely to use it early in the game, but that does not mean that you plan to use Elementals for long.

There are some situations where you do go for Elementals early in the game, but even in those cases, you are still ready to pivot to something else unless you get the right tier-five minions. Early Elemental games are focused on Sellemental, Party Elemental, and Molten Rock, which can gain respectable stats from their buff effects.

An example of the early game for an Elemental player:

When and How to Use Elementals in the Mid-Game

The real commitment to Elementals comes when you get your first tier five minion: Nomi, Kitchen Nightmare is the centerpiece of most Elemental compositions, and it needs time to buff up the Elementals in Bob’s Tavern, so you usually need an early Nomi to succeed with the tribe. If you’re offered an early Nomi, you generally pivot to Elementals even if you currently have none on your board because all of your current board will be replaced by bigger and bigger Elementals in the coming turns anyway. With Nomi, you will buy every Elemental you see and start buffing the tribe up.

Alternatively, Lil’ Rag can be a reason to pivot to Elementals. Lil’ Rag is a bit more complicated though and it resembles Brann Bronzebeard in how it can also help you buff a menagerie board and not just a pure Elementals board. With Lil’ Rag, you want to buy higher-tier Elementals and your warband can include minions from other tribes as well.

Your mid-game Elemental board usually consists of your biggest Elementals that change often. Crackling Cyclone and Wildfire Elemental are your crack troops that head into the fray first, but the rest of the board can include various low-tier Elementals that just happened to be the most recent ones and have the most stats.

When and How to Use Elementals in the Late Game

Elementals scale well into the late game. A huge Cracling Cyclone can be game-ending by itself, especially if you manage to create a golden one. Lieutenant Garr can form an immovable object that only budges if your opponent finds Poisonous minions. Amalgadon can have huge stats in addition to Divine Shield and Taunt.

However, you usually do not pivot to Elementals in the late-game. Getting the Elementals stat buffs rolling takes time, and you do not have enough of it if you start late.

On the very last turns, you may want to sell Nomi and Lil’ Rag to get more stats on the board, depending on which minions have received buffs.