After weeks of multiple pre-expansion story teasers, Blizzard finally let the cat out of the bag: Rise of Shadows will be Hearthstone’s upcoming expansion and the first of three in the new Standard rotation, the Year of the Dragon.

The story of Rise of Shadows is told by Hearthstone’s most evil villains, led by Arch-Thief Rafaam himself, best known for his never-ending thirst for powerful artifacts. The Supreme Archeologist, as Rafaam calls himself, managed to gather multiple antagonists of past Hearthstone expansions, including Dr. Boom, Hagatha the Witch, King Togwaggle, and everybody’s favorite fortune-teller Madame Lazul.

Together they plan to pillage one of the most iconic points of interest in all Azeroth – the flying city of Dalaran. This place is full of magic and power, not least because it is protected by the Kirin Tor, a conclave of the mightiest magi around the lands of Warcraft.

But what exactly could it be that Rafaam and the League of E.V.I.L. are after? How did Dalaran, one of the most visited and beloved capitals in World of Warcraft, became this wondrous city it is today, and which powerful artifacts lie within it?

The Nation of Dalaran 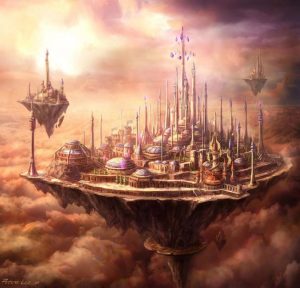 Dalaran hasn’t always been the floating mage city that almost all WoW players should remember.

Many thousand years ago, Dalaran was a nation and part of the Empire of Arathor, which rose as the first human kingdom found by several human tribes and the Arathi as their leader under King Thoradin.

Together as one nation they helped the Quel’Dorei, the high elves of Quel’Thalas, to fight off the Amani forest trolls, a common threat of both nations. In return, the high elves taught one hundred humans the use of arcane magic.

This act of elven kindness has been the hour of birth of human mages and the Kirin Tor. Later on, these mages chose to form their own city-state called Dalaran in hopes to be able to freely wield their new-learned powers. The city at the southern shores of Lordamere Lake turned into a wealthy magocracy, thirsty for knowledge about the arcane magic.

Archimonde, Malygos and The Lich King

During the Third War, as described through the storyline of Warcraft III, Dalaran as a city-state lived in its prime.

But with Arthas and the Scourge ravaging the Eastern Kingdoms, the citizens of Dalaran decided to help the people of Lordaeron. Lordaeron fell, as we all know through its present name Undercity, and with it Dalaran fell as well. Even Archmage Antonidas, one of the leaders of the Kirin Tor, couldn’t manage to stop Arthas and his brother in crime, Kel’Thuzad, a human member of the Kirin Tor who chose to explore the dark side of magic.

With the help of the Medivh’s Spellbook, a powerful artifact protected by the Kirin Tor, Arthas and Kel’Thuzad summoned Archimonde, the Eredar Overlord and right hand of Sargeras himself, who destroyed Dalaran in a heartbeat.

Left in ruins, the surviving members of the Kirin Tor managed to establish a magical dome around what was left of the city. Over the years they slowly rebuilt the city, protected but also isolated by their own power.

Decades later, as told in the WoW expansion “Wrath of the Lich King”, the Kirin Tor decided to move the city to the continent of Northrend. Up to this day it is not certain why the mage guild decided to set their city afloat. However, it is told that they wanted to provide some sort of magic headquarters to fight the Lich King, formerly known as Arthas.

The obvious motivation of why the Kirin Tor moved to Northrend would be revenge for what Arthas did to Dalaran during the Third War, but another big name of Warcraft history may have played an important role as well: Malygos, former Dragon Aspect, driven mad by the Old Gods, wanted to purify the world of all non-dragon magic users. That of course included the Kirin Tor, so they decided to turn their attention towards Malygos’ hoard on Northrend, the Eye of Eternity, to stop him together with the most brave champions of Azeroth.

As time went by in the World of Warcraft, Dalarn moved, with the release of the Legion expansion, yet again. This time the mage city was bound to protect the Broken Isles from what may be described as the third attack of the so-called Burning Legion, a demon army that has been threatening the people of Azeroth for the longest time.

Once again after WotLK, Dalaran became the main capital and player hub in World of Warcraft. Over time, the city grew both in numbers and cultural diversity. Gnomes, dwarves and even blood-elves inhabit Dalaran, learning about the arcane magics or trying to make a living through more worldly professions.

As you can see, Dalaran is the heart of arcane magic and magical power within Azeroth. But what could Rafaam, Supreme Archeologist and main antagonist of Rise of Shadows, be looking for when invading the flying city with his hit squad?

Many members of the community already mentioned a very particular topic when it comes to Blizzard franchises: Time-travelling! So how could Rafaam achieve that? That is where Dalaran’s most precious artifacts come into play. First off there is the Eye of Dalaran.

If you’re old enough, you may remember this artifact from the orc campaign in Warcraft II. Built by the Kirin Tor to reconstruct and protect the Violet Citadel, the stronghold of Dalaran and headquarters of the Council of Six, the powerful orc Ner’zhul and his minions stole the precious artifact to fulfill his plan of opening several portals to other dimensions to find a new home for the orcs after they lost the Second War.

While his intentions were not in vein as we all know not only from the history of the orcs but the WoW expansion Warlords of Draenor as well, he ultimately was captured by Kil’Jaeden, left hand of Sargeras, to become the first Lich King to rule the Scourge and terrorize Azeroth once again. Sadly, the Eye of Dalaran never made it back to its name-giving city. However, its location remains unknown, and since we don’t know much about the timeline of Rise of Shadows, it may very well still be secretly within city limits!

But Ner’zhul needed more than the Eye of Dalaran to enter other dimensions.

The Book of Medivh is another artifact that the Kirin Tor could protect in Dalaran. As the name says, it was written by the Last Guardian Medivh, a powerful mage who despised the Kirin Tor and who was bound to protect the lands of Tirisfal.

As already said, the artifact has been used by Arthas to summon Archimonde to destory Dalaran. The whereabouts of this book are unknown as well; what is known is that Khadgar, apprentice of Medivh, sent the artifact back to the Kirin Tor after using it to close the Dark Portal.

The last artifact used by Ner’zhul to open up dimensional rifts was the Jeweled Scepter of Sargeras. As told in the Warcraft Chronicle books, this scepter was forged by Sargeras himself, leader of the Burning Legion. This source of fel magic was used by multiple factions to exploit the fragility of space and time. Luckily enough, the Kirin Tor got their hands on it and keep it in a safe chamber ever since.

That’s a lot of stuff to steal for just one city! Even if we don’t know about the whereabouts of two out of three of those powerful artifacts, it could still be very possible that Rafaam looks to steal what he can find to travel back in time. In fact, his team members could share his evil plans to rewrite their history of evilness. Time travel has been a common theme in World of Warcraft, and thanks to its solid lore infrastructure we could see it becoming a storytelling tool entering the Year of the Dragon.

And even if Rafaam is just out for the more worldly riches of Dalaran, it still remains a city with the richest lore compared to any other point of interest in all of Azeroth. It surely will be a pleasure to experience yet another “alternative Warcraft universe” storyline told by Hearthstone. Hopefully we will see if the Kirin Tor and the Council of Six will be able to fight off Rafaam and save whatever artifacts there may be hidden!