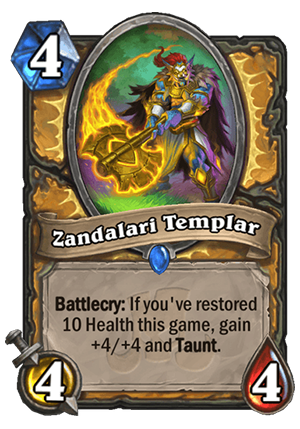 Well, this is Hooked Reaver 2.0. Both are understatted 4-drops that become big Taunts after you meet a certain condition. However, while in case of Warlock, the condition is pretty easy to meet eventually (I mean, most of the decks WILL damage you at some point, especially Aggro/Midrange which will try to kill you as soon as possible), this requires you to build a deck around it.

At first I thought that you can just slam it into Even Paladin and call it a day, but it’s not that easy. Healing for 10 in that deck is definitely possible, but not very probable in a timely manner, making it just too slow. I mean, yes, you can Corpsetaker + Blessing of Kings, which would in theory heal you for 14. But only in theory, because keep in mind that healing only occurs when you’re missing some health. Which might not be the case so early in the game. Heck, against Control deck it might not be the case until late late into the game when you’ve already went through most of your healing cards, and you’re forced to drop this as a 4 mana 4/4, which is not great. And even against Aggro, I don’t believe that you have enough consistent ways to heal in order to include that. You would need to revamp your deck heavily, but that doesn’t seem like the best idea.

So all in all, for me it seems like another push towards Control Paladin. The archetype is usually quite heavy on healing (although lots of the good ways to heal have rotated out of Standard this year), so healing for 10 wouldn’t be that hard… against faster deck, that is. But once again, my main issue with Control Paladin is that it doesn’t have a consistent win condition vs slower decks. It’s not like you will be dropping 4 mana 8/8 Taunts on Turn 5-6 – they just deliberately won’t damage you so you can’t heal, so by the time you deal that damage to yourself with weapons and then heal up, the card will no longer be that relevant. Don’t get me wrong, I don’t think that this card is bad. On the contrary, if a slower Paladin build with lots of healing is viable, this should see play in that deck. The thing is, is it really worth to run a deck like that if it doesn’t have consistent win condition vs Control and Combo?