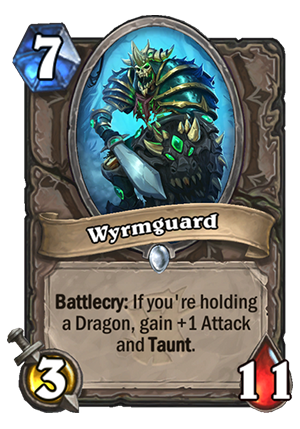 Wyrmguard is a 7 Mana Cost Common Neutral Minion card from the The Witchwood set!

Battlecry: If you're holding a Dragon, gain +1 Attack and Taunt.

Too bad that it’s not a Dragon itself, then it would be much better, as it would also activate other synergies if you draw it early. Right now drawing it early makes it completely dead. Without the Dragon synergy, it’s terrible, but you obviously wouldn’t put it into a deck which doesn’t play Dragons. With enough Dragons to pretty much guarantee the synergy, it’s a 4/11 Taunt for 7 mana.

Two points of comparison – first is Ancient of War. Those are roughly similar – 5/10 might be a bit better on Turn 7, because it clears the 5 health minions too. However, AoW is a Druid card, so this one can be played in other decks too.

So another point of comparison would be Bog Creeper – 6/8 Taunt. This has one more stat in total, but more health is always better on the Taunt, so the 4/11 is most likely a better distribution of stats. But it’s not like it’s much better – in slow matchups, the extra attack might actually be better than health.

To be honest, I’d probably rather play Primordial Drake. A big Taunt, it’s also a Dragon AND deals 2 AoE damage, which is much more important than more health against Aggro decks. The only downside is that it costs 1 more.