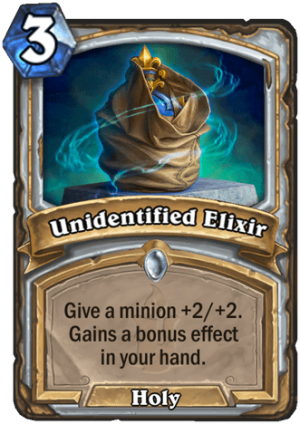 Unidentified Elixir is a 3 Mana Cost Common Priest Spell card from the Kobolds and Catacombs set!

When this card enters your hand it will be given one of the bonuses below.

Now there’s a weird card. Although the possibilities are interesting, they do seem a bit underwhelming at first. At 3 mana, +2/+2 is not the most exciting buff in the world, especially considering Priest’s history as a minion-heavy class. Dragon Priest used to be a thing of course, but it’s no longer seen in Standard and in most Priest decks, buffs are generally quite bad. Even with a plethora of cool effects attached to them, with dubious yet sweet value, what the Elixir needs in order to see play is a Priest deck that plays for the board, buffing and healing minions through thick and thin.

The actual bonus effects are relatively nice on their own – Lifesteal and Divine Shield are both solid defensive options and summoning a 1/1 copy or giving it “Deathrattle: Return this minion to your hand” are excellent value-oriented abilities when they find the proper target. But then again, that’s exactly the problem with this spell – it’s random. Since you never know what your Elixir will be for that game, you cannot actively plan ahead for it during deckbuilding other than getting the +2/+2 buff onto a minion. You can’t actively put cheap value Deathrattle minions in your deck because you are not guaranteed to get the two good options for them (although you are likely playing those minions regardless… anyway). By not being able to anticipate the buff with any certainty, you are left with a card that’s primarily exactly that – a boost in stats, which as I mentioned already is not good in existing Priest decks (yes there is the occasional Dragon Priest being experimented with). Without more support that’s unlikely to be a deck, although KFT’s Shadow Ascendant could be a possible indication towards incoming support, probably in the next set.