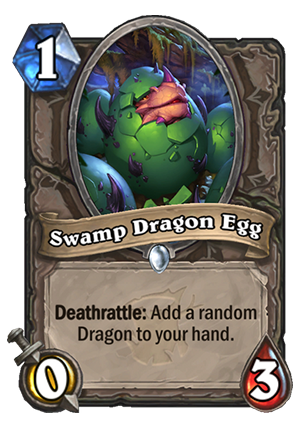 Swamp Dragon Egg is a 1 Mana Cost Common Neutral Minion card from the The Witchwood set!

Deathrattle: Add a random Dragon to your hand.

To be honest, I think it’s the worst Egg we’ve seen so far. Eggs that have seen at least some play – Nerubian Egg, Dragon Egg and Devilsaur Egg had some immediate board impact when damage/destroyed. That’s why they were strong – you sacrificed the immediate tempo in order to gain it back (and even more) later.

Another Egg, Runic Egg, is more similar to this one. It has seen some play, but only in Combo decks – decks that wanted to cycle as quickly as possible. That’s why drawing a card from your deck was important.

This card, on the other hand, doesn’t accomplish any of that. It doesn’t give you any on-board advantage, so doesn’t really fit into an Aggro deck. It doesn’t cycle, so won’t fit into Combo. Neither of those builds would want a random Dragon card anyway.

And if you play Control, why not just put a good Dragon instead of this card? Not only you don’t have good ways to benefit from it on the board, but you’d rather just have a way to proc your potential Dragon synergies immediately instead of waiting for it to get destroyed.

So I just don’t get why would you ever want to play this card. It’s just a delayed random Dragon in your hand. Maybe Quest Deathrattle Priest with some Dragon synergies, because it’s a 1 mana Deathrattle? I’m honestly not sure.