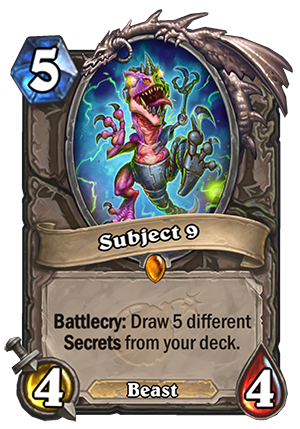 Subject 9 is a 5 Mana Cost Legendary Neutral Beast card from the The Boomsday Project set!

This card can be really strong in decks running Secrets. In order for this to be playable, I’d say that you need to draw 2 cards. 5 mana 4/4 that draws a single card is not bad, but not THAT good – Azure Drake was better, because it also had Spell Damage (and it obviously fit into many more decks). At 2 cards, however, it’s already really strong. 3 cards and it’s bonkers – you don’t need to go higher than that. While it can theoretically draw up to 5, you have to simply ignore that part. Not only you won’t likely put 5 different Secrets into your deck, but even if you do, you will most likely draw some of them before this card. Still, with 3 different Secrets in your deck, you should draw 2 pretty consistently. Sometimes you will low-roll and get only 1, sometimes you will high-roll and get 3.

This card will 100% see play in Wild Secret Hunter deck. Combo it with Cloaked Huntress to get out all of the Secrets for free and you’re set. As for the Standard, it’s a bit more complicated. First of all, there aren’t many decks that play Secrets. Paladin and Rogue most likely won’t want to play it for now. Paladin doesn’t have any great Secrets in Standard right now, while Rogue’s Secrets fit different kinds of decks and you won’t likely want to put all of them into your deck (maybe with two different Secrets… but I’m still not seeing it). So we’re left with Mage and Hunter.

As for the Mage, right now the class still has Arcanologist, which is one of the best 2-drops ever printed and it tutors Secrets. That’s why, unless you want to put LOTS of Secrets into your Mage deck, Subject 9 just isn’t necessary. Slow Mage decks don’t run Secrets at all after Ice Block has rotated out, and faster Mage basically runs 2 copies of 2 Secrets (Counterspell and Explosive Runes), sometimes with an additional one (mostly Mirror Entity), but rarely. So Arcanologists are enough to get them.

Which means that we’re left with Hunter. This card would fit best into Spell Hunter, but it’s a minion, so that’s that. However, I’d say that it will definitely be played in any Hunter deck running at least 3 different Secrets – maybe some Recruit Hunter builds without Prince Keleseth, maybe Midrange Hunter, maybe the new Mech Hunter if it plays Secrets.

All in all, this card has massive potential, but the problem is that right now there is no deck that would really want to play it. If Secret Hunter was still a thing in Standard, then it would be an auto-include there. But it’s not. So right now it might not see any serious play, despite being absolutely powerful.

Card rating: 9/10 potential, but probably 4/10 in the upcoming meta