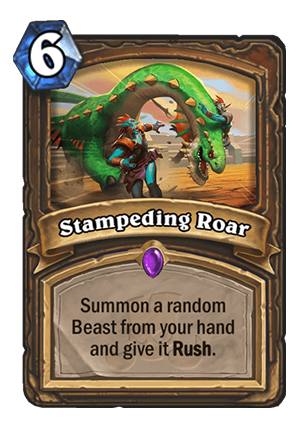 Summon a random Beast from your hand and give it Rush.

At first I thought that it’s pretty underwhelming, but then I’ve realized that it might not be the case after all. Of course, you want to play this in a deck which runs only the biggest Beast cards you can imagine, like 7+ mana, with Witchwood Grizzly probably being the only exception (because summoning it is not that bad, since it keeps full stats).

My initial problem with this card was that it’s 2 for 1 – you use two cards to get one body on the board. But then I’ve realized that you can basically use it like a kind of Innervate, even better one in some cases. The best case scenario is pulling a Tyrantus – it’s like gaining 4 extra mana that way. Assuming you’ve played Wild Growth, you can get a 12/12 with Rush on T5, something that’s absolutely insane in pretty much every matchup. Even pulling Oondasta which would pull another minion can be a huge board swing in your favor.

Even the Ironhide Direhorn from Rumble seemed pretty underwhelming at first, but if you could pull it for 6 mana AND give it Rush, then you’re nearly guaranteed to create an extra 5/5 after trading into something.

And the best thing is that the card disadvantage can be quite easily negated in Druid thanks to Ultimate Infestation, that’s why I believe that at least until UI rotates out, this card would see play in such an archetype (assuming it will work).

The deck’s concept still seems pretty janky, but I honestly think that it has some potential.

Technically, it could also be used as a Hadronox activator in Taunt Druid, although your opponent would need a 7+ Attack minion you could run into immediately.