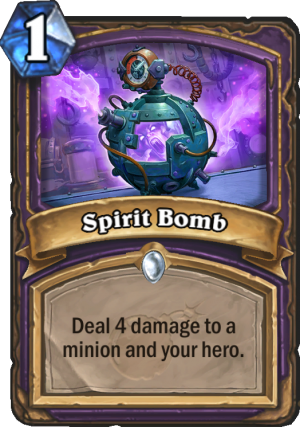 Spirit Bomb is a 1 Mana Cost Common Warlock Spell card from the The Boomsday Project set!

Deal 4 damage to a minion and your hero.

Compared to Darkbomb, it looks really, really poorly. Dealing 3 damage to everything vs dealing 4 damage to a minion is comparable, but taking 4 extra damage… oh my. In some cases it could be seen as an upside, but most of the time it will be a massive downside.

If you pay one more mana, you get Shadow Bolt without a downside. Is 1 mana worth taking 4 damage? Well, to be fair, some of the decks have no choice. If you want to play an early single target removal in Even Warlock, you can’t put the 3 mana spell in. So this might be played there. It buffs Lesser Amethyst Spellstone, and it brings you closer to a buffed Hooked Reaver. But it will probably be meta-dependent. If Aggro decks will play single, stronger early game minions – stuff like Hench-Clan Thug or Vicious Fledgling – then it’s solid. You take damage once, but you prevent them from hitting you multiple times. On the other hand, it’s really bad against Aggro decks going wide, such as Odd Paladin, and to a certain extent Zoo Warlock too (I mean, you will be able to answer one minion, but AoE is what you really need).

Maybe playable in non-Prince Keleseth Zoo Warlock? The deck doesn’t really care about damage right now, especially the healing build. But I’m not sure if it would want a reactive card like that, it prefers a proactive play style.

All in all, Even Warlock looks like the most likely candidate, but it will be a meta call. Right now, it might seem that the deck doesn’t need more healing, but the meta is incredibly slow and doesn’t have lots of burst. Try playing Even Warlock against decks like Tempo Mage or Odd Paladin all the time and you will notice that every bit of life helps, taking 4 damage just like that is often going to lose you the game. That said, if the meta will demand it, and people will drop high priority 3-4 health targets in the early game, it might see play.