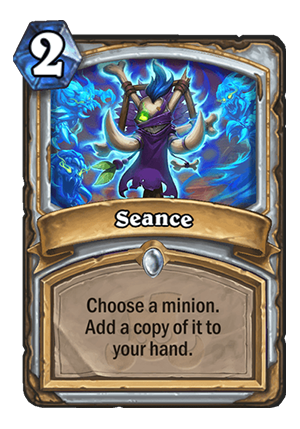 Choose a minion. Add a copy of it to your hand.

“The spirits spoke to me.”
"What did they say?"
"You had lethal two turns ago."
Tweet

Remember the good, old Convert? That’s what it should have been in the first place.

In general, it’s compared to a better Zola the Gorgon, and I have to agree with that – the 2/2 body wasn’t that meaningful, and 1 less mana + the ability to target opponent’s minions is probably better than the body anyway. BUT, keep in mind that Zola is generally not played in Priest. Well, sure, it’s played in some Quest Priest builds, but it’s basically an off-meta deck right now. So I guess that Seance would replace it in that deck.

So where could Seance see play? Certainly in any Princess Talanji deck – that’s a solid way to get a minion from outside of your deck, if you really want to go for that swing with Battlecry. You could theoretically get two copies of Prophet Velen with this, then drop Talanji and play a 20 damage Mind Blast, but to be honest, there are better ways to combo as a Priest.

It makes more sense to run it in Resurrect Priest than Zola – after all, getting an extra copy of some minions (like an extra The Lich King or Obsidian Statue, or Prophet Velen) can be a nice effect, but you didn’t want to play Zola, because the 2/2 body diluted revive pool. You can also copy a big threat from your opponent, remove it, and play it by yourself on the next turn. But as someone who tried out Convert when it came out back in the day, despite a pretty slow meta at the time, the card was just terrible, it never really came handy or felt good to use, so I guess that being able to target opponent’s minions is a nice, but not very relevant addition.

But I’m not as hyped about this card as some people seem to be. It’s very slow, you still pay 2 mana to just replace it with something else, copying your opponent’s minion won’t come up very often (and if you wanted to do it, Faceless Manipulator is way better). If anything, I think that it might see play as a part of some combos, but I don’t think it will be nearly as widespread as some people think.