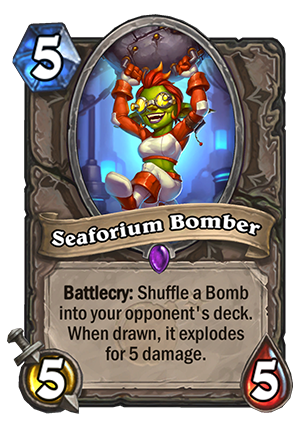 Seaforium Bomber is a 5 Mana Cost Epic Neutral Minion card from the The Boomsday Project set!

Battlecry: Shuffle a Bomb into your opponent's deck. When drawn, it explodes for 5 damage.

This is like a weaker, Neutral version of Iron Juggernaut from GvG. And while Juggernaut was a class card, Warrior had all kinds of decks, ranging from Aggro to Control, and it wasn’t played in any of them. It has only seen play briefly with Brann Bronzebeard, in Control/Fatigue deck, as a finisher. But 10 damage bombs were so much better than 5 damage bombs.

While this effect seems like something good in Aggro/Tempo decks that want to kill the opponent quickly, it really isn’t. Realistically, if you shuffle it when your opponent still has 20 cards in your hand, the chances that it will trigger during the next 5 turns are roughly 27.5%. I took 5 turns as an example, because by that time most of the games will be decided – either you will get ahead and be in a winning position, or your opponent will stabilize. But it basically means that 62.5% of time, it will be a vanilla 5/5 minion for 5 mana. Not very appealing, right?

The only realistic use for this card is in some kind of combo, or fatigue deck – a deck that can reliably force the opponent to draw all of those. This card can combo with Augmented Elekk just like Juggernaut could combo with Brann, but then again, it’s still only 10 damage. You CAN add Murmuring Elemental to boost it up to 20, but that’s a 3 card combo in Shaman, a class that isn’t know for its fatigue decks (I mean, Shudderwock Shaman gets to fatigue quite commonly, but it already plays its own combo and doesn’t need this).

All in all, it might be used by some combo off-meta combo deck, but I just don’t see it as a part of the meta.