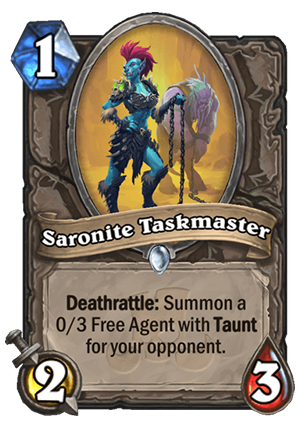 Deathrattle: Summon a 0/3 Free Agent with Taunt for your opponent.

Don't even think of asking for time off.
Tweet

Oh, a balanced version of Zombie Chow. To be completely honest, it’s not that much different in Aggro, but then again, Zombie Chow was never really exploited by Aggro (sometimes by Midrange, yes, but not really by Aggro). However, it is significantly worse than Chow was if you want to put it in a slower deck. The thing is, if you’ve played against a faster deck, healing them for 5 was completely irrelevant in the early game. It’s like you’ve played a 1 mana 2/3 with no downside at all. This downside, on the other hand, is much more noticeable, since you’re putting an extra body on your opponent’s side – even more, an extra body that will help them block your attacks from early minions and keep their own minions alive for longer.

So I honestly don’t see this being played in Control as an Aggro counter – 2/3 body is nice, but giving them 0/3 Taunt might put you behind if you have no easy way to get through it. In case of faster decks, however, a 0/3 Taunt will cost them 3 damage most of the time, sometimes 4 if they can’t deal exactly 3 damage. Yes, they would love to see that 3 damage go to the face. But on the other hand, having a stronger body on T1 will often make up for it – not only it deals more damage to the opponent, but also can make some early trades a 1/3 could not.

That said, it might be a little problematic in the Aggro mirrors too. It’s great if you’re ahead – killing a 0/3 Taunt won’t be an issue then. But if you’re behind, then you can’t really drop it, as it will often be traded for free and your opponent will get a 0/3 Taunt for their trouble. That 0/3 Taunt can then serve as a buff target for Fungalmancer, for example, and actually be used to kill you back. So the card works best if you’re playing Aggro and you’re in the lead, so usually vs slower decks. Can also work quite well for Midrange decks that want to curve out as best as they can.

All in all, I think that this card might find some play, but it’s definitely not as good as Zombie Chow was.