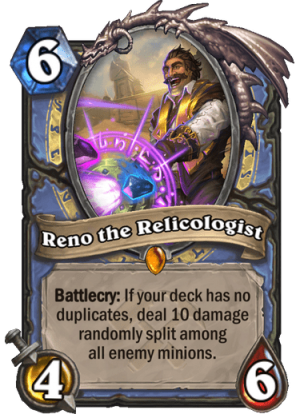 Reno the Relicologist is a 6 Mana Cost Legendary Mage Minion card from the Saviors of Uldum set!

Battlecry: If your deck has no duplicates, deal 10 damage randomly split among all enemy minions.

All his life, Reno Jackson was only a gatling wand away from becoming the greatest and most terrifying mage who ever existed.
Tweet