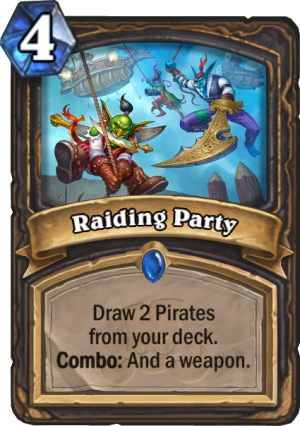 Draw 2 Pirates from your deck. Combo: And a weapon.

And a bowl of chips. And some of those little cocktail weenies!
Tweet

Tutoring 3 cards for 3 mana is absolutely broken. So that’s it, end of story, right? Wellll, not exactly. You see, the thing about tutor is that it’s good only if you have a deck that wants to tutor those specific things – in this case Pirates and Weapons. But the problem is that not only Pirate Rogue is not currently viable (it shapes up to be better in this expansion, but we’ll see), but a) it’s an Aggro/Tempo deck, so probably only a slightly slower build would want to run it and b) it might not want to run more weapon besides Hero Power (because at least right now there aren’t many great Rogue weapons available).

This card would be the strongest in some kind of Midrange Pirate Rogue that plays weapons too. In that kind of deck, it’s basically 10/10 – you get A LOT of juice just for 3 mana, and triggering Combo is not really that difficult. Even if you can’t trigger it, drawing two Pirates can still be a nice topdeck in the late game. However, whether a deck like that will exist or not heavily depends on how the rest of Pirate synergies in this expansion shapes up.

That said, I think that there is a deck that might want to play it right now. Probably not two copies, but one would be pretty solid. The deck is Kingsbane Rogue. It obviously does play weapon, so it would have another way to tutor it – either to draw it initially (which is key to victory), or to get the buffed one back to the hand. It also does run Pirates – some builds use 2x Cutthroat Buccaneer and Captain Greenskin, I think that 3 Pirates are enough to justify running one copy.

It’s odd-costed, so in theory you could also run it in some sort of Pirate Odd Rogue, but… I don’t think that would be a good card in there. Most likely you wouldn’t want to play more weapons than just your Hero Power, so the Combo part would be wasted. And just drawing 2 for 3 is not good enough for a fast deck like that.

Overall I think that the card has potential – I would playtest one copy right now into Kingsbane Rogue, and it might be a staple if some kind of Midrange Pirate Rogue pops out in the meta (they might be pushing something like that, after all, remember that one of the Rogue’s Legendaries will be a Pirate).

Card rating: 6/10 in Kingsbane Rogue, 8/10 in some kind of Midrange/Tempo Pirate Rogue ASSUMING it runs weapons (but I have doubts that a deck like that will exist), useless in regular Rogue decks