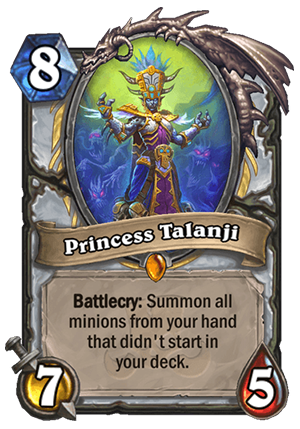 Battlecry: Summon all minions from your hand that didn't start in your deck.

Everyone wants to be a princess, but nobody ever considers the size of the hat.
Tweet

In theory, an effect like that can be a massive tempo swing. Even just 2 bigger minions or 3-4 smaller ones means that you basically flood the board and you force your opponent to play a board sweeper (if he has one) or he loses the game. But I don’t think that the card will be particularly good, because it forces Priest to run some… suboptimal cards. And even then, it’s not that consistent.

You see, while Priests have some ways to get minions that didn’t start in their deck (e.g. Cloning Device, Thoughtsteal, Curious Glimmerroot), most of those cards are generally pretty bad (Cloning Device) or won’t consistently give you what you need (Glimmerroot). If you want to go for a really long game plan, you can also play Archbishop Benedictus, and then hoard a lot of minions and play Talanji… but that’s not the best play either, because you play right into your opponent’s AoE.

So, to make the long story short – the effect is rather difficult to utilize without putting sub-optimal cards in your deck, it’s just bad against Aggro (because it’s slow and you won’t likely steal anything meaningful from them anyway) and against Control you’d often rather play those minions one by one to not play into their AoE sweepers they’re just waiting to use and would be dead in their hand otherwise (or forced on 1-2 minions).

In theory, I could see this card in a deck devoted to effects that “steal” cards, discover them or give you random cards, e.g. Glimmerroot, Stonehill Defender, Bone Drake. But this entire deck would be rather clunky if it would rely on a single big board swing to win the game. Technically, pulling let’s say 20 mana worth of stats from your hand for 8 mana is great, but I don’t think that it would be consistent enough.