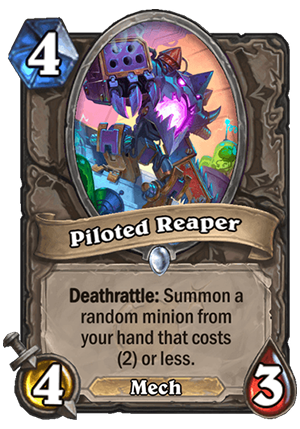 Deathrattle: Summon a random minion from your hand that costs (2) or less.

New, more fair version of Piloted Shredder. It has the same stats, the same “sticky” nature, and is even easier to control. So it’s better, right? Well, not exactly. What made Piloted Shredder really good is that it generated an EXTRA random 2-drop. This one pulls it from your hand, meaning that despite you getting an extra tempo, you end up with a card disadvantage. Also, you usually want to play your 1 mana card on T1, then 2 mana card on T2. So by the time you play this, you might not have anything to pull out of your hand. Same goes for the late game scenarios – especially in a top-deck mode, you won’t keep your 2-drop just because you might draw this next turn.

That said, Mechs have some good 2-drops. For example, pulling out Upgradeable Framebot is a really solid tempo play. But that’s like the best case scenario. Lots of time it will be just a vanilla 4 mana 4/3. And later in the game, when you have enough mana, you could just play that 2-drop besides it, you don’t need to cheat it out on the board.

Might still be played in some Zoo-style decks, but it’s far from the power level of Piloted Shredder. But funnily, it being more controllable makes it a nice trolling material. For example, you run it in a Doomsayer deck. Your opponent trades into it, not expecting Doomsayer, but rather some small minion he can kill… and boom. Mind games! Most likely not a great strategy, but hey, at least my reaction would be priceless.