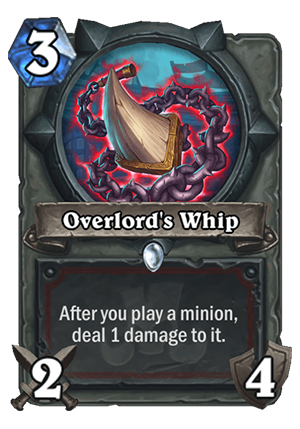 After you play a minion, deal 1 damage to it.

"This merit badge is for cruelty. This one's for whipping. And this one is for embroidery..."
Tweet

We already had a card that damaged everything you’ve played – Animated Berserker – and it didn’t run out to be very good. It had pretty weak stats and damaging your minions turned out to be good less often than players have expected. But this seems like a better version of that card for a few reasons. First of all – 1/3 for 1 are your average stats for a while now, it’s nothing impressive. But a 3 mana 2/4 weapon is pretty good – while 2 is not the most exciting amount of damage (as many early drops have 3 health right now), the amount of durability makes up for it.

Since it’s a weapon, it’s also harder to destroy than a 1/3 minion. 1/3 minion dies to anything – weapons, small removals, other minions. Weapons can only be destroyed by a specific tech cards that your opponent might not even run. In that case, you can guarantee that you will have this effect up for a longer time.

However, another problem is that even in a deck with minions that you want to damage, you also play a bunch of minions you don’t want to damage. Let’s say that you run Kor'kron Elite – you’d rather not turn it into a 4/2 for no reason. And the fact that it damages EVERYTHING, no matter what, makes it a bit awkward.

That said, there are some nice synergies with this card. Acolyte of Pain, for one – you get one draw immediately, nearly guaranteeing two draws in total. Grommash Hellscream is a 10/8 minion with Charge since his effect is automatically triggered. Redband Wasp is a 2 mana 4/2 with Rush, also quite good. Rotface summons a random Legendary minion immediately. Yes, there are definitely some cards that benefit from this weapon, but it’s still a bit weird to use.

One more thing worth noting is that it’s an Odd weapon – Odd Warrior might want to play it depending on the meta (if there will be a lot of 1-2 health minions running around), 2/4 stats can be much better than a 3/2 (Fiery War Axe) in that kind of meta, and War Axe was already played by Odd build.

I think the card has some potential, but it doesn’t look amazing so far. In order to make it 100% consistent, we’d need an ENTIRE deck with self-damage synergies, and that’s not something easy to achieve (given that we know nearly every card from the set, it’s pretty much impossible for now).