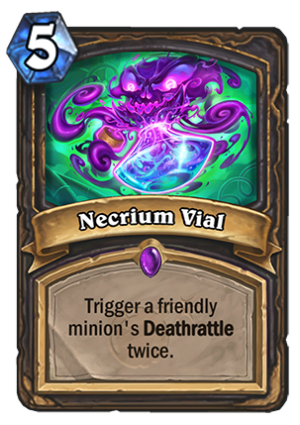 Necrium Vial is a 5 Mana Cost Epic Rogue Spell card from the The Boomsday Project set!

Two near-death experiences for the price of one!
Tweet

TIL Play Dead x2 = 5 mana. While I have no way of knowing, I think that Preparation really has something to do with it. On the one hand, it’s one of the reasons why Rogue is a solid class nearly every expansion, on the other hand it really, and I mean REALLY limits the design space and I hope that it rotates out + they start giving Rogues well-priced spells. Because I get it, if it costed let’s say 3 or 4, then it would be too strong with Prep and some crazy combos would be available.

However, even at 5 mana, with Preparation (so at 2 mana really), I can see it being abused in some decks. The most obvious choice is of course Deathrattle Rogue, but it’s hard to say whether a deck like that will actually be viable. Triggering Deathrattle twice might not seem THAT much better than doing it once, but it really is more impactful. Just dropping Carnivorous Cube on anything and then using this will create 4 extra bodies on the board. It doesn’t have to be big – Cube a Fal'dorei Strider or the spider you get from him or something, this kind of board requires an immediate AoE clear. And normally if you flood the board, and it gets cleared, you end up behind both in terms of card advantage and in tempo. In this case, you still have tempo (if the Cube isn’t Silenced), and you didn’t have to use that many cards to achieve that.

Another great candidate for this card seeing play is Malygos Rogue. Play Kobold Illusionist when Malygos is the only minion in your hand. Prep this. You have +10 Spell Damage and 4 mana to play with. Just 2x Sinister Strike is 26 damage, add in a Shiv or Eviscerate and you’ve got yourself a proper OTK. If you also play the weapon (Necrium Blade) you can get another Malygos out for 5 more Spell Damage, now you might have enough to actually kill a Druid (55 damage from 2x Sinister + Eviscerate). This kind of card can be useful in all kinds of shenanigans, and we all know that Rogue players are itching to build another combo deck.

So while it might seem that 5 mana cost on this is a huge overkill, it can be justified in the right deck, especially if you can combo it with Preparation. If you can’t (so probably most of the time) – it might get clunky, but it’s not a bad card. I’d still gladly see Preparation gone, though, and then cost of this decreased to 4, cost of WANTED! decreased to 3 etc. to be actually reasonable without having to use an extra card. 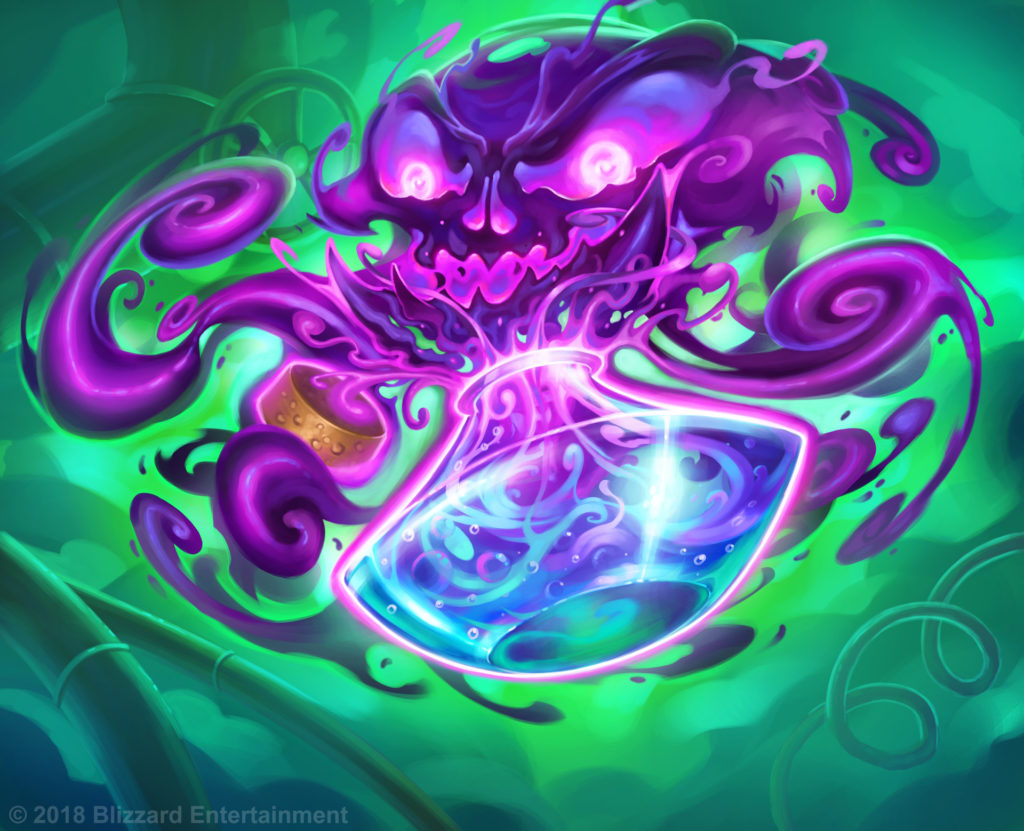