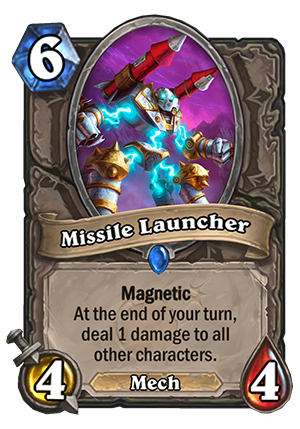 Magnetic At the end of your turn, deal 1 damage to all other characters.

We asked, "Where do the missiles go?" and he answered, "Yes."
Tweet

A really interesting card. The best point of comparison would probably be Dread Infernal. This has a significantly weaker body, but the AoE is repeated. Another point of comparison would be Baron Geddon – while it costs 1 more, it has a much better body and deals 2 AoE instead of one. And, to be honest, it kind of pales in comparison with both of those. It has Magnetic, so it can also be used as a buff, which is always a nice thing. The craziest combo would obviously be this card + Toxic Arrow. Giving it Poisonous means that it’s a full board clear every single turn. However, keep the word “full” in mind – it would also clear all the minions YOU have, so the only way to get more stats on the board would be buffing this guy. It’s of course great, but it’s still an 8 mana, 2 cards combo in Hunter, a class that isn’t necessarily known for great cycling capabilities. If it was meant to be great, players would at least experiment with the same combo on Geddon, but it never really was a thing. Another cute combo is Snowchugger in Wild. Since you damage everything, you freeze everything each turn, which can potentially win a game if your opponent has no Silence/direct removal.

It’s a cool card, but it’s usability is mostly tied to the how the meta looks like. 6 mana for a 4/4 body is terrible, so the effect simply needs to be great in order to compensate for that. If board flood decks such as Odd Paladin or Zoo Warlock are all over the ladder, then this card might make sense in Mech decks. If not, it’s probably too week. So I’d say that it’s an okay tech card, but nothing more than that.