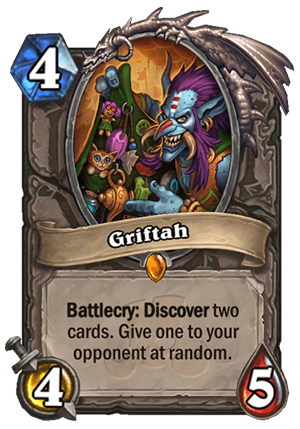 Battlecry: Discover two cards. Give one to your opponent at random.

With Griftah in your deck, sometimes you start the game with The Coin!
Tweet

This is surely an interesting, but also pretty frustrating effect. This card is basically a Chillwind Yeti with a mirrored effect. Mirrored effects work when you can take a bigger advantage of it than your opponent, but is it like this with Griftah?

The text might be a bit complicated when you first read it, but the card is not very complicated. You play it, you get one Discover UI – you pick a card. Then you get another Discover UI – you pick a second card. You get one of those cards and your opponent gets another (at random – you might get the first or the second one). While most of you should be familiar with Discover mechanic, I’ll remind that you can only pick from Neutral + Class cards, but Class cards are weighed at 400% (so a specific class card has 4x the chance of appearing as a specific Neutral cards). However, since there are more Neutral cards in general, they should appear at a roughly similar rate (you should see as many Class cards as Neutrals).

So, you’re basically playing a Yeti that gives you and your opponent a random card? Well, not exactly. The Discover part is very, very important. Since you pick both of those options, it’s actually a massive test of skill. You need to identify what kind of strategy your opponent is playing, what is his win condition, how he wants to get there etc. You also need to understand the same thing for your own deck. Then you try to pick two cards that are going to help you more than your opponent. For example, let’s say that you play this in a slower deck and you play vs Aggro. One of the option you pick is some sort of life gain, and another one is a big late game minion. Neither of those options is good for Aggro – life gain is meaningless, and by the time he gets to play that minion you will most likely stabilize already and it won’t be that big of a threat. On the other side, you would be happy to get that life gain, and while the big minion will probably not be very good, you might still have enough time to play it and it might do something. So, no matter which card your opponent gets, he won’t be happy with it – if you get one of them you will be happy and you don’t mind the other one too.

This card also lets you go for a 50/50 in a situation in which you’re losing the game already. For example, you’re behind on the board and you need some big AoE to win it. You can pick it, and then pick the worst card of the three. You have a 50/50 to get the AoE and possibly come back next turn. Technically, you COULD also use it in an Aggro or a faster Midrange deck to get more steam – in general, you don’t care that much about giving your opponent new cards. Also, another advantage of this card is that you know what both of you have, but your opponent does not know what you have. So you can use that knowledge to play around what you’ve given to him, while he can’t play around the card you got.

So, as you can see, the card makes some sense, and I know it sounds weird when talking about RNG card, but it’s one of the most skill-testing card in the game. But all in all, it’s still pretty bad. If you pick two weak cards, it’s not meaningful enough – Yeti stats aren’t cutting it anymore if you don’t slap a powerful effect on them. In other scenarios, it has a very high chance of backfiring – picking one strong and one weak card means that you might get the wrong one; it’s too slow in Aggro (and there’s no telling that he will give you something you want anyway). I just don’t see a deck that would really want to play it. I think that the card would be much better if you first picked a card for yourself and then for your opponent – this way you would keep it as a kind of mirrored effect, but would lower the RNG and increase the skill cap significantly. 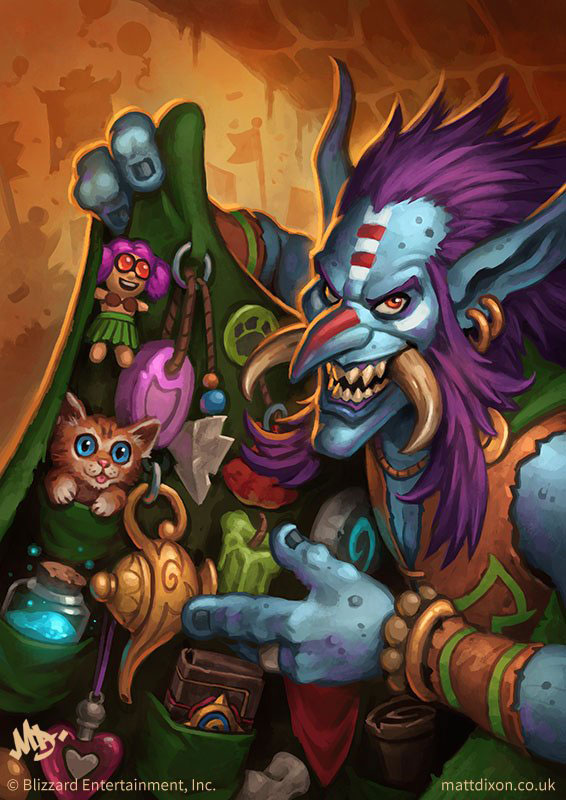