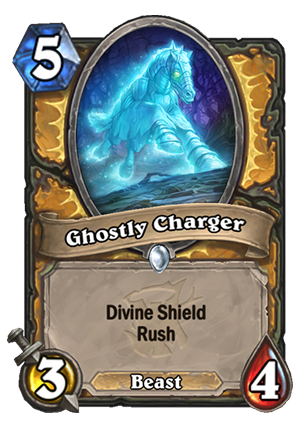 Ghostly Charger is a 5 Mana Cost Common Paladin Minion Beast card from the The Witchwood set!

Maybe we should have called him Ghostly Rusher.
Tweet

It would be much better as a 4/3 instead of a 3/4. Since it has Divine Shield, having higher attack would make it better. 3/4 with Rush and Divine Shield is an interesting combination. It seems pretty weak for a 5 mana card, but remember that Argent Commander is a thing. Yes, it has Charge, but it costs 1 more mana and is a 4/2 instead of a 3/4 (and I think that 3/4 is better than 4/2 even given the Divine Shield context).

The main problem with this card is that on Turn 5, you often don’t have anything you can kill with it. It would be great at killing the 3-drops, but that’s one turn too late. Most of the 4-drops and 5-drops have AT LEAST 4 health, possibly even more, which makes it a bit awkward.

It might be a solid clean-up tool. For example, clearing a 3/3 and still having a 3/4 on the board is not that bad, but is it really worth 5 mana?

You can actually see this card as a sort of 3/4 for 5 that deals 3 damage to a minion on a Battlecry. Which is kind of like a mini Firelands Portal which can’t go face. Or maybe even closer comparison would be Flanking Strike – which costs 1 less mana. For 5 mana, Rogues get Vilespine Slayer, which can straight up remove anything while leaving the 3/4 body too… Of course, those are different classes, and the context is different, but it still doesn’t feel too good.

In the end, it looks like a good Arena card and an average Constructed one. Probably not good enough to see play.