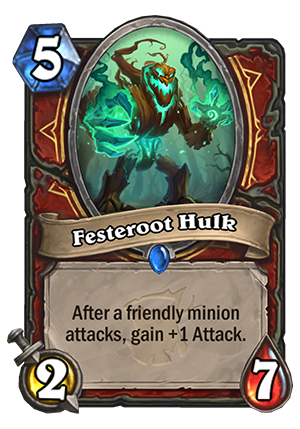 Festeroot Hulk is a 5 Mana Cost Rare Warrior Minion card from the The Witchwood set!

This card has nice ramp potential, but the starting stats might make it a little too weak to actually see play. 2/7 for 5 is bad. You’d realistically need to get it to 6/7 before you’d actually want to put it into your deck. So your minions need to attack 4 times before this card is something you’d want to play. And then it snowballs.

It synergizes with Rush minions, and it buffs itself after it attacks too, but I just can’t see it working too well. Warrior decks aren’t really about flooding the board. And with just a few minions, this will simply ramp up too slowly to be viable.

Maybe it could see play in some board flood deck, but right now there are no Warrior cards that would support such a thing. Which means that it doesn’t look good. You have to do some work to even bring this card into playable state, and then still do more work before it actually snowballs enough, making it too slow in the decks Warrior might play.