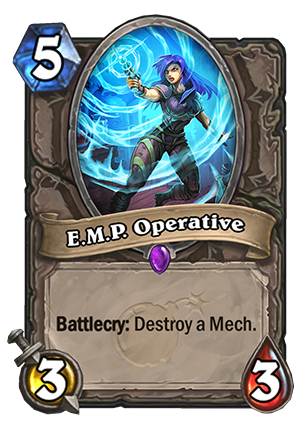 E.M.P. Operative is a 5 Mana Cost Epic Neutral Minion card from the The Boomsday Project set!

"I said this looks like a job for me
So everybody just follow me
'Cause we need a little E.M.P.
'Cause it feels so mechy without me…"
Tweet

Crab of the expansion! Except that it’s not a Crab. Which is pretty sad, I feel like Crabs as hate cards are a meme at this point and they should release more. Even if it had the same stats and effect.

Compared to other Crab cards, it’s clearly inferior. Unlike a 1 man 1/2, or a 2 mana 2/3, 5 mana 3/3 is not really playable by itself. If you don’t hit a Mech, it’s absolutely terrible. It also doesn’t gain any stats if you do.

Whether this card will see play or not is basically a meta call. Like, let’s say The Black Knight – a card we haven’t seen in a long while that made a comeback recently. If meta will be full of Mechs, being able to destroy one for 5 mana while getting a 3/3 body on top of that will be solid. I guess that they didn’t want to make it cheaper, because other crabs are frustrating to play against, the early game tempo swing can be so massive that one crab can just win the game. But come on, 5 mana 3/3 is too weak. Even if it actually HITS a Mech, it’s still a weaker Vilespine Slayer, a card that has absolutely no restrictions (yes, it’s an amazing card, but you get my point).

This is absolutely terrible if it doesn’t hit and only “good” if it does, which makes it less swingy and more risky to actually put into your deck. Crabs were solid even if only 10-20% of the meta were playing Murlocs/Pirates, because they could be dropped as vanilla minions on the curve too. Not great, but usually not game-losing. This is basically a dead card in non-Mech matchups. So in order for this to see play, Mechs would need to completely dominate the meta, and I mean it – I doubt that I would put it into my deck if less than 50% of my matchups were Mechs. And if Mechs will be a thing, Big Game Hunter will often do a similar job to clear the Magnetized ones, while also working against a bunch of other stuff. So it seems like a very, VERY situational tech card, pretty bad in general. I absolutely can’t see Mechs dominating enough for this to be played.