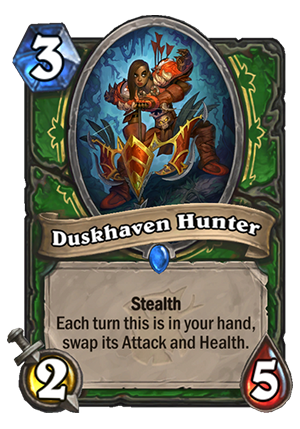 Duskhaven Hunter is a 3 Mana Cost Rare Hunter Minion card from the The Witchwood set!

Stealth Each turn this is in your hand, swap its Attack and Health.

After a short paws, she's back to herself again.
Tweet

This isn’t really too exciting. The whole stat switching thing is not great, because you can’t control it. It’s not like Druid of the Flame, where you can pick 2/5 or 5/2 WHENEVER you want.

The thing about 3-drops etc. is that you want to drop them on, well, that turn. If it’s your only 3 mana play, or your best 3 mana play, you’re going to drop it no matter whether it’s a 2/5 or 5/2 – it’s random, you have no control over it. Yes, in the late game, you can often just wait one turn, but it’s not always possible. You won’t float 3 mana just because you wanted this in another form, it’s not going to work.

Most of the time, this card only gives you an illusion of control, but realistically it often might as well be “the form is picked at random”.

I don’t really like this card in Hunter. Not only Hunter already has lots of good 3-drops (even those that are NOT rotating out), but those are not Beasts. Playing a Beast on Turn 3 is quite important, as it sets up a Houndmaster, which is a card that is basically in every minion-based Hunter deck.

I don’t like this card, because you can’t actively control which form you play it in. I’d rather put a 3-drop that is more consistent and I can build a part of my game plan around, rather than this.