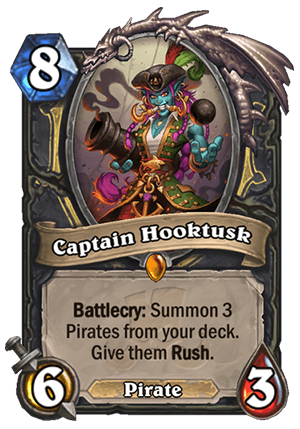 Battlecry: Summon 3 Pirates from your deck. Give them Rush.

Pirate Rogue really shaped up over the course of this reveal season, and this looks like a solid finisher, something to top your curve.

The 6/3 body is worth roughly 4 mana, although the stat distribution is pretty bad. Then the effect is just insane. I’ve seen people comparing it to Call to Arms, but it’s way, way better than that. Not only it can pull out minion that cost 3 or more (Southsea Captain, Captain Greenskin, Cursed Castaway), but it also gives everything Rush, so you can impact the board immediately. Let’s say that your opponent has dropped The Lich King and you have some board already – you can drop this and use the Rush minions to punch through it (while leaving a 6/3 body behind), while hit your opponent with the rest of your board. The Rush would even make cards like Ticket Scalper much more powerful (although I’m not sure if you would want to run it in the first place anyway).

And if your board sticks, you can follow it up with Cannon Barrage next turn to absolutely decimate your opponent.

But here’s the thing – this would fit more into a Midrange deck than into an Aggro deck, and Pirates are pretty aggressive. So far, every iteration of Pirate Rogue we had in the game was Aggro or at least a fast Tempo deck – Hooktusk would be too slow for the most part. So while in theory this card is quite powerful  if you curve a bit higher with your Pirates, a Midrange Pirate deck might just not work enough in the first place, and relying on this card to win every game is not the best strategy.

Also, I feel like the current pool of Pirates is a bit lackluster. We MIGHT still see a Pirate or two in the upcoming reveals, and I hope that we’ll get something Midrange-y to fit into a deck I’ve envisioned.

Card rating: 8/10 in the right deck, but might be too slow unless some Midrange Pirates get printed