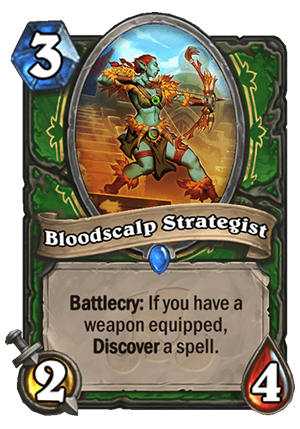 Battlecry: If you have a weapon equipped, Discover a spell.

“Shoot them in the face” is more of a tactic than a strategy.
Tweet

3 mana 2/4 that discovers a spell is pretty good. While you’d rather draw a card from your deck (Hunter’s pool of spells is large and not very consistent), you wouldn’t complain about that. The condition is… quite easy to meet if you’re running both Candleshot and Eaglehorn Bow, although you would sometimes need to drop it as a vanilla 2/4 or wait a few turns, because there is a quite high chance that you will draw this without a weapon or vice versa (and use your weapon before you draw this), your weapon can also get destroyed.

But the main issue I have with this card is mana cost. 3 mana slot in Hunter is soooo full. Animal Companion, Kill Command, Unleash the Hounds, Deadly Shot, Eaglehorn Bow, Bearshark, Stitched Tracker, Devilsaur Egg, Terrorscale Stalker, Spider Bomb… those are all 3 mana cards played in Hunter decks – of course not at once, but there are just so many of them that every Hunter archetype already finds this mana slot quite problematic and usually tries to cut from it, not put more cards in there.

It’s a good card, especially if Hunter gets another weapon it wants to play (because some decks don’t run Eaglehorn Bow, only Candleshot), but it might be very hard to slot into something.