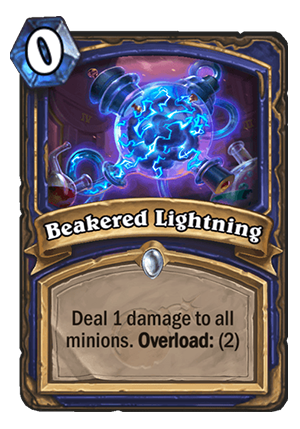 Beakered Lightning is a 0 Mana Cost Common Shaman Spell card from the The Boomsday Project set!

Working in a shaman's lab, it's important to be well-grounded.
Tweet

An early AoE removal for Shaman! But it ain’t Maelstrom Portal. While I’d say that 0+2 overload cost is generally better than 2 mana, not summoning a random 1-drop makes a huge difference. Not to mention that this hits ALL minions, not only your opponent’s minions, which is another reason why it’s worse (technically it can be upside sometimes, but later about that).

First of all, we can’t underestimate 0 mana spells. They can be really powerful in the right scenario. I just can’t stop wondering why does this Overload for 2. If it was like Zap! and Overloaded for 1, it would make much more sense to run it. In your usual Shaman deck, this is mostly going to be a meta call. If Odd Paladin or any other deck flooding the board with 1 health minions runs rampant, then there’s no reason to not run it. It can also combo well with Bloodmage Thalnos or another source of Spell Damage. I don’t like the fact that it hits EVERYTHING on the board, not just opponent’s minions, though. While it’s often an upside in Warrior (they have lots of Whirlwind synergies), it’s not really in Shaman. The only case in which this is an upside is Acolyte of Pain on the board, basically. The downside seems especially big when you roll a Spell Damage Totem – sure, dealing 2 is better, but the Totem (and your other Totems, for that matter) just dies.

It can be a nice addition to Malygos Shaman. In aggressive matchups, if you’re holding Malygos in your hand, sometimes a Turn 6 Eureka! + this can be a full board clear, and it still leaves a 4/6 Maly on the board. Later in the game you can also combo it with Omega Mind and Maly for a board clear + massive heal.

So my guess is that it will be a meta call. If Odd Paladin will run rampant, having a way to clear the 1/1’s and outtempo them outweighs the fact that you will be overloaded for 2 next turn. Like, if they go for Lost in the Jungle T1, then Hero Power T2, this + a 2-drop will be a great answer, even if you will only have 1 mana to work with on T3.

Card rating: Meta call, but my guess would be 6/10