With Patch 20.4 coming our way, the time is right for the second installment of Book of Mercenaries, Hearthstone’s new single-player adventure mode which has been inspired by the original Book of Heroes campaign.

This time we’re looking at Xyrella’s origin story. The draenei priest mercenary tells her tale about her family, the tragic fate of her people, and the troubles of becoming a servant of the light.

In this extensive gameplay guide, we will navigate you through the eight different encounters of “Book of Mercenaries: Xyrella”!

In the first encounter of Xyrella’s Book of Mercenaries campaign, we have to overcome Kargal Battlescar, a named grunt located at the eastern border of the Barrens.

The match starts with a special version of Tavish, the Hunter mercenary, on our side of the board. Whenever he kills a minion, he’ll reward us with a 1-mana treasure card. Playing that again will give us a random Hunter-themed card or a couple of coins. Since Xyrella’s early deck lacks card generation, additional resources are very much welcome.

However, Kargal and his Warrior-based deck shouldn’t be too much of an issue to get by. Keep Tavish healthy at all times and resurrect him with your special hero power if he dies. Remove the enemy board with spells like Forbidden Words or Holy Fire, keep ignoring the watchtowers he randomly creates, and continue your way through the barrens. 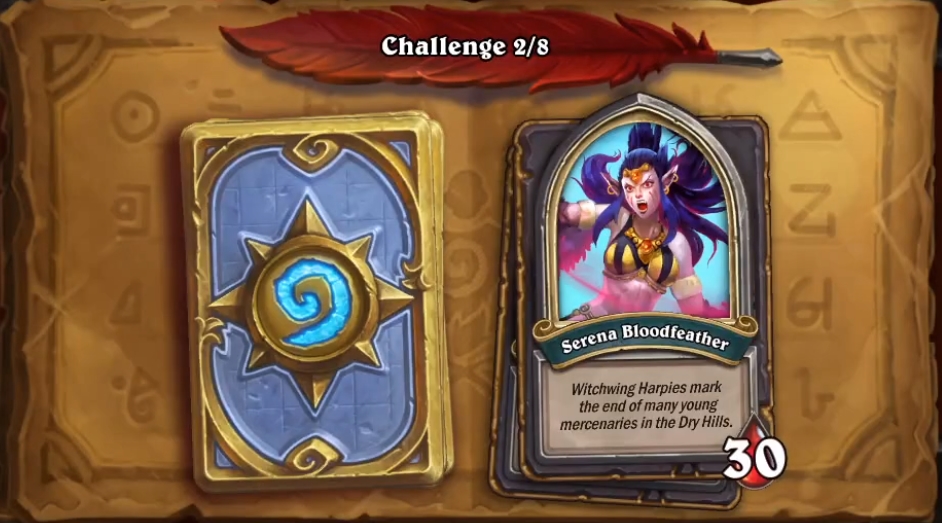 The odd pair continues its way through the dry steppe and encounters a creature called Serena Bloodfeather, queen of the Witchwing harpies.

Yet again it is Tavish and his ability to create random Hunter cards that lead us to victory. We can add a bit of early-game pressure with campaign-exclusive powerhouse minions like Baby Elekk – but our top priority still remains to keep the stealing dwarf alive and well.

Serena plays a wild mix of Priest and Warlock cards, combining face damage and minion buffing through cards like Shadow Ascendant or Spawn of Shadows. Her damage potential can be quite due to her 3-damage hero power as well, so make use of your healing tools.

Last but not least, try to not overplay the board because Plague of Death can wait just around the corner. If you follow these basic rules you should be able to defeat Serena thanks to late-game threats like Lightshower Elemental. 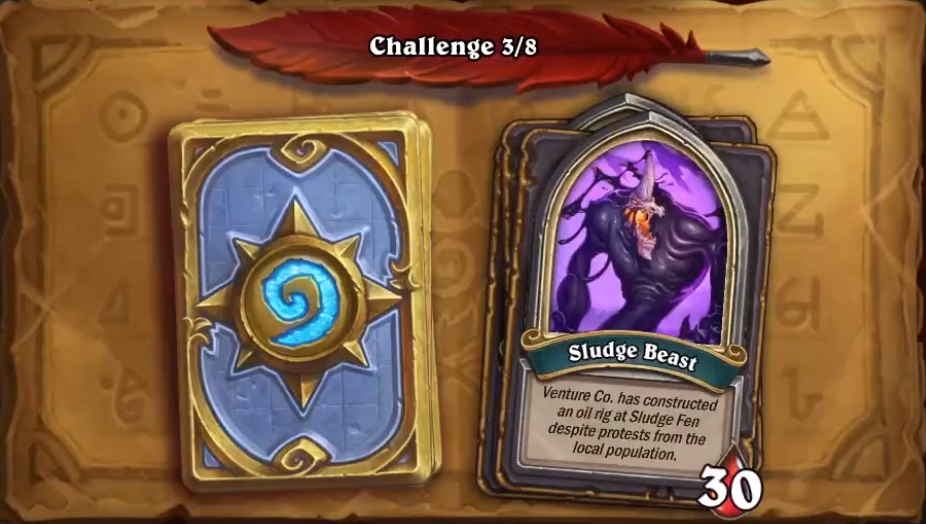 We find out that Xyrella is looking for her missing daughter. In a vision through the Light, she saw an iron tower in a black lake. Tavish suspects that the black lake could be Sludge Fen, an oil field in the northeastern parts of the Barrens and that the iron tower may be a construct of the Venture Co., a company of greedy goblins drilling for black gold.

The match starts out with Sludge Beast summoning a Reverberating Ooze right away that duplicates if it survives any damage. If you’re able to handle the monstrosities turn for turn you will run away with a quick win eventually, so try to mulligan for early-game cards like Holy Smite, Ethereal Augmerchant, and Baby Elekk.

If we take a closer look at Sludge Beast’s deck, we will notice that it consists of one thing and one thing only: Oozes, creepers, jellies, and all other sorts of wobbly creatures.

In the end, the key for easy ooze removal is Spell Damage. Cards like Velen’s Chosen and Ethereal Augmerchant turn Tavish into a mage-hunter, upgrading cards like Holy Nova and Condemn so that you can deal with multiple pesky sludges with ease. As soon as the enemy is only able to summon one ooze at a time in the end-game while you can build up a huge board, you basically won the match. 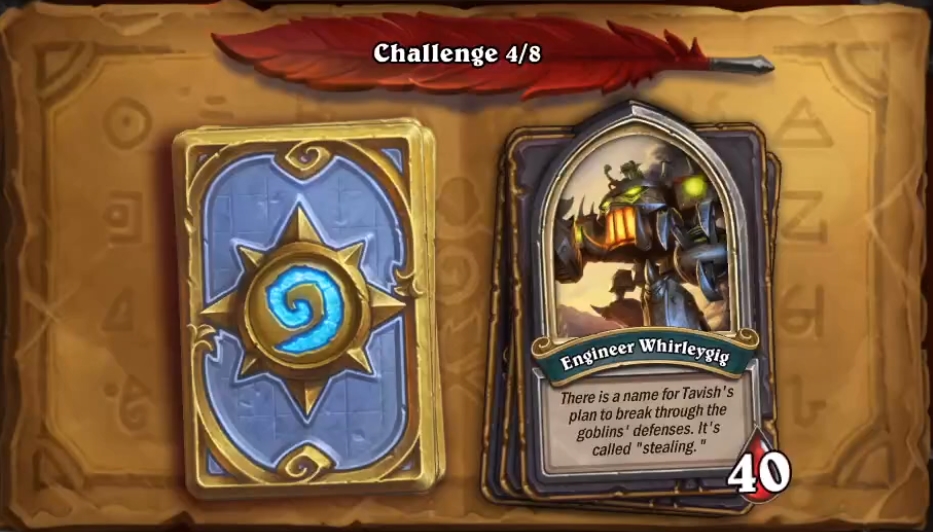 While fighting their way through the fen, Xyrella and Tavish notice a particular shredder that could make quick work of the goblin defenses.

This encounter will trigger flashbacks for some players. Why? Because Whirleygig, the goblin he is, uses the same alternating hero powers as one of the most controversial hero cards in Hearthstone, Dr. Boom, Mad Genius. But thanks to countless weeks trapped in the Control Warrior meta, all of us should have a good idea of how to deal with Whirleygig.

Thankfully, the engineer showcases a very weird and weak Warrior-based deck full of – you guessed it – goblins and mechs. The only thing that can turn things south for us are his bomb cards – but Xyrella’s deck doesn’t feature excessive amounts of card draw, so bombs should be no issues on average.

In terms of our game plan, everything goes as usual: Keep Tavish alive, buff him, don’t overplay minions because of Brawl, and control the enemy side of the board. 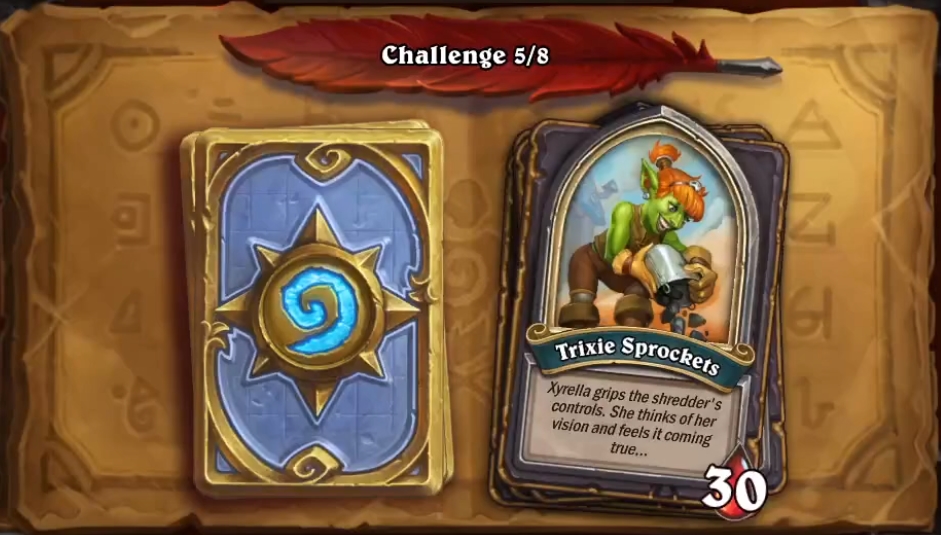 The dynamic duo manages to overtake the goblin shredder. Together with Tavish, Xyrella wants to find a certain shard she has seen in her vision as well, located on top of the “iron tower”.

As we make our way through the adventure thanks to a goblin invention, our deck does literally the same – and that includes the almighty goblin hero power!

After healing Tavish for three encounters, playing a Hunter-based mech deck certainly feels like a nice change of pace. Similar to Whirleygig, Trixie Sprockets uses some sort of goblin deck that focuses on removing our mech threats. Her 4-mana hero power holds massive removal potential as well but guarantees a slow turn.

However, you should act against your instinct to build up a big mech minion because of it. Going wide with your tokens instead is the correct decision in the long run.

Also, don’t forget to use the discover hero power whenever you can to obtain as much value as possible. Our match can go the full distance due to Trixie’s hero power but with enough random mech firepower, you will eventually snag the win. 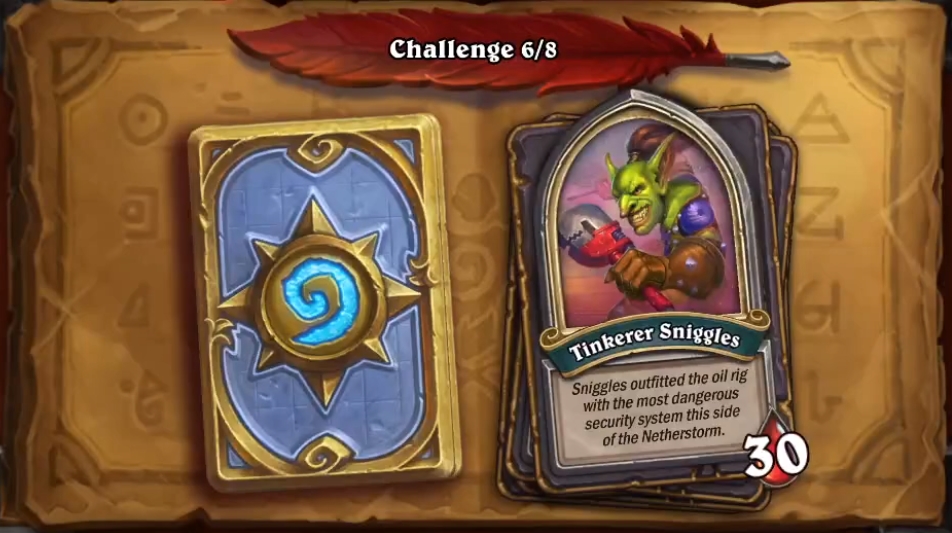 As they reach the top of the oil rig tower, Tavish and Xyrella find the “safety inspector” Tinkerer Sniggles – and with him a weird gnome rogue …

Against Sniggles, tempo is everything. That may sound counter-intuitive while playing a Priest deck, but starting with not one but two minions in the form of Tavish and Scabbs definitely gets us ahead early.

And to be honest, we need that early lead – because we will be in trouble as soon as Sniggles builds up his army of secrets. That again is the reason why it’s so important to prioritize our allies on board. Scabbs’ ability to remove big minions and us resurrecting him over and over make him a poisonous zombie that’ll win us the game in the long run.

The card that could serve as a combo-breaker, however, is one that all secret-based decks love to play on curve: Mysterious Challenger. Luckily, playing all secrets from all classes somewhat dilutes a secret deck’s power level, so if you keep your secret-solving game up you should be good to go. 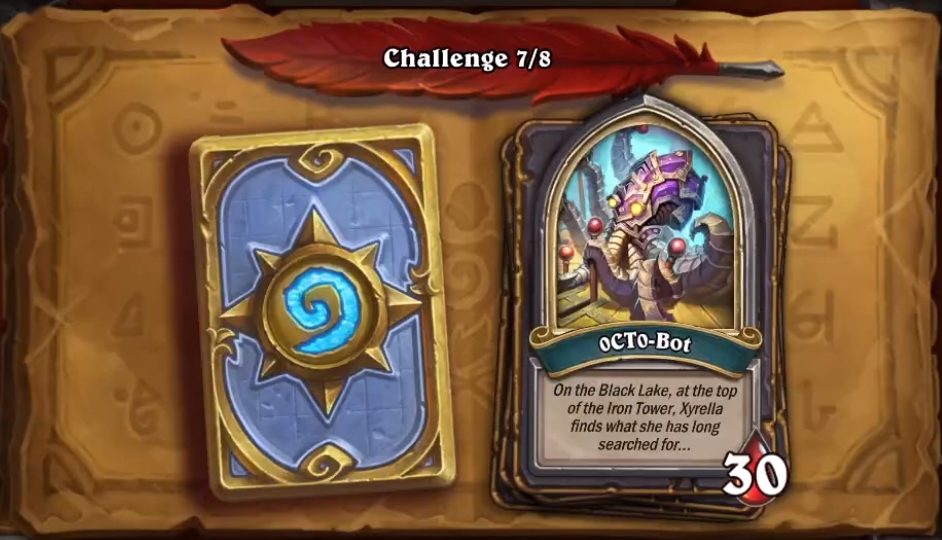 As it turns out, Scabbs, a gnome rogue, is on some sort of mission as well. As the three reach the top of the tower, they find a weird-looking mech controlling the oil rig.

This may be the first fight where things get hairy for our trio infernale. 0CT0-Bot uses a powerful Spell Mage deck to abuse the immense amounts of school-based spell damage to control our side of the board.

Having early board-clear like Condemn or Holy Ripple in your mulligan to overcome a board full of 2/2s over and over again is a great way to start the game against this mech, and Xyrella’s mercenary friends should focus on removing those pesky tentacles as well.

In this encounter, working together with Scabbs and Tavish becomes absolutely mandatory. Tavish’s Loot provides us with our one and only source of card generation. Don’t forget to trade with Tavish every single time – even if you’re intending to clear the board on your turn.

Dealing hero damage is no easy feat during this encounter but fear not: Once you get ahold of the tentacle respawn and can establish a board with late-game minions like Priest of An’she or Lightshower Elemental, you should be able to squeeze in a couple of face hits.

Again, prepare to play the long game against this literal Spell Mage bot – because your only real win condition is board control into late fatigue together with Tavish’s beloved loot card. 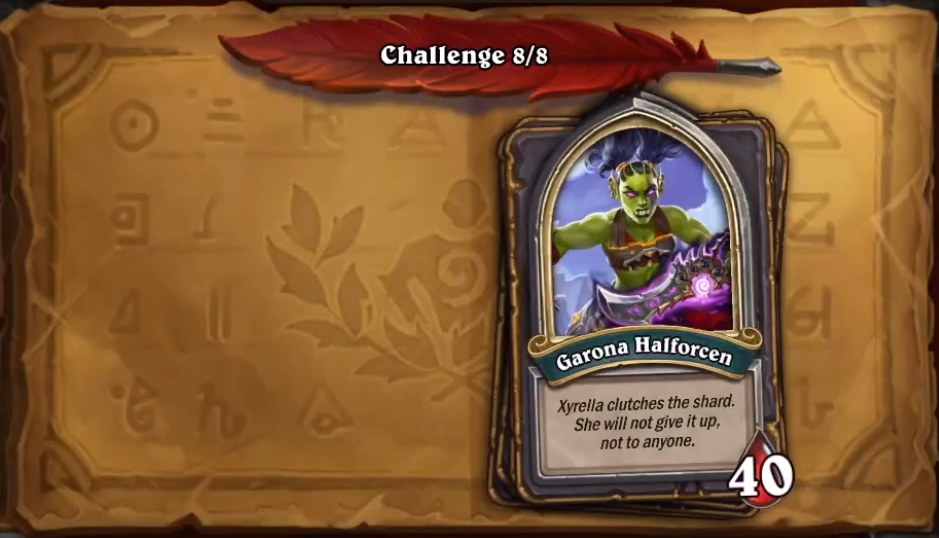 As the mercenaries crack the mysterious shard out of the freakish bot, all three recognize that the artifact is in fact exactly what they were all looking for. They decide to team up to bring the shard back to Stormwind – but a very particular half-orc sent by Kazakus himself intervenes.

Just like against the pesky bot, getting ahead early turns out to be essential. Taunt minions like Priest of An’she and Lightshower Elemental make a great case for themselves for obvious reasons involving Garona’s little dagger – not least because or deck severely lacks weapon removal against an “undying” weapon. As it turns out, good old Defender of Argus also serves as yet another key piece on our way to victory.

Similar to the usual Aggro Rogue/Control Priest matchup, the fight against Garona turns into a wild race of face damage against early defenses. Managing your alternating hero power together with aggressive trades can save your life over the course of the game. The one gameplay interaction to look out for is Betrayal against Scabbs – also known as clearing your whole board as soon as the gnome sits between two big taunts.

Build up your Taunt army as early as possible, don’t be greedy with removal spells against early-game threats, and the final encounter of Xyrella’s Book of Heroes campaign is yours to win!