(We know that Book of Heroes – Rexxar was released a while ago, but we never had time to post this, since it was a really busy time. So here it is now!)

In the second Book of Heroes adventure, players are able to experience the story of Rexxar, the original Hunter hero.

Rexxar has been one of the key figures in Warcraft lore ever since the golden Warcraft III days. His legacy as a Mok’nathal, half ogre, half orc,  illustrates the problems that each individual part of the “Old Horde” had to endure over the years of its existence.

Nonetheless, Rexxar serves as a figurehead for the Hunter community not only in Hearthstone. His design established the Beastmaster fantasy in Warcraft, an important part of today’s Hunter class identity. Together with his loyal companion Misha, the “Champion of the Horde” – as Thrall respectfully calls him – carries forth the Warcraft story up to this day. 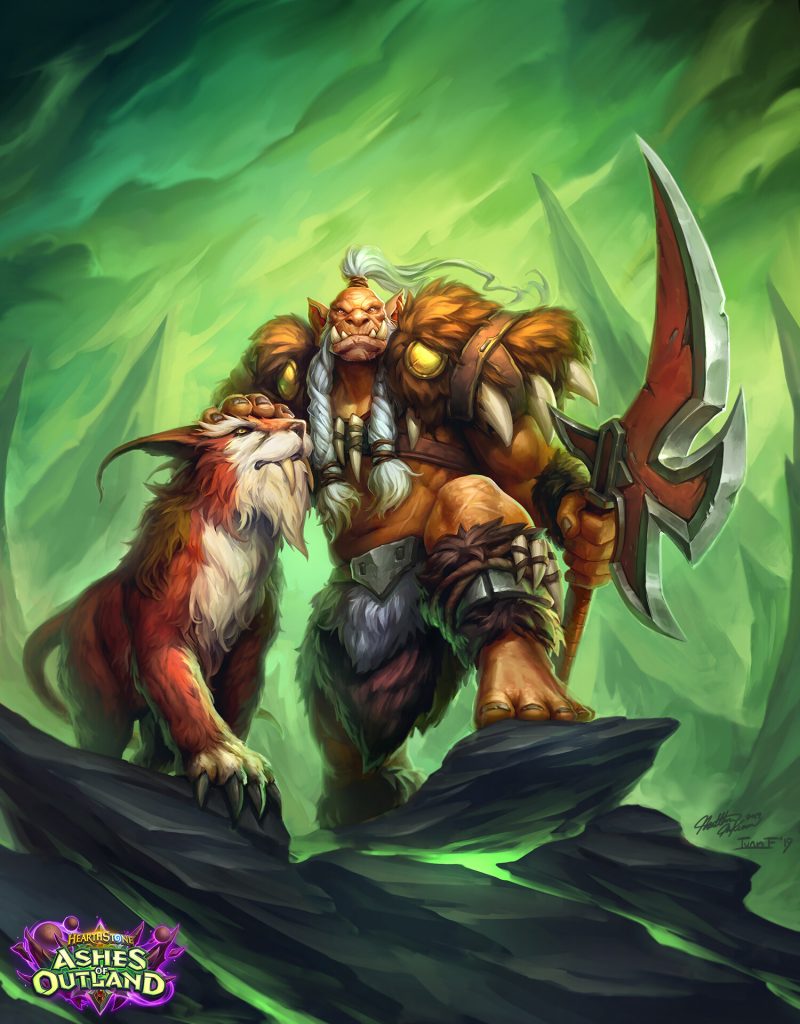 The adventure of the brave beastmaster starts with a dialog between him and his father, Leoroxx, chieftain of the Mok’nathal of Draenor. Ever since their creation, the mok’nathal lived between the worlds, thus lacking acceptance among the other Draenor races. After decades of fighting, Leoroxx made a choice not only for him but also for his tribe and his son: The mok’nathal would never fight again, and seclude themselves from the rest of Draenor in the cragged Blade’s Edge Mountains.

But as Rexxar grew up and forged his own personality, he decided to stand up against his father, whose stubbornness brought the mok’nathal to the edge of extinction due to lack of resources available in the scraggy mountains of their homeland. Rexxar’s only hope: The Mok’nathal need to join the Horde. 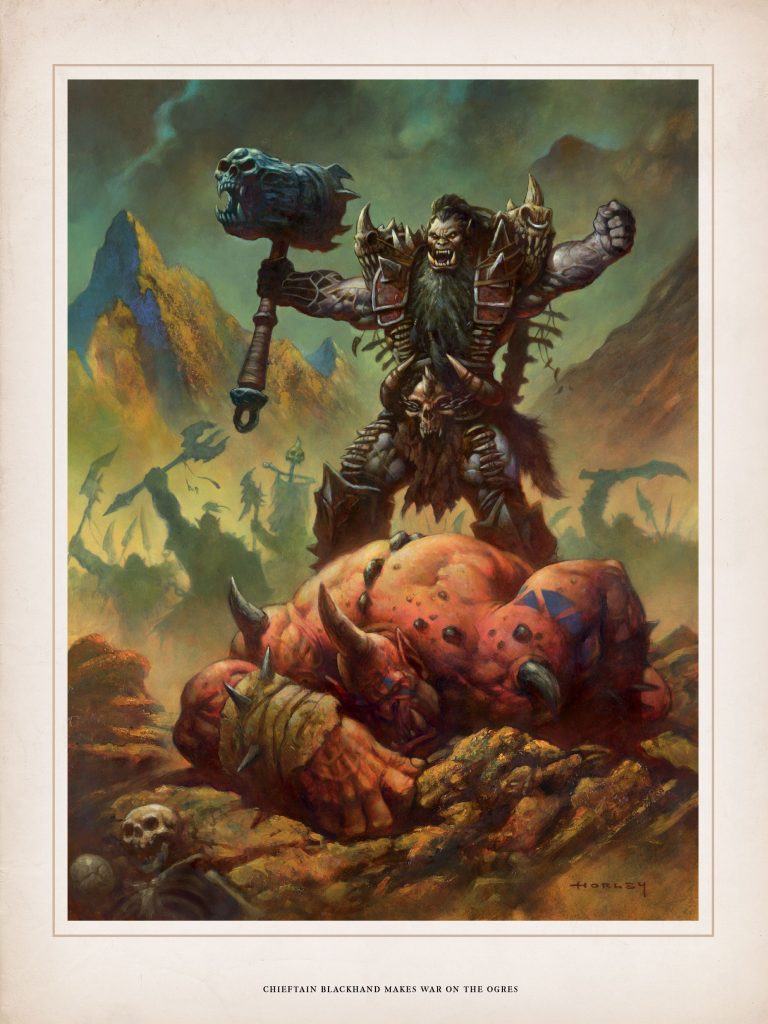 But Leoroxx knew the Horde, and he was convinced that by joining them, the mok’nathal would eventually end in slavery yet again. Driven by despair, Leoroxx banished Rexxar, his only son, to protect his clan at all costs.

Rexxar, now nothing more than a mercenary without a home, still hoped to convince the Horde of accepting the mok’nathal within their ranks and decided to meet with Blackhand, the first Warchief of the Horde.

Back then, he was the first to unite the orc clans of Draenor, turning them into a unified threat against anything different on Draenor, such as the Draenei for example. But not only did “his Horde” eradicate one of Draenor’s most ancient races; he also led the orcs into corruption by drinking the blood of Mannoroth. 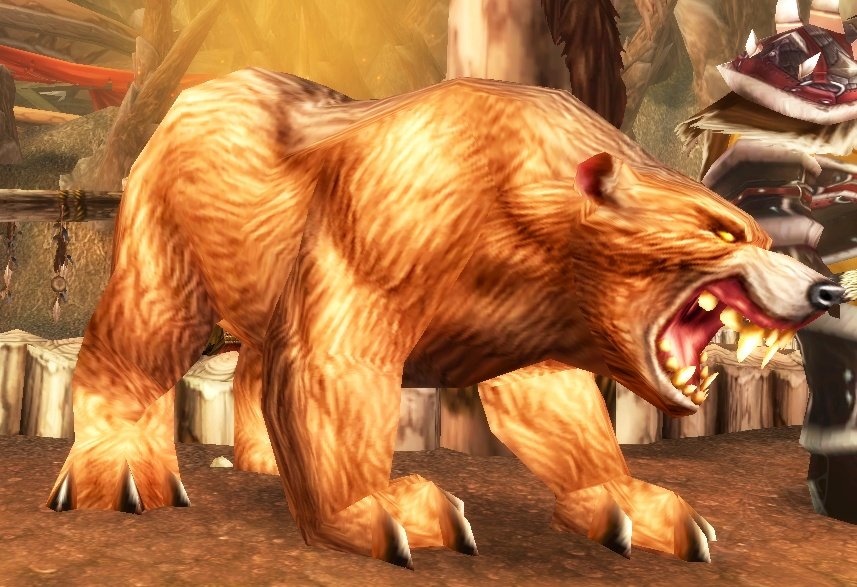 Luckily enough, the brutal Blackhand saw something in the beastmaster and chose to spare the mok’nathal from extinction and slavery. In exchange, the mighty Rexxar should serve the Horde for eternity.

He followed his new people with utmost loyalty through the Dark Portal into a new world called Azeroth. But after several wars, Rexxar, who even lost his loyal wolf Haratha to a bloodthirsty orc warlock of the Horde, wanted only the one thing that his father once strived for as well: Peace.

He left the Horde and its current warchief Grom Hellscream to return to his mok’nathal roots – and was on the look for a new trusty companion. 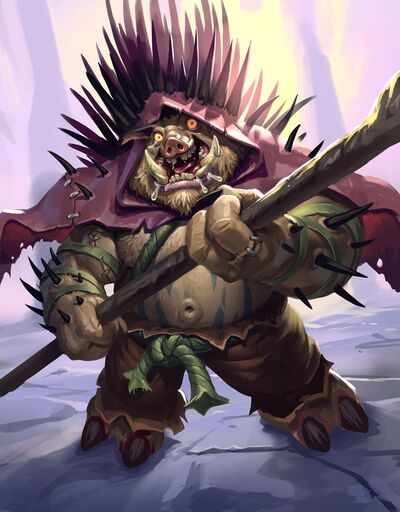 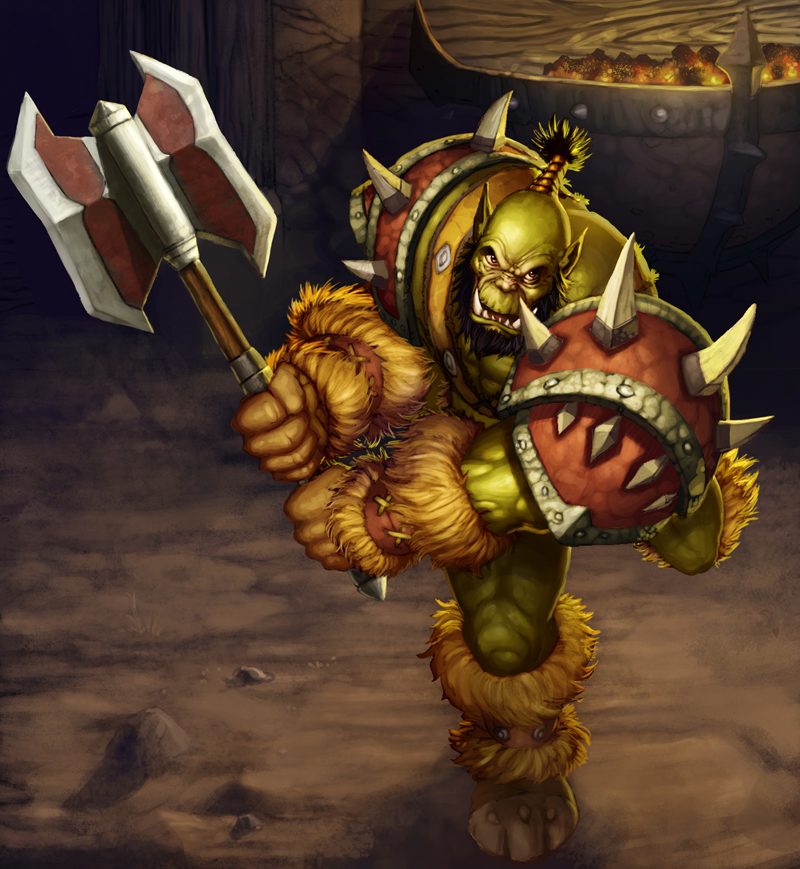 Invigorated by the power of nature and the companionship of his bear Misha, Rexxar decided to further explore the new world of Azeroth. One day, he encountered a fight between an orc and a group of quilboars. These primitive creatures inhabited the lands of Durotar and have been posing a threat to its citizens for the longest time.

The orc turned out to be Morgrin, a Horde messenger, who planned to transfer an important letter to Orgrimmar. 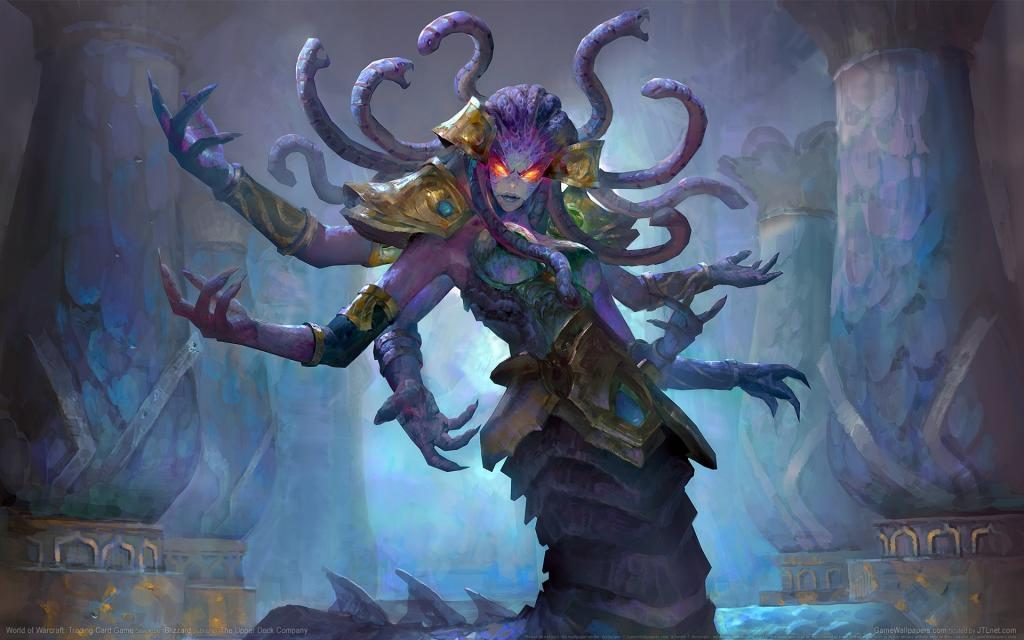 Sadly, Morgrin couldn’t make it out alive, but Rexxar avenged him and promised to deliver the letter.

The recipient of this letter is no less than Thrall, Warchief of the Horde on Azeroth. Thrall was nothing like Blackhand or Grom Hellscream. He respected Rexxar and the mok’nathal and welcomed him into the Horde.

Over time, Rexxar proved his worth as a member of the New Horde. At some point, Rexxar volunteered to look into strange Alliance ambushes against Horde settlements on the coastline of Kalimdor. The beastmaster didn’t trust the humans and suspected Jaina Proudmoore behind the attacks. But after meeting with Jaina, who was known for her peaceful attitude towards the Horde, they both found out about the real culprits who seemed to be responsible for the coastal attacks: The Naga. 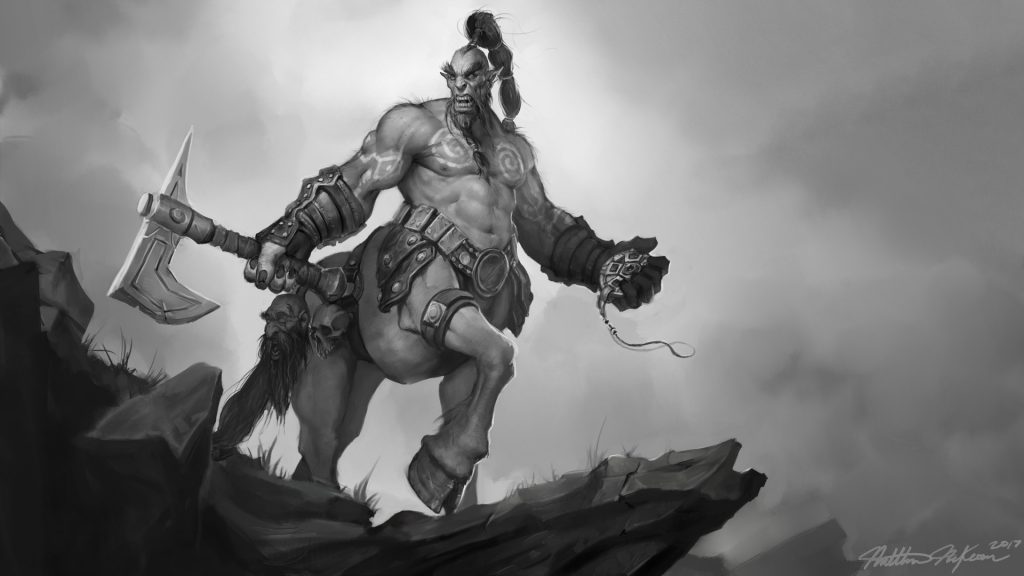 After Rexxar beat Lady Darkscale and her naga, his distrust towards the Alliance and Jaina Proudmoore faded, and he accompanied her to Theramore. However, the wounded footman that appeared during the fight against the naga indicated what Rexxar had already suspected: After all, the humans under Daelin Proudmoore, Jaina’s father and advocate of war against the Horde, were indeed involved in the attacks.

Rexxar managed to escape Theramore before Daelin was able to execute the mok’nathal, and from there on, his primary mission given by Thrall consisted of recruiting more potential allies for the Horde to fight against the Alliance – and the Tauren of Mulgore seemed like a perfect fit.

However, the leader of the tauren, Cairne Bloodhoof, had no time to even think about joining the Horde because Baine Bloodhoof, Cairne’s son, just had been kidnapped by the local centaurs. Rexxar, driven not only by Horde loyalty but also goodwill towards the tauren who reminded him of his own kin, decided to start searching for Baine. 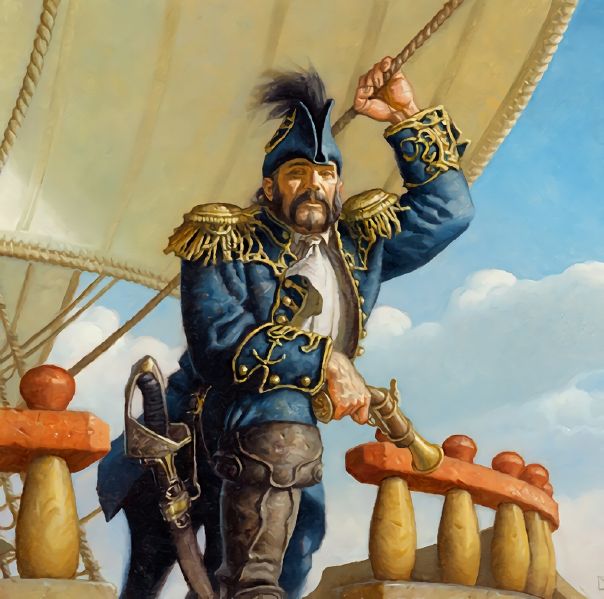 Eventually, Rexxar managed to free young Baine and returned him to his thankful father, who pledged himself and his tauren to the Horde in exchange.

With the help of the tauren and also the ogres of the Stonemaul clan that Rexxar managed to win for their cause, the Horde under Thrall was ready to fight Daelin Proudmoore and the Alliance. 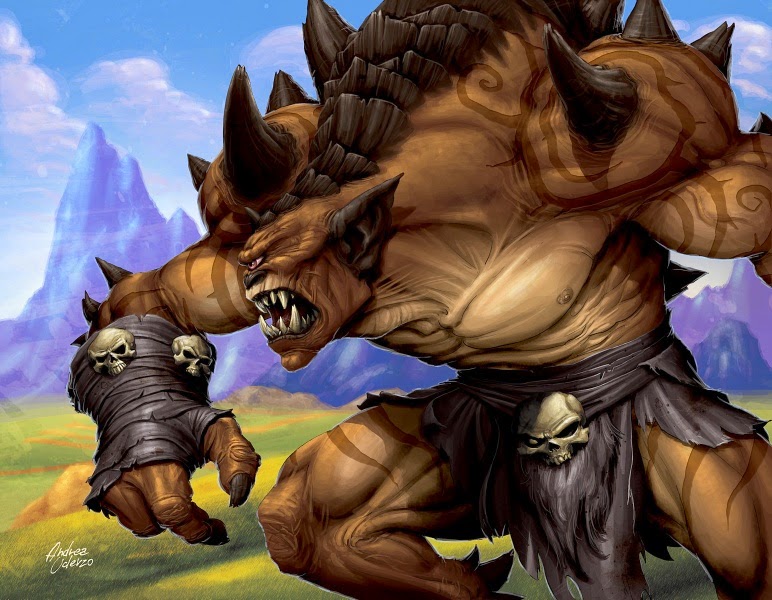 And so the Horde did. In one of the most iconic battles between Horde and Alliance, Thrall and Rexxar, who from there on was called “Champion of the Horde”, beat Daelin’s forces and executed the stubborn general. Jaina already accepted that her mad father was lost long before, and the Horde led by Thrall tried to spare as many innocent humans as possible.

After the battle had come to an end, Thrall invited Rexxar back to Orgrimmar, but he declined. His place was in the wilds of Azeroth.

And once the Dark Portal had been opened after the happenings around the Burning Crusade, the Champion of the Horde decided to return to his homeland Draenor – only to find it terrorized by a gargantuan gronn called Gorgrom the Dragon-Eater, Son of Gruul. In a fierce battle against Gorgrom and his Bloodmaul ogres, Rexxar eventually managed to free his village from the grasp of the menacing gronn.

All mok’nathal were forever gracious – all but one. His father Leoroxx still didn’t accept his son’s actions regarding the Horde – but Rexxar accepted his fate, his history, his relationship to Leoroxx, and decided to let time and the power of the wild heal his wounds.

Up to this day, Rexxar remains an incredibly important part of the original Horde storyline, and the Champion of the Horde continues to support Thrall and the New Horde in their current adventures of Battle for Azeroth.