After two chapters of Book of Mercenaries, Hearthstone’s original single-player adventure Book of Heroes finally takes its turn to tell yet another origin story of Azeroth’s greatest heroes.

The adventure releasing on June 22 revolves around the life of Malfurion, the original Druid hero of Hearthstone. Azeroth knows him as Archdruid of Moonglade or simply “Shan’do”, “honored teacher” in Darnassian, the language of the night elves. Malfurion played one of the most important roles in the history of the Warcraft universe and established druidism as the Warcraft universe knows today.

In this extensive gameplay guide, we will navigate you through the eight different encounters of “Book of Heroes: Malfurion”! 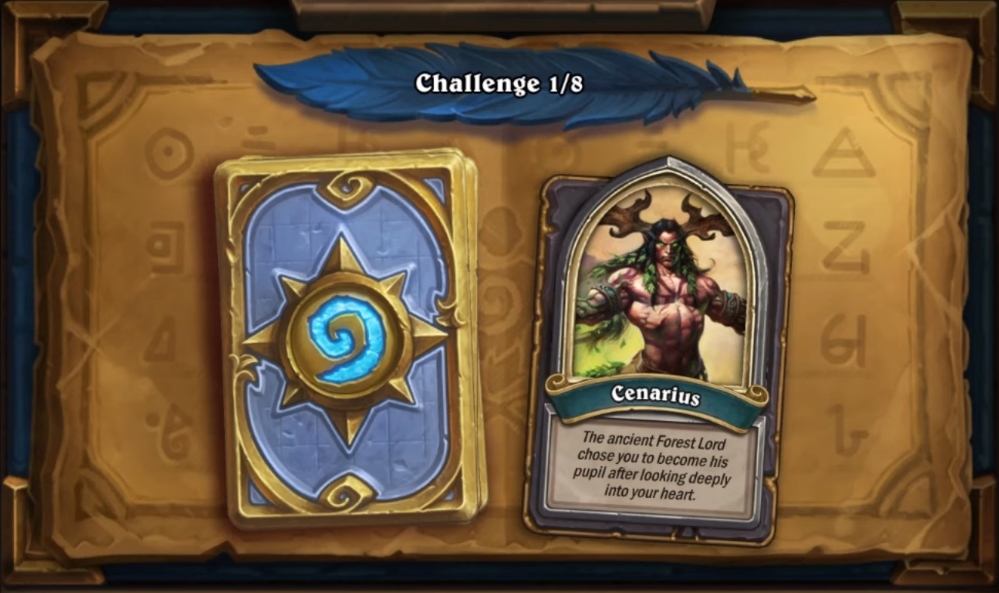 Even the most powerful druid of Azeroth had to be apprenticed in the past – and who would have been a better fit than the Lord of the Forest himself?

As always, the very first encounter of the adventure feels like playing a class tutorial. In Malfurion’s case, Cenarius provides him with several so-called training cards. If we play eight of them, we advance to the next chapter.

It looks like Cenarius gives us three different training cards: Fertilize, Weeding, and Planting. All of them showcase typical Druid spells and are easily usable on-curve. Play your training spells, keep the board clean, and the game should be over on turn 8. 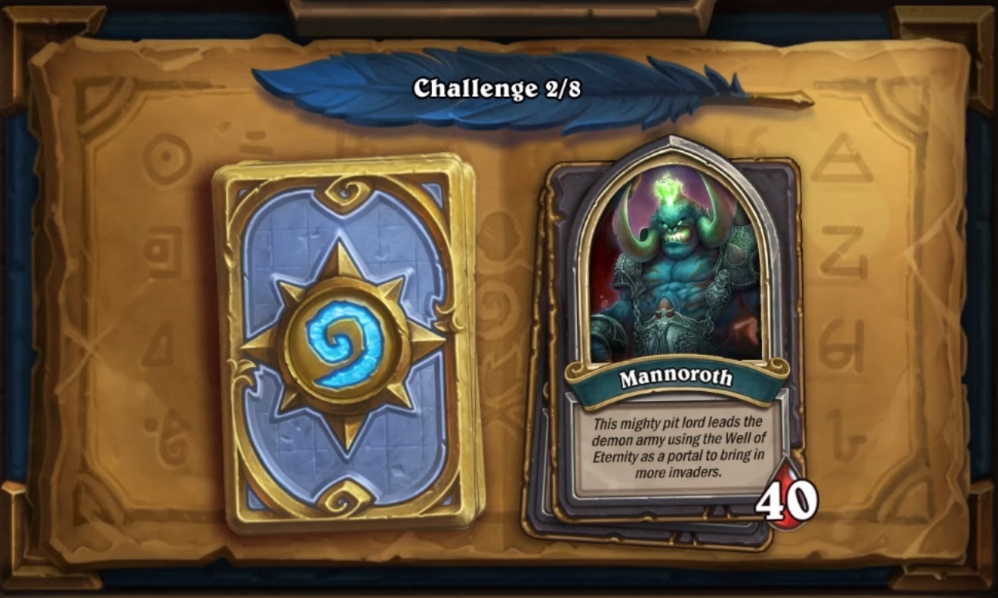 During the War of the Ancients, young Malfurion had to defend his homeland against the Burning Legion in a battle that was never forgotten ever since.

The fight against the evil pit lord Mannoroth starts with Illidan, Malfurion’s brother, and Tyrande Whisperwind on our side of the board. On the other side, we can find the Well of Eternity, a machination of the titans that provides eternal life to the night elves.

Our game plan is straight and simple: We need to defeat Mannoroth as quickly as possible, or else the corrupted well and the demons spawning out of it will overrun the night-elven heroes.

Luckily, we should have more than enough tools to deal with the situation at hand. Besides the overall strength of our classic Druid deck, it is Illidan’s on-board effect that wins the game in the long run. It adds random Demon Hunter spells to our hand, basically providing an endless stream of value, and that is why we should try to keep our dear demon-hunting brother safe at all times.

In addition to that, Malfurion’s hero power has evolved, so use it liberally whenever you’re floating mana. Together with deck-exclusive mid-game powerhouses like Wild Stag and Darnassian Nightsaber, Mannoroth’s well-infused demon army should have no chance against us. 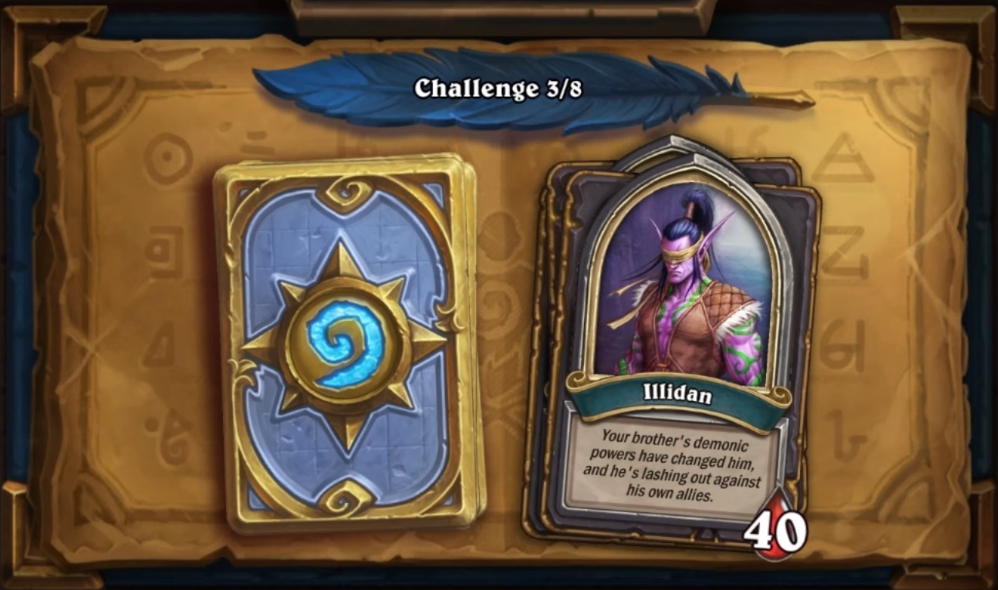 The War of the Ancients had ended – but a war between brothers just started. Illidan created a second Well of Eternity thanks to a vial of well water he had saved during the fight against Mannoroth. When Malfurion’s friend Jarod Shadowsong, Maiev’s brother, found out about the mage’s evil plans, he almost paid with his life. In the end it is Malfurion himself to judge his brother for his crimes.

The battle of the brothers plays out like a typical Druid versus Demon Hunter match. The only real differences are the hero powers used in this epic match: On the one side, Illidan sports his iconic warglaives, while Malfurion is able to use Greater Innervate to gain 1 mana crystal once a turn. However, we can use our hero power only after we’ve already casted a spell – so be aware of that if you want to make good use of it!

As in the early days against Aggro Demon Hunter, it is of utmost importance to survive in the early-game. We have more than enough tools to do that, including cards like Lunar Eclipse or Thorngrowth Sentries. Illidan may go ham with his on-demand warglaives, so the match may at one point become a race. However, his deck has a ton of weapon draws, most of them much worse than the one provided by his hero power. As already said: Stay alive and get up a nice board of buffed Druid minions, and you should be able to come ahead as the more powerful brother! 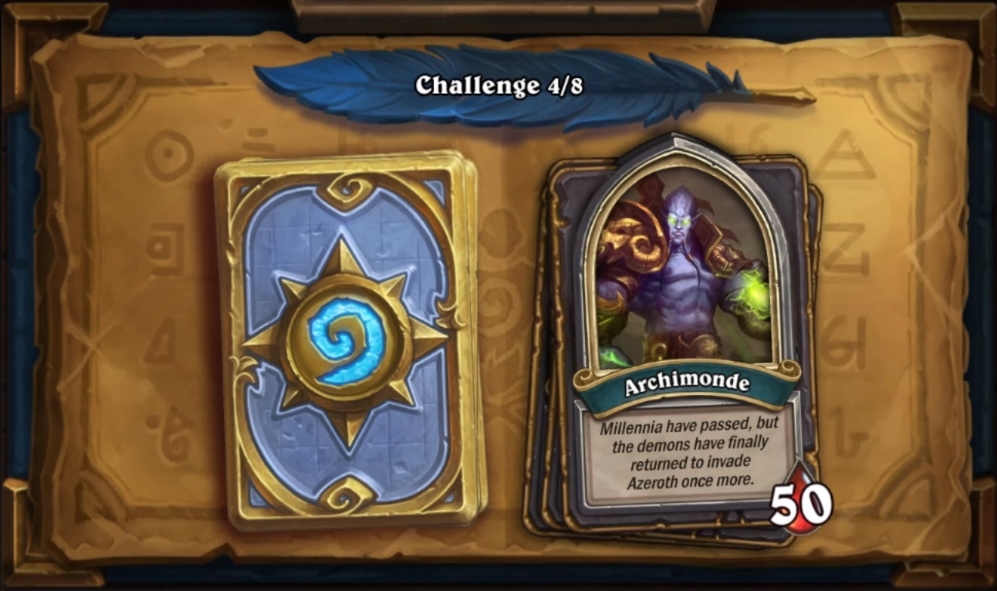 After the War of the Ancients, Malfurion entered the Emerald Dream, and together with several other druids, he spent thousands over thousands of years safe-guarding the spirit realm. In the end, it was Tyrande who woke up his beloved friend from eternal slumber – only to inform him that the Burning Legion arrived once again, this time to destroy Nordrassil, the live-giving World Tree once created from Illidan’s vial of well water.

Long story short: On paper, Archimonde’s hero power is pure insanity. Two 6/6 infernals on Turn 6 are nothing to scoff at, and the invasion only starts from there on!

The only way to handle the infernals is to ramp up as quickly as possible. Try to fish for early copies of Wild Growth and Nourish. What also helps is our new hero power, Ensnaring Roots, which puts one enemy minion to sleep for one turn.

Besides that, both Thrall and Jaina help us during the fight. Spells like Lightning Storm or Blizzard do terrible things to infernals, as you might imagine, so we have time to build a massive board over two or three turns while being able to handle the demonic invasion.

In the end, Archimonde’s infernals are the only thing we need to be afraid of, as the rest of his deck looks like a mediocre Warlock list. Together with our Azerothian friends, we should be able to keep the board under control and finish off Archimonde either through a buffed-up board or maybe even by playing Nordrassil itself! 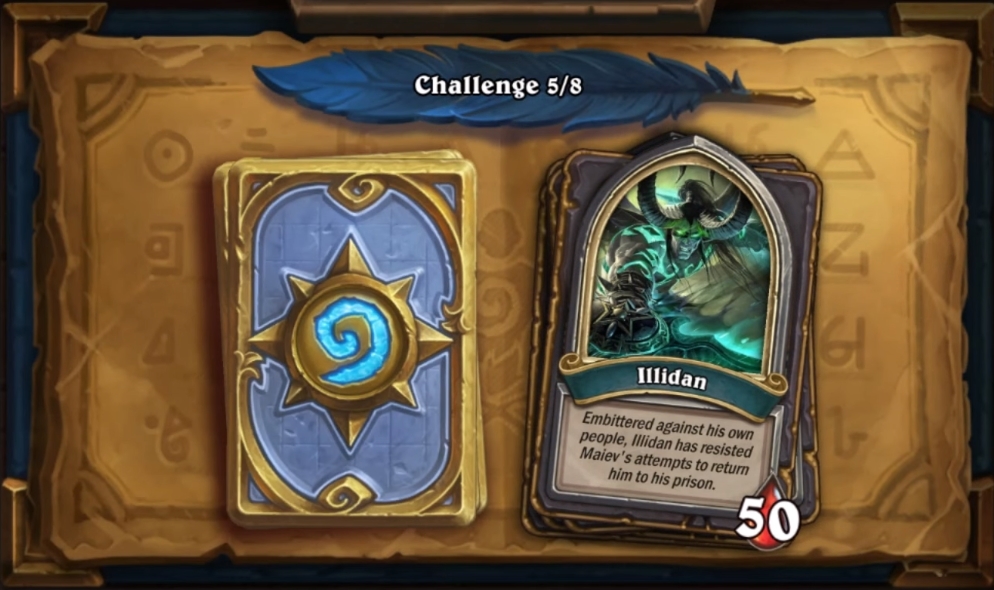 To help against yet another attack of the Burning Legion, Tyrande freed Illidan from his eternal prison that his brother put him into millennia ago – and it was again Malfurion that had to put up with the Betrayer after he exploited Tyrande’s goodwill.

The brotherly face-off begins anew, and the matchup really didn’t change. However, our deck turned into a weird Control Beast Druid archetype. In addition to that, two new cards in our kit will do a great job to imprison Illidan once again. First, there is Maiev, Illidan’s original jailer. She creates great tempo against the few big minions in Illidan’s deck. Then there’s Naisha, one of Tyrande’s lieutenants, and she has the same effect as Moroes from the goold Karazhan adventure. Illidan swarms the board with small minions, so having an invisible token generator almost wins us the game on its own.

The final nail in the demonic coffin is Witchwood Grizzly. Illidan doesn’t have a lot of card draw, so he’ll run into a wall of Taunt minions sooner than later – not least thanks to Menagerie Warden as well.

Once again it is the early-game we need to accept bad trades in to stay alive, while late-game should be all Malfurion’s game. 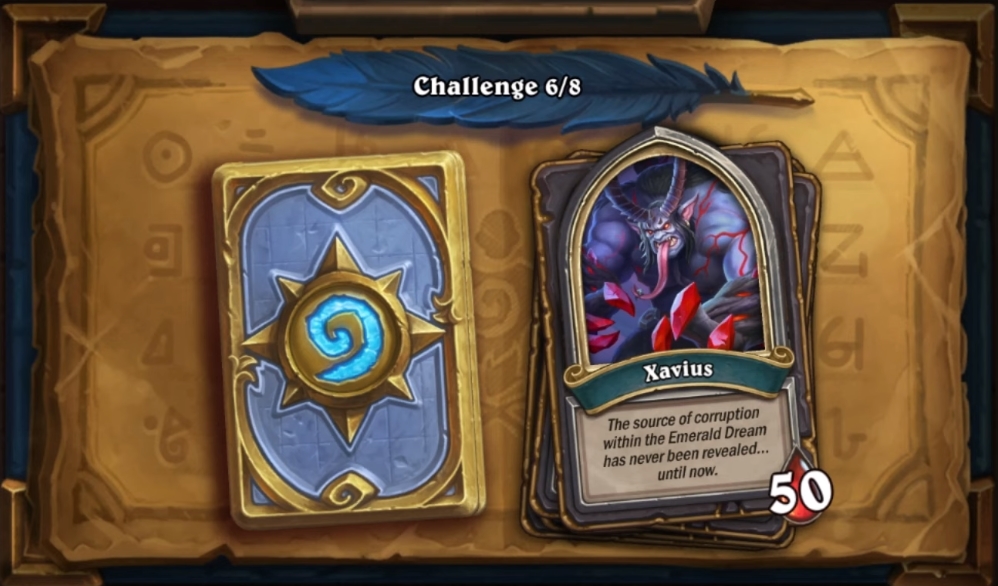 Eventually, Illidan managed to escape to Outland while keeping a truce with his dear brother. Malfurion returned to the Emerald Dream, and over a number of events involving a corrupted druid called Fandral Staghelm, found himself trapped in the Emerald Nightmare, facing off against one of his old arch-enemies.

The difficulty of this adventure picks up the pace during this fight. Xavius’ hero power poses a problem over the whole fight because our minions will slowly start to kill us. Thankfully, we can negate the curse by dispelling our allies – and we should do that in almost any case.

On Turn 6, Malfurion’s old friend Broll Bearmantle joins the fight, and boy, do we need assistance against the Lord of Satyrs. Use his transformed form to trade aggressively because we won’t win the battle for the board early. One main reason for that are Xavius’ copies of Nightmare Demon, two full board-clears attached on a 4/10 minion.

Luckily, Xavius’ deck doesn’t hold a lot more powerful surprises. As already said, accepting bad trades to gain traction eventually has to be our number one priority. Dispell Xavius’ curse, and you should be good to go in the long run.

Last but not least, the new card Powershifting may be the most important puzzle piece in this fight. As soon as you’re ahead on board you can deal insane amounts of damage in Cat Form or heal back to full life in Bear Form. I personally defeated Xavius as a big old cat but don’t underestimate the power of big heals in this matchup.

Don’t overplay the board, take bad trades against Nightmare Demons, and get the most out of your value spells! 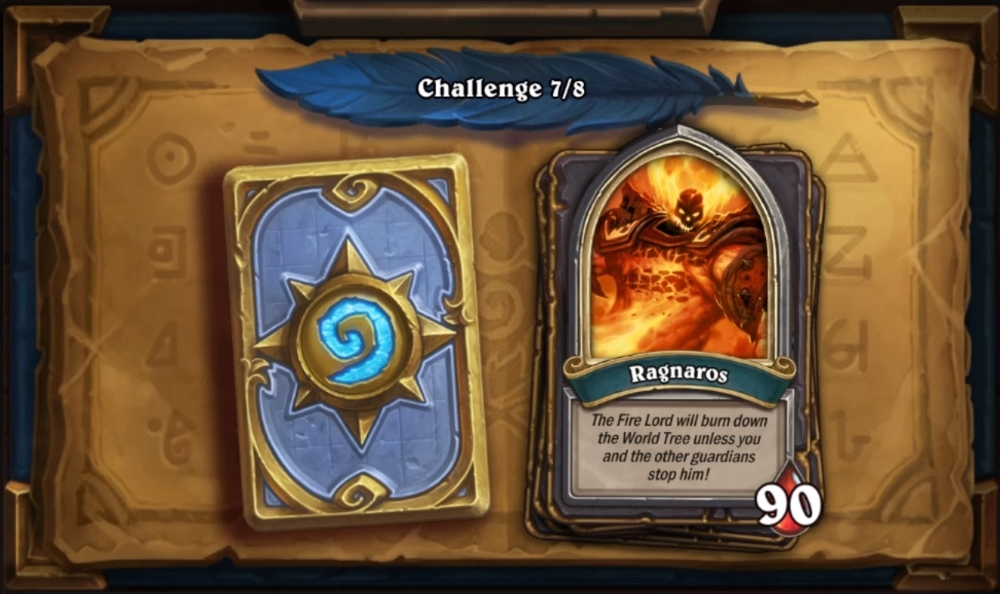 Once Malfurion cleansed the spirit-realm off its corruption, the next threat had been located on Azeroth: Deathwing resurfaced and caused the Shattering, a terra-forming event that almost destroyed the planet as a whole. It also caused rifts in the Elemental Planes and angered the Elemental Lords such as Ragnaros.

Long story short: Ragnaros will hit us and our board for eight damage each turn for 0 mana. That fact makes it crystal-clear that our fight against the Lord of Fire will turn into a race eventually. Fortunately, Malfurion gathered both Hamuul Runetotem and the demi-god Cenarius around him, who will help us to bring Ragnaros back to the plane where he belongs!

For this fight, our deck turns into a token-heavy list. Our mulligan is exceptional, and you will always draw Gibberling on Turn 1. However, you should try to fish for either Power of the Wild or Fungal Fortunes on Turn 1. It may look like we need to play a longer token-value game – but Ragnaros’ hero power is just too strong to keep a board over multiple turns in the mid- or late-game stages.

My advice would be to go all-in as soon as possible. Abuse both effects of your allies to the maximum, and try to bash in Ragnaros’ face over the first few turns. I personally managed to bring down his 90 HP on Turn 5, and I really can’t see any other way to complete this encounter. 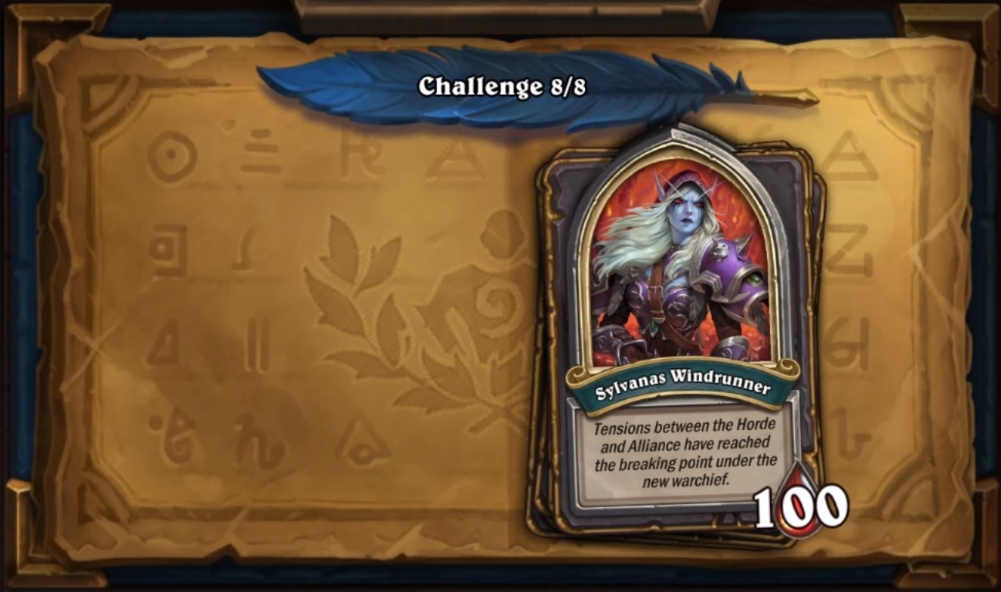 Years later, some time of peace came over Azeroth – until Sylvanas Windrunner became warchief. Malfurion had to once again defend his very homeland …

From a pure gameplay standpoint, this final stand-off feels very weird. Sylvanas’ deck doesn’t really do anything – except when she equips her personal bow. Other than that, she just keeps removing our board over and over.

The removal part, however, starts in the mid-game. That again means that we can establish our only win condition in this game: GIBBERLINGS!

Yes, I’m serious. Our only real token generator involves Gibberling and the great, great hope to get token value out of our two copies of Guidance. It is more important than ever to use Guidance together with Solar Eclipse to maximize spell value because we need anything and everything in the fight against Windrunner.

Throw away the initial mulligan cards – they’re pure bait, believe me. Just try to go for an early Gibberling board and also fish for the second part of our win condition: Powershifting. Our deck has two copies of it, and we need to get in serious face damage early to stand any chance.

Once Sylvanas has less than 30 health, Varok Saurfang joins the fight on her behalf. His minion pool is much more diverse and dangerous. It is of utmost importance to have a good board before you pull the 30-health-switch. In addition to that, having one or even two uses of Cat Form from your Powershifting when Varok enters the fight would be optimal.

With a full board featuring a couple of buffed Gibberlings, your pets together with your cat power should be enough to bring the orc general down – and if not, you should keep Tyrande as a “mini-Alexstrasza” to finish him off. Once you’ve beaten Varok, Sylvanas escapes, and the adventure including a free Druid pack is all yours!