Hearthstone’s third edition of Book of Heroes takes a deep dive into the life of the default Warrior hero Garrosh Hellscream. As one of the main characters of the Warcraft saga he already appeared in Warcraft II, and continued to make an effort to shape the history of Azeroth in both good and bad ways. 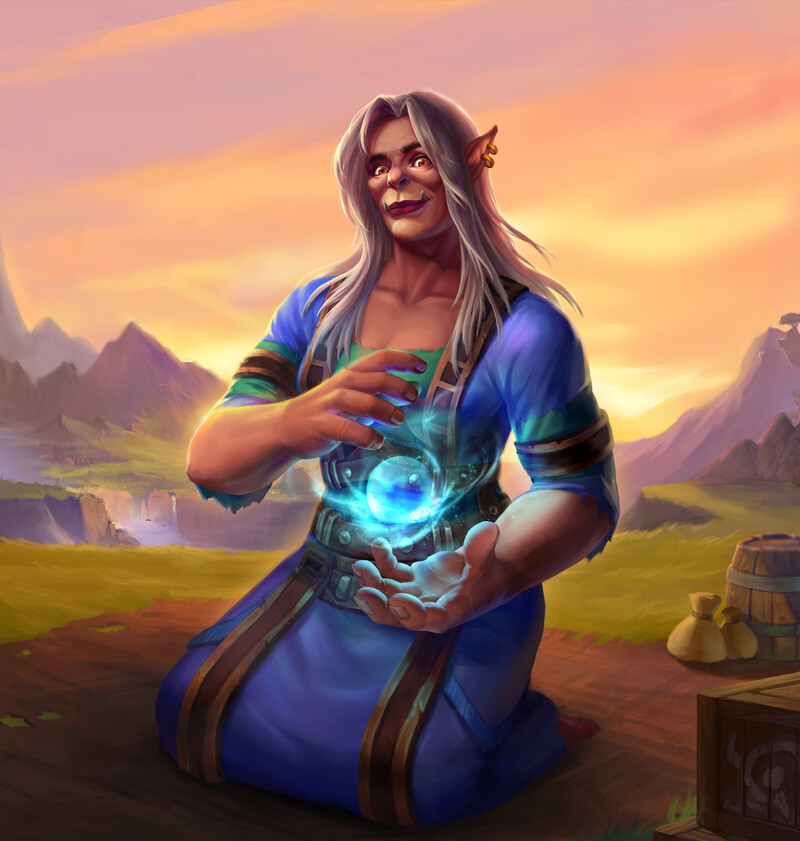 In his early years, the uncorrupted Garrosh was bound to lead the Mag’har orcs of Outland  due to his infection with the Red Pox, a terrible sickness that required total quarantine, created by the ogres to drive the orcs off their lands. Ashamed by the history of his father Grommash, the orc who was first to drink the blood of Mannoroth and thus binding him and his people to the Burning Legion, the young orc didn’t want to know anything about his ancestry.

In the Draenor village called Garadar, Grommash and the other infected orcs were led and treated by Geyah, an elderly Frostwolf orc shaman. One day, Geyah confronts the depressed young orc of the Warsong clan not only with his own history, but also his father’s true legacy. 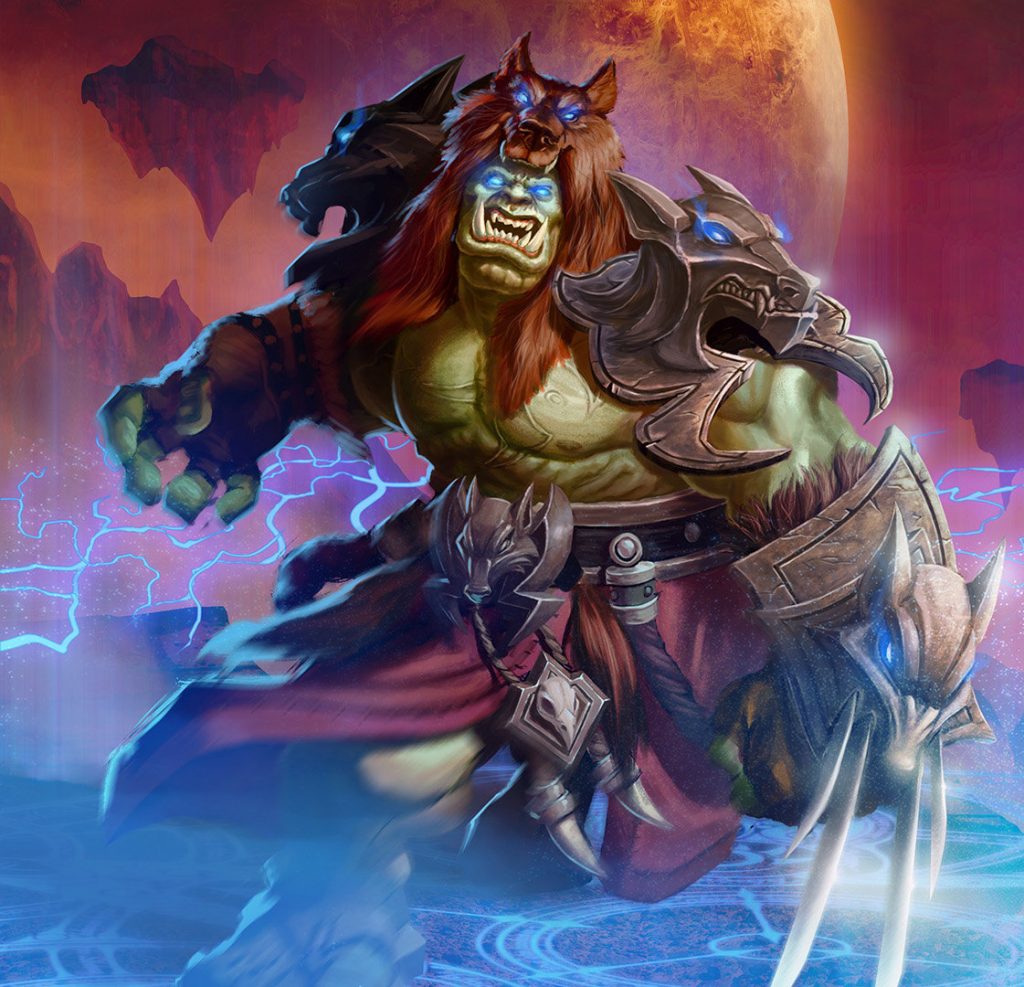 In the end it is Thrall, Geyah’s grandson and leader of the Frostwolf clan, that tells Garrosh the true story of his father. During the invasion of Kalimdor, Grommash redeemed himself and his terrible actions by defeating Mannoroth and thus freeing his people from the chains of the Blood Course.

Garrosh was relieved to hear that his father died as a hero of the Horde, and decided to join Thrall in his adventures on Azeroth as his advisor.

Right from the start, Garrosh’s archaic ideals and brutal ways didn’t click with everybody in the Horde. Rehgar Earthfury, a revered shaman and another important member of Thrall’s military-political entourage, butted heads with the young mag’har orc more than once – especially when it came to the Horde’s relation with the Alliance. While Rehgar always wanted to follow a more peaceful approach, Garrosh intended to end all amicable relations with the people of Varian Wrynn. 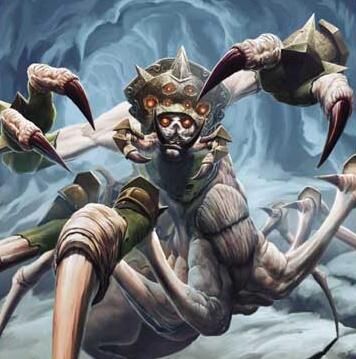 Thankfully, these conflicts didn’t come to a climax, and Thrall kept his intentions to side with the Alliance in the fight against the Lich King and the Scourge of Northrend. He named Garrosh leader of the Warsong Offensive, the army that was supposed to hold back the spread of the Scourge on Northrend.

However, Garrosh, together with his right hand Varok Saurfang, decided to go to war with the local Alliance forces more than anything, but thanks to the incredible prowess and tactical superiority of the Mag’har orc, they managed to keep the Scourge under control at the same time. 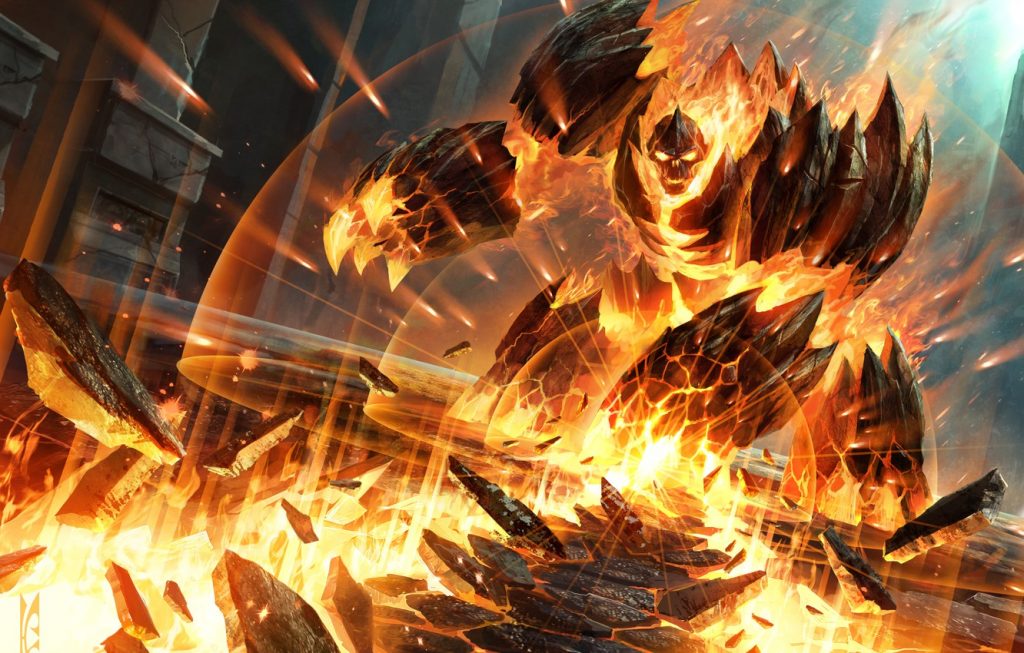 Eventually, both Horde and Alliance take down the Lich King and its Scourge in an epic battle at Icecrown Citadel. But Thrall and Garrosh can’t catch a break. Shortly after arriving in Orgrimmar, elementals suddenly begin to attack Azeroth – as if their eternal rest was interrupted by a greater force… 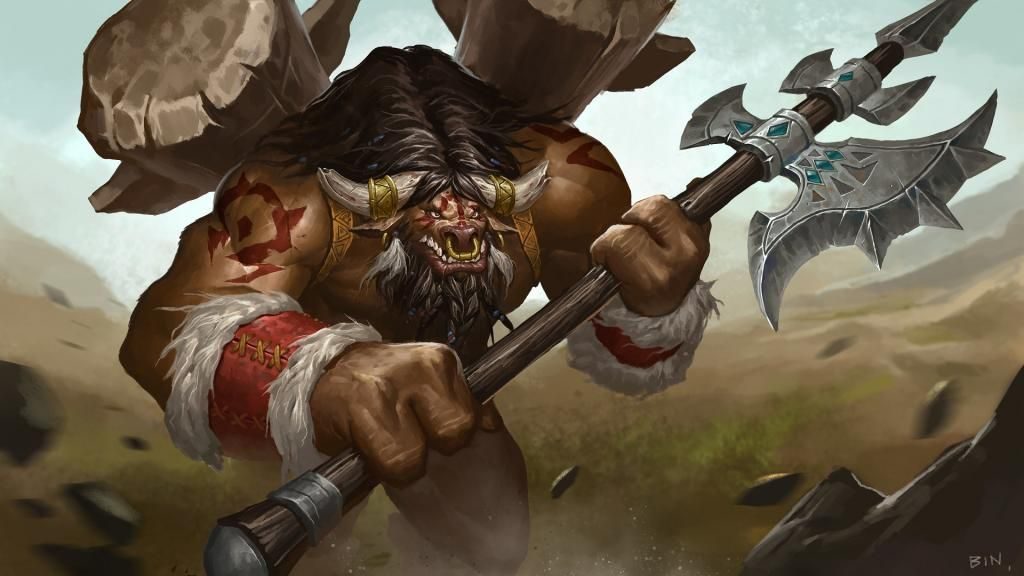 Together with other champions of the Horde, Thrall and Garrosh manage to clear off the elemental threat within Orgrimmar – but they couldn’t prevent the Cataclysm, a global event that resulted in the return of the dragon Deathwing and changed the world of Azeroth like never seen before.

In order to be able to investigate the elemental unrest, Thrall had to name a temporary replacement as acting warchief – and he chose Garrosh. The son of Grommash led the Horde with fierce determination, a style of leadership not really known to the Horde that followed the more modest Thrall.

During Garrosh’s reign, a meeting between the tauren and the night elves was abruptly interrupted by agents of the Twilight Hammer, a fanatical cult of Deathwing followers. What was meant to be a peaceful gathering resulted in a blood bath, and Cairne Bloodhoof, leader of the tauren, suspected Garrosh behind the ambush of the Twilight Hammer, not least because they were disguised as members of Garrosh’s Horde.

Ultimately, Chieftain Cairne challenged Garrosh to a mak’gora, the traditional duel that decides on who will remain Warchief of the Horde. 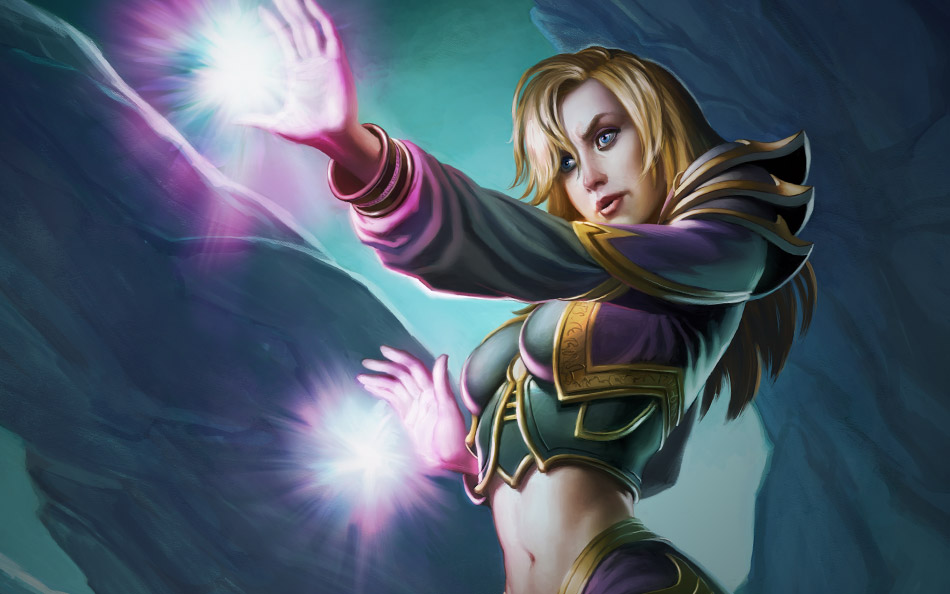 Thanks to help of Magatha Grimtotem, a dubious tauren shaman that secretly put poison on Gorehowl, the mighty weapon of the Hellscream clan, Garrosh was able to easily defeat and kill Cairne Bloodhoof. But Garrosh found out that Magatha defrauded him of a fair fight against Cairne and used him as a puppet in the fight for the leadership of the tauren people.

Therefore he denied her much-needed aid in the fight for Thunder Bluff, the tauren capital, and that resulted in her demise against the tauren troops behind Baine Bloodhoof, Cairne’s son, who was able to indirectly avenge the death of his father. With Magatha’s scheme unveiled, Baine reached out to Garrosh, and the tauren eventually pledged allegiance to Garrosh’s Horde.

However, Garrosh’s dark and bloodthirsty side was not satisfied with the general politics of the Horde, and thus he set eyes on his most beloved enemy once again: the Alliance. 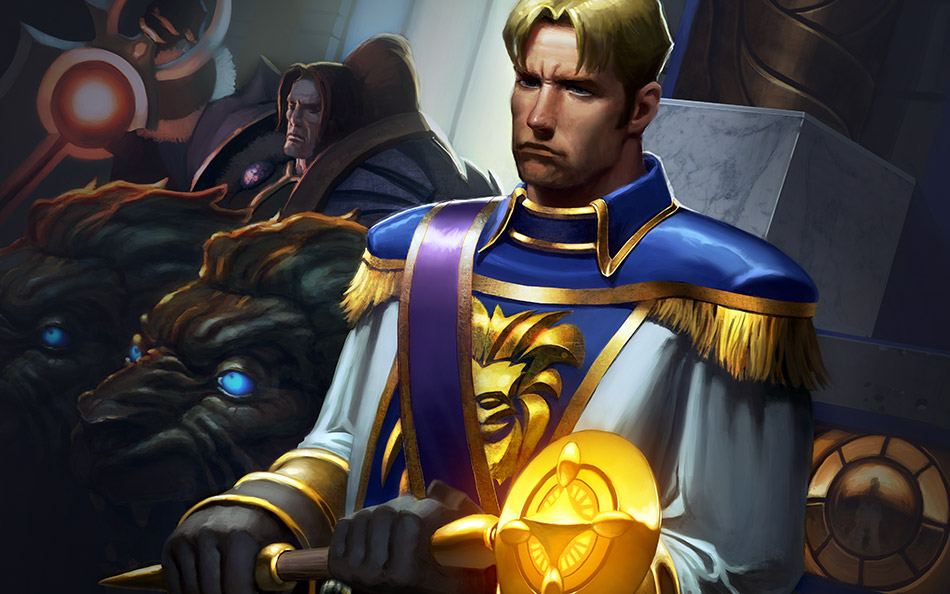 While Thrall dealt with Deathwing and the cataclysmic events around him, Garrosh marched towards Theramore to claim the land for the Horde. His allies were not fond of his methods of war, but Garrosh didn’t care – and used his ultimate weapon, a Mana Bomb infused with the ancient power of an ancient dragon artifact called the Focusing Iris, to fully destroy the Alliance island and everyone on it.

The events around Theramore fed Garrosh’s thirst for pride and honor for the Horde, but he still wanted more.

It was during that time when both the Horde and the Alliance discovered the ancient lands of Pandaria. Thanks to his agents, Garrosh found out about a powerful artifact called the Divine Bell, once used by the Thunder King Lei Shen to command and empower his mogu warriors, awakening their inner “sha” – a manifestation of negative emotions such as anger and hatred.

The Warchief of the Horde eventually obtained the powerful weapon and was ready to use it against the Alliance – but Prince Anduin Wrynn, son of King Varian, did everything in his power to stop the procedure. What Garrosh didn’t know of the existence of the Harmonic Mallet, an equally ancient artifact created by the wise pandaren monks that turns the ear-deafening sounds of the Divine Bell into pure harmony. 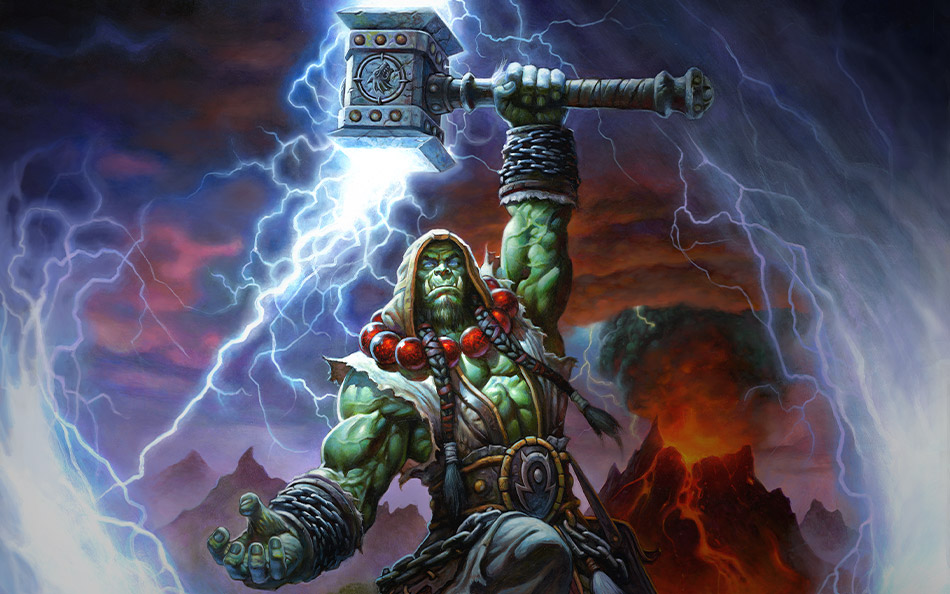 Anduin Wrynn managed to get his hands on the natural counter to Garrosh’s weapon, and was able to crush the bell with his mallet. However, he paid for it with his dear life – or at least Garrosh thought so. The destruction of the Divine Bell caused the temple where Anduin and Garrosh fought to collapse, and the young prince was fully covered in debris.

Despite the destruction of the Divine Bell, Garrosh bathed in the sun of glory after the supposed death of King Varian’s son, and continued his search for yet another, even more powerful artifact: The Heart of Y’Shaarj.

He managed to bring the heart to Orgrimmar, where both the Alliance and the Horde confronted the corrupted warchief. In a hefty battle, Garrosh fully consumed the power of Y’Shaarj’s heart, but ultimately faced defeat against the brave adventurers of the rebellion.

From there on, he has been held captive to receive rightful punishment for the countless war crimes he had committed over the years.

In the end, however, Garrosh’s story is one of the Horde – with all its good and bad chapters. It’s a story of friendship, loyalty, pride and arrogance, and, last but not least, a story that turned the Horde into what it is in Warcraft today.