The Year of the Phoenix comes to a close, but Hearthstone’s Book of Heroes series continues to deliver the tales of Hearthstone’s most important characters. This time around, BoH’s fifth edition tells the story of Anduin Wrynn, now King of Stormwind and leader of the Alliance.

Not many characters in Warcraft lore entered the storyline during their childhood and grew up in the spotlight. The life of Varian Wrynn’s son is an integral part of Azeroth’s history as we know it today and holds up as a great example of Alliance story-telling.

Unlike other Warcraft characters, the youth of Anduin Llane Wrynn is very well documented. Born as the son of Varian and Tiffin Wrynn, Anduin and the royal family experienced a terrible tragedy when Tiffin died during riots incited by the Stonemasons, a group of craftspersons that demanded more money for their valuable work rebuilding the city of Stormwind.

King Varian has never been the same ever since, and although both were connected by a deep love for each other, Anduin had to grow up under his father’s stern austerity. The incredible warrior he was, Varian tried to take the training of Anduin into his own hands, but their problematic relationship as well as the young prince’s lack of interest in martial arts and swordsmanship didn’t help.

That was when Varian decided to send his son to Ironforge, the capital of the dwarves. He hoped that the fierce warriors around Magni Bronzebeard, King of Ironforge, would be able to make Anduin what Varian thought his son would need to become in order to rule in his stead one day – not least because Varian himself had been taught by the dwarves how to fight in his early years.

Sometime after, Anduin found himself in a sticky situation in Ironforge and teleported back to Theramore to seek advice from his dear friend, Jaina Proudmoore. 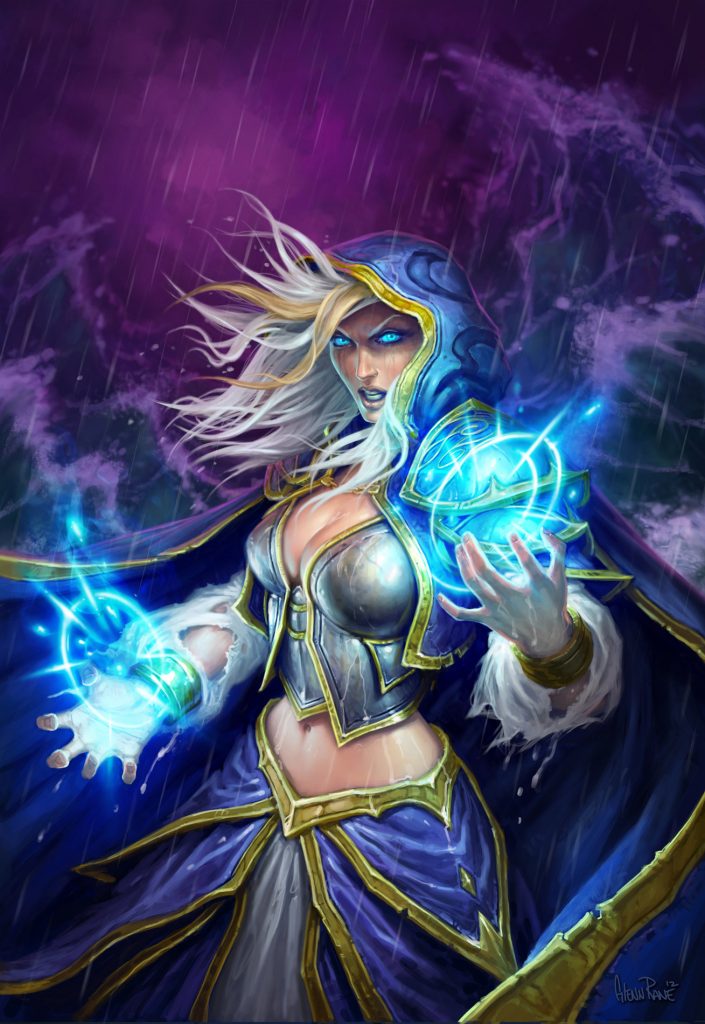 At the beginning of Anduin’s training in Ironforge, it became clear that the way of the warrior was certainly not his. Instead, he slowly found his way to the Holy Light, and his patience and discipline should eventually lead him to become a priest. However, he never neglected his swordsmanship efforts either, mostly thanks to his dwarven mentor Aerin Stonehand.

But then the Cataclysm happened, and Azeroth as a whole was torn apart as Deathwing, the Destroyer of Worlds, resurfaced. Ironforge was hit by terrible earthquakes, and Aerin got killed by falling rubble. Losing yet another important female in his life, Anduin was devastated.

The whole region of Khaz Modan and thus Ironforge faced total and utter destruction during the cataclysmic temblors. King Magni hoped to be able to stop Azeroth’s bleeding by performing a titanic ritual involving particularly magical tablets found in Ulduar. The ritual was a success, but during the process, Magni had been turned into diamond as some sort of sacrifice to the heart of the earth itself.

And if that wasn’t enough, Moira Thaurissan, Magni’s daughter who he had lost to the evil dark iron dwarves, knocked at the gates of Ironforge to reclaim the throne after her father’s demise. By this time, Anduin served as an Alliance diplomat in the city of the dwarves. He informed his father about the recent events in and around Ironforge, and Varian, leading the Alliance with a heavy hand, planned a secret assassination mission to free the city from Moira’s reign. But Anduin knew the true story behind Moira’s intentions and wanted to prevent a bloodbath.

This aforementioned sticky situation led Anduin to meet with Jaina Proudmoore yet again, and her council yet again was worth its weight in gold … 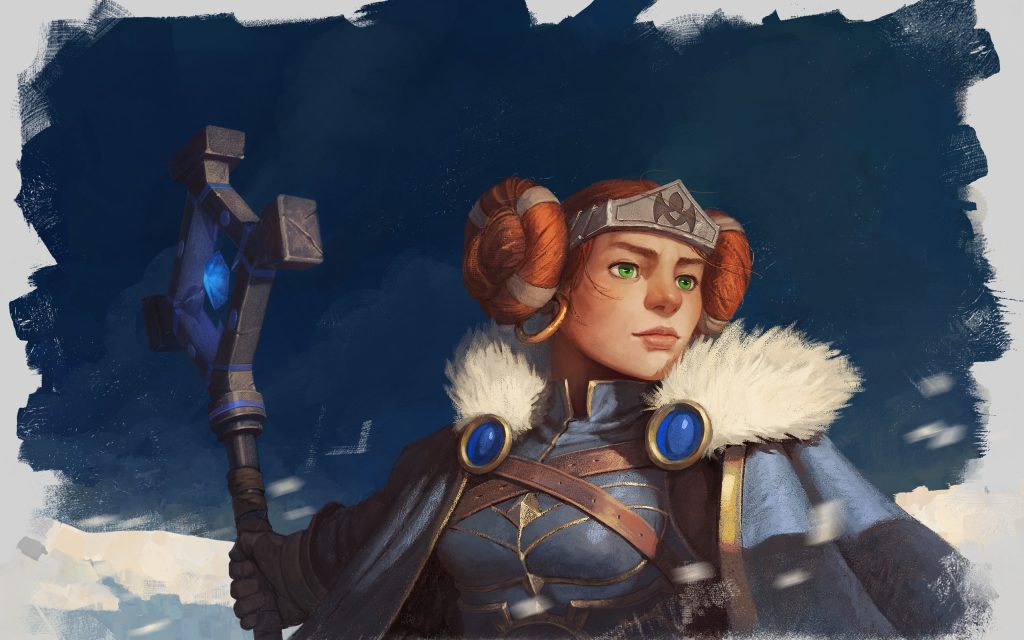 Jaina helped Anduin return to Ironforge in order to stop his father and his entourage of SI:7 assassins.

Over his time in Ironforge, Anduin learned about Moira’s fate, mostly through stories from his dear friend Aerin. The daughter of Magni never felt accepted, and the king of the dwarves always wanted a son as heir to the throne more than anything. One day, Moira was kidnapped by the iron dwarves and their leader Emperor Dagran Thaurissan. The renegade dwarf clan resided in Blackrock Mountain where they served the elemental Firelord Ragnaros.

In an attempt of political finesse, Thaurissan intended to marry Moira and through that gain live-long immunity against attacks from Ironforge. However, they both fell in love with each other, and after Thaurissan’s death caused by Magni’s troops, Moira was infuriated. When she learned about the demise of her father, she and her troops marched towards Ironforge to reclaim what is rightfully hers.

With that knowledge, Anduin was convinced that his father’s plan to assassinate Moira would have been a step in the wrong direction. The dwarves needed unity, especially after they’ve just lost their king during a titanic ritual to serve their homeland. 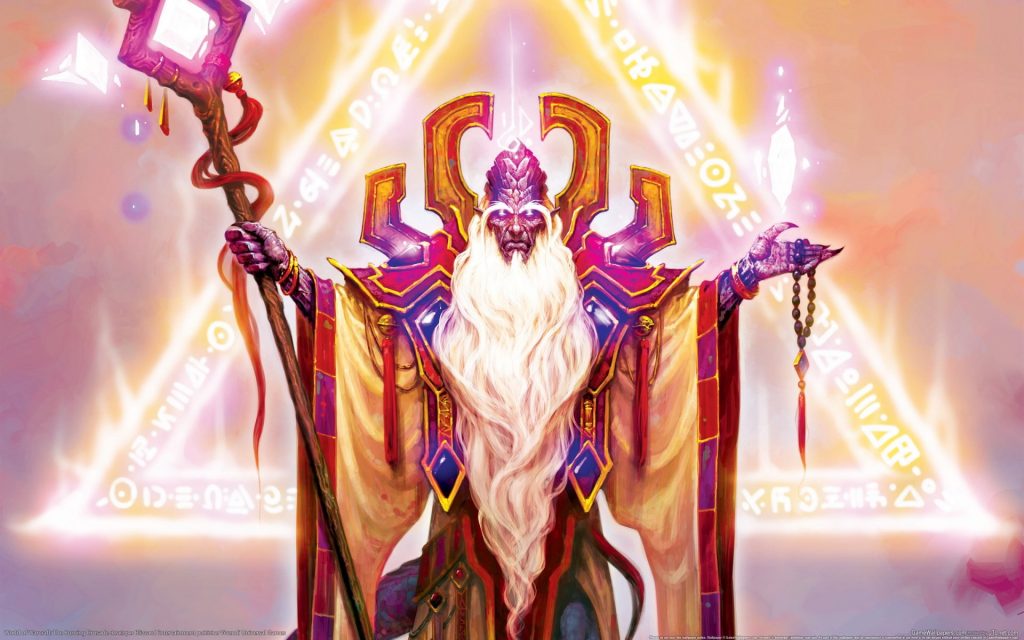 Luckily, Varian trusted Anduin’s instincts and didn’t kill Moira Thaurissan. Instead, he ordered her and the other dwarven leaders to form the Council of Three Hammers, a council that still rules Ironforge today.

From there on, Anduin supported his father in political matters on the regular. During a meeting in Darnassus, capital of the night-elves, Anduin met Prophet Velen, leader of the draenei and one of the most powerful priests of Azeroth. The prophet saw incredible potential in the young prince and invited him to the Exodar, an interstellar ship that served as the draenei’s capital city, to learn about the Holy Light.

Varian, however, was not amused. He wanted Anduin to stay in Stormwind and even asked him to train under Archbishop Benedictus. But Anduin insisted on leaving, and even though his father strongly disagreed, the young prince accompanied Velen back to Azuremyst Isle where the Exodar was located.

And Anduin’s decision to follow Velen into an adventure learning about the Light was a wise one. He learned quickly, especially because his relationship with Velen was bidirectional: The young prince was taught about the Light while Velen revised his stance about the universe, Azeroth, and the role of the Alliance and the draenei thanks to the teachings of his student.

During that time, Anduin continued to stay in contact with Jaina Proudmoore, the powerful mage he called his “aunt”. One day, the Horde attacked Theramore, Jaina’s home, an important Alliance outpost. The attack led by Garrosh Hellscream went down as one of the cruelest war crimes in Azeroth’s history. The truce between Horde and Alliance had been broken ever since, and Anduin from there on chose the path of diplomacy to restore peace. 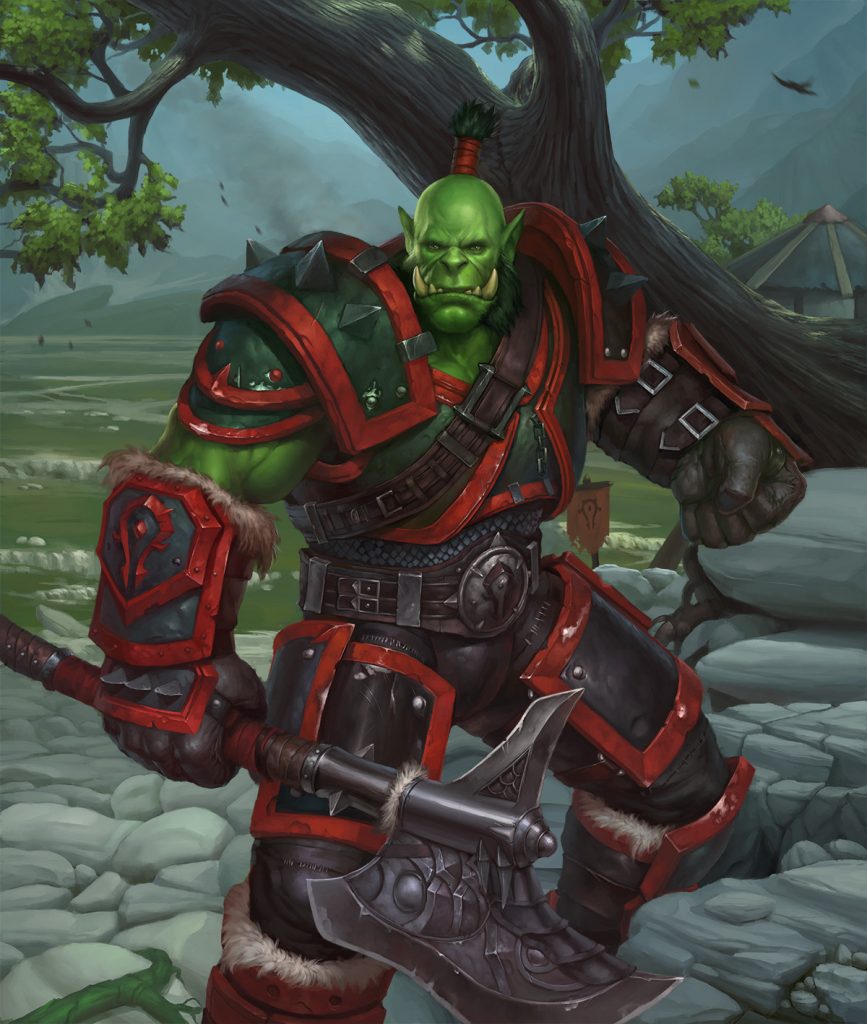 Unfortunately, during a diplomatic mission on the continent of Pandaria, where both the Alliance and the Horde were looking for allies and goods, Anduin got kidnapped by General Nazgrim and his orc troops.

Anduin found himself captured in a camp full of hozen, a race of monkey people, that Nazgrim trained to become possible allies for the Horde. However, the young prince managed to escape the camp eventually – but not without gathering incredibly important intel about the Horde’s battle plans regarding Pandaria … 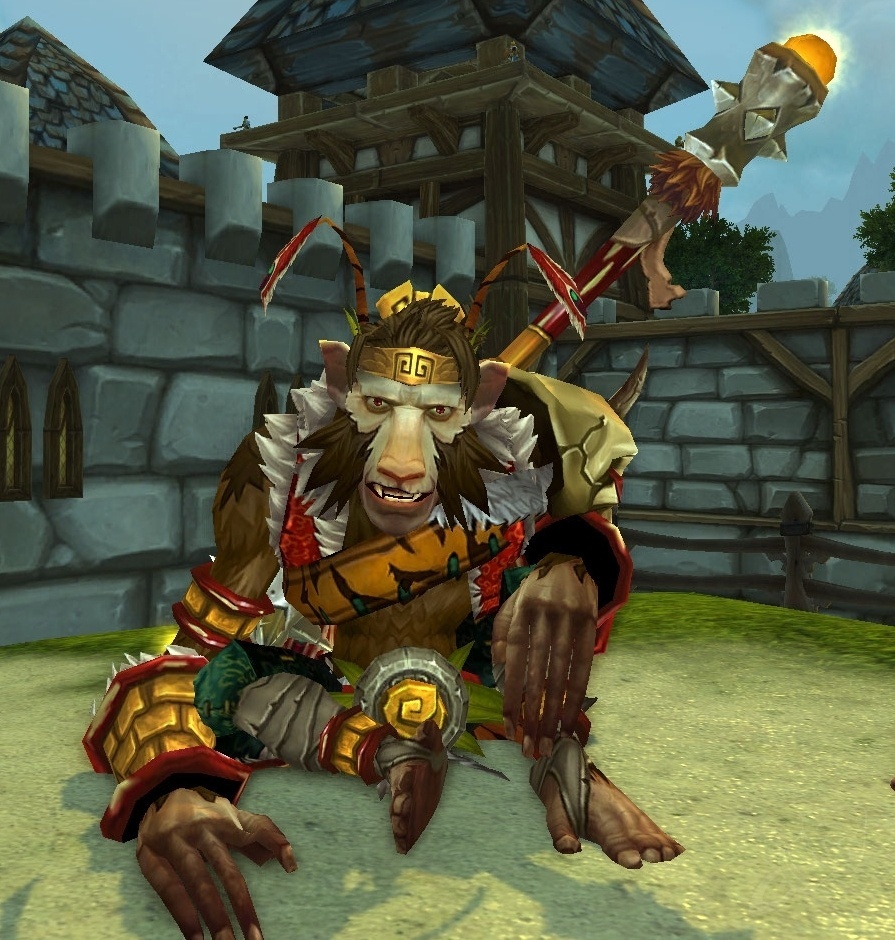 Prince Anduin found out about “Shenqing”, the Divine Bell, an ancient pandaren artifact that Garrosh wanted to call his own. Millenia ago, the Thunder King Lei Shen used this artifact to empower his mogu warriors and terrorized the whole continent.

Garrosh saw the opportunity to use the bell against the Alliance – but he didn’t know that Anduin carried this information with him. After extensive research, Anduin found out that the Divine Bell could be destroyed by a particular tool that was built for just that: the Harmonic Mallet. The only problem? An ancient hozen captured in jade called the Monkey King was the only creature that knew about the whereabouts of the Harmonic Mallet. 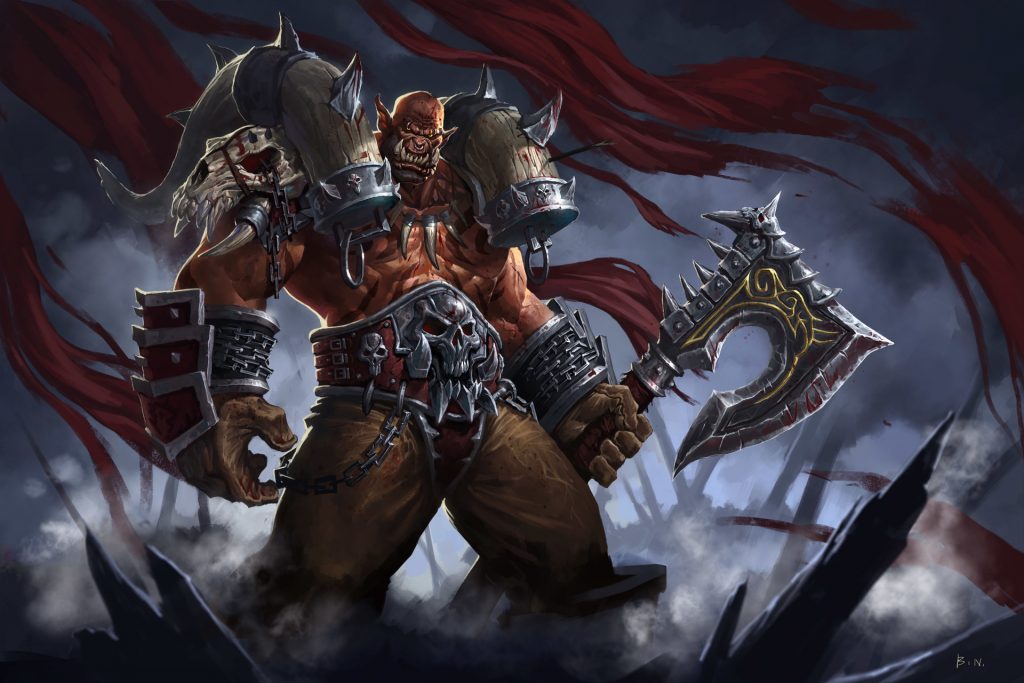 After freeing the Monkey King from his jade prison and solving his three riddles, Anduin managed to recover the mallet.

It was at Emperor’s Reach where Garrosh eventually used the bell for the first time, turning his soldiers into mindless sha minions. Anduin and the Alliance adventurers came right on time, and a battle between Horde and Alliance broke out. Eventually, Anduin managed to crush the Divine Bell with the Harmonic Mallet but got buried by the remains of the collapsing temple around them.

Garrosh thought the young prince dead after the fight and left his body behind. But the Alliance adventurers rescued the living Anduin and brought him to Prophet Velen – from there on, the chronic pain caused by his severe injuries never left Anduin’s side until this day.

The story of Garrosh, however, took a rapid turn. Both Jaina and Varian chased down the Horde’s warchief, and together with the rest of the Horde that stood up against their mad leader, they managed to capture Garrosh Hellscream during the Siege of Orgrimmar. 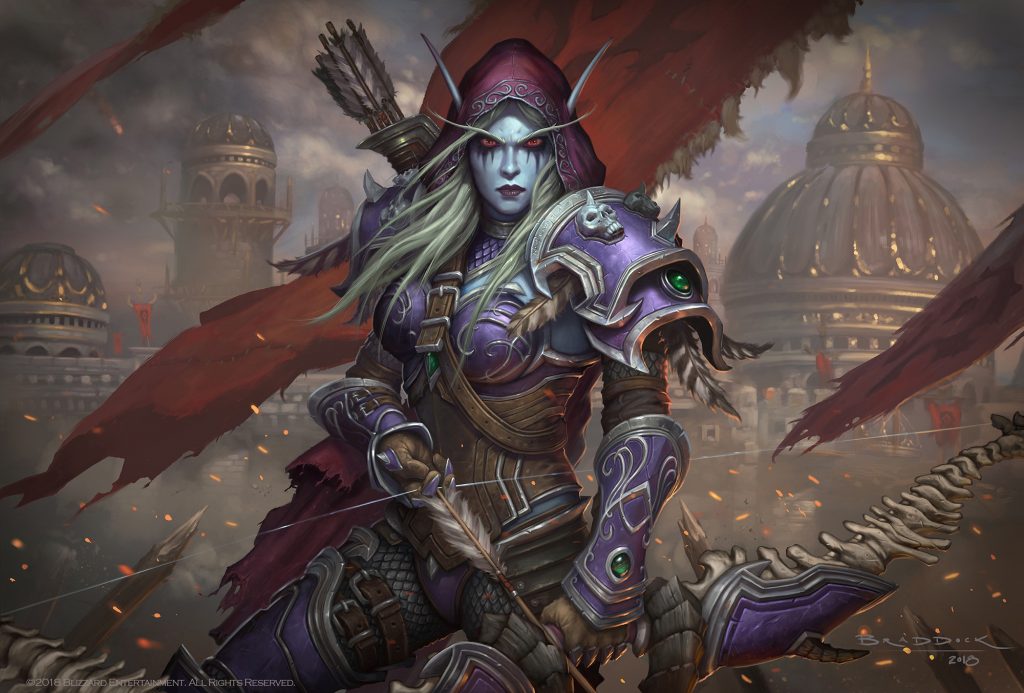 Years later, another mad warchief entered the stage: Sylvanas Windrunner. During those years, Anduin’s father Varian had fallen in battle against the corrupted Gul’dan, and Anduin was named King of Stormwind and leader of the Alliance.

Sylvanas, on the other hand, was named warchief by the dying Vol’jin. What followed was one of the most terrible reigns in the history of the Horde. The once-proud elven archer turned banshee committed several war crimes during her time as the leader of the Horde: First, she killed dozens of Alliance citizens during an agreed meeting between Forsaken and their living families. Then, she burned down Teldrassil, the Crown of the Earth, home to Tyrande and her night-elves, to further provoke the Alliance.

All diplomatic efforts to solve the situation failed miserably, and eventually, the Alliance went out to confront Sylvanas at the Ruins of Lordaeron, or as the Horde called it, Undercity. In the Battle for Lordaeron, both the Alliance and the Horde experienced heavy losses – but the fight was only the beginning of the Battle for Azeroth and the hunt for Sylvanas Windrunner.

Over the years, Anduin turned out to become the king his father wanted him to be – despite all the different routes he decided to take.

The life of Anduin Wrynn, despite his young age, is already a masterpiece of Warcraft storytelling, and with WoW’s newest expansion Shadowlands, the story of the King of Stormwind – the blonde boy, the Little Lion – and his mission to lead the Alliance with both discipline and emotion will undoubtedly continue in style.