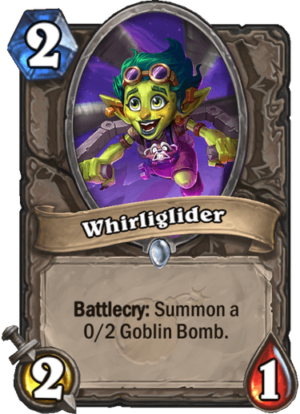 Whirliglider is a 2 Mana Cost Common Neutral Minion card from the The Boomsday Project set!

It has incredibly weak stats, but it summons a Goblin Bomb, so I guess it makes it fair. Definitely bad in a deck that can’t take advantage of the Bomb. But it might be playable in a deck that wants to summon as many Bombs as possible and utilize them. That said, I feel like “Bomb Hunter” has enough ways to summon them already so it looks unnecessary.

Like, it’s similar to Bomb Toss, but it gives you a 2/1 body instead of dealing 2 damage. Deal 2 damage is definitely stronger, because it scales better into the late game, but it’s not the worst thing ever in a deck like that. Overall, okay card in a Bomb deck and bad outside.