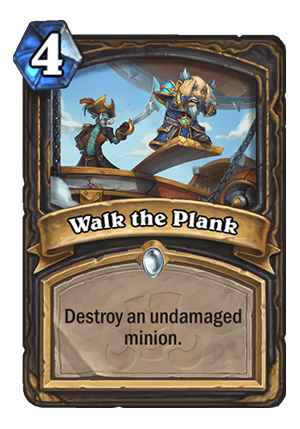 Walk the Plank is a 4 Mana Cost Common Rogue Spell card from the Rastakhan's Rumble set!

Given that you most likely want to remove big minions the moments they’re played, the downside on this card is not that severe. Just remember how solid Shadow Strike was, and this is a bit like a new version of the card. Instead of dealing 5, you destroy anything – that’s good, because you can also kill e.g. 7, 8 or 12 health minions. Unlike with Shadow Strike, you can’t hit face, but that wasn’t an important part of the card anyway.

It’s not a great card, especially that Rogue has access to Vilespine Slayer right now, which for just 1 more mana gets an extra 3/4 body – amazing tempo. But it’s definitely not the worst removal Rogue ever got, so with the lack of better cards, Rogue might want to play it competitively eventually.

Funnily enough, you can even use it for the Mecha'thun combo. “All” you need to do is to discount Mecha’thun once (Galvanizer) or get a Coin from somewhere, then play Mecha’thun on 10 mana, (Coin) + Prep + Walk the Plank. Doesn’t seem that difficult, comparable to other Mecha’thun combos, but then again, Rogue doesn’t have access to tools to keep him alive for as long as let’s say Priest, Warlock or Warrior.

P.S. Oh, and if Even Rogue becomes a thing, it can become removal of choice in the deck… since there’s not much choice outside of it (can’t play Vilespine Slayer).