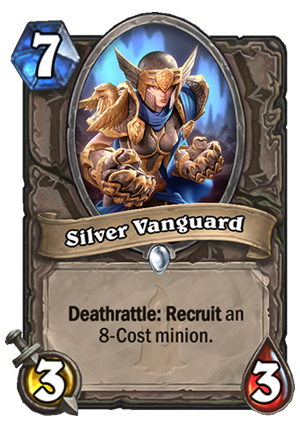 Silver Vanguard is a 7 Mana Cost Common Neutral Minion card from the Kobolds and Catacombs set!

Continuing Kobolds and Catacombs’ trend of “powerful but cautiously costed” cards we have Silver Vanguard. Obviously a huge tempo loss when she is played, you are hoping to make up for it by Recruiting a powerful 8-cost minion, such as Tirion Fordring or The Lich King, which is like… ramping by 1 mana, kind of? First off, you won’t have that many 8-cost cards in your deck, so any one of them that you draw makes Vanguard’s ability worse, or potentially even fizzles it out. Second, it is an entire card you put in your deck in order to ramp out an 8-drop one turn sooner, conditioned on her Deathrattle triggering at all. The only question remaining is “Why?”

To start, you can potentially trigger her ability multiple times with cards like Play Dead and the like. It’s good that she doesn’t care that the 8-cost minion is other than how much mana it is, meaning it can be used for Tirion just as well as to summon Charged Devilsaur. We have already seen a plethora of tools apparently aimed at a slower, “big” hunter deck and this might be one if them. In all fairness, when you are not playing a 7 mana 3/3 for that Deathrattle, it becomes quite good. However, other than Seeping Oozeling, it’s hard to get her ability copied without getting her into play. Since you don’t want to be paying the full mana, you might be looking at how to cheat her out earlier, with either Barnes or another similar effect, but at that point… you could simply cheat out the 8-drop instead, eliminating the middle woman.