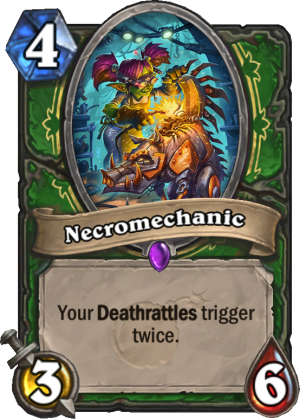 Necromechanic is a 4 Mana Cost Epic Hunter Minion card from the The Boomsday Project set!

If at first you don't succeed, die, die again.
Tweet

In most of the decks, Carnivorous Cube seems better, and you can’t really run both. I mean, technically you can, but Deathrattle Hunter decks already have strong mid-late game shenanigans so it just feels unnecessary. Maybe as an one-of, to make those shenanigans even better. Like if you stick a Cube, then play this + Play Dead, basically no matter what you’ve eaten, this play is going to be massive.

But maybe it has a place in something like Bomb Hunter? There are lots of ways to summon and activate Goblin Bombs, so if you stick a few on the board, this can be a massive burst card. Hard to say, the card has some potential, but might end up like Corpse Widow, good on paper but too slow in reality.